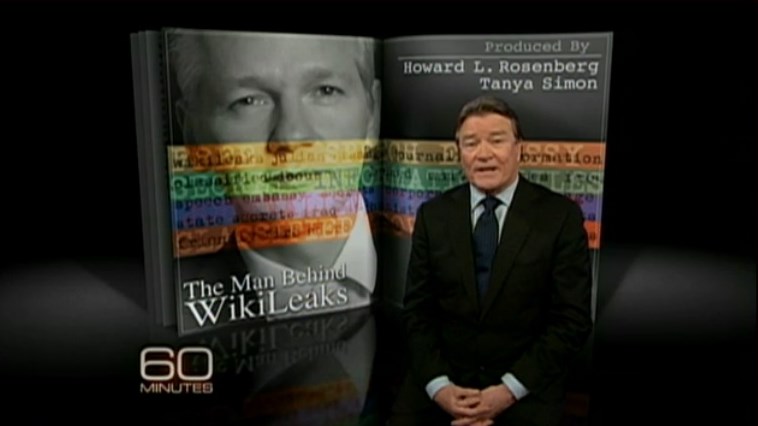 “I just received confirmation from 60 Minutes that a piece on Julian Assange will air Sunday night. He will be the only person featured. We had made a number of suggestions for outside experts and former diplomats to interview to ‘balance’ the piece. 60 Minutes assures me that they raised a number of questions and concerns we planted with them during the course of the interview. We will be prepared to respond to the narrative Assange presents during the program.”

60 Minutes spokesman Kevin Tedesco told CNN Money “The idea of a ‘plant’ is as preposterous as this email writer’s attempt to get credit from his boss...We spoke to many sources for this story.”

CBS chose to only feature Assange in the piece, and no critics on camera from anywhere on the political spectrum. Like WikiLeaks, CBS likes to keep its sources secret. But every viewer should understand that government officials are actively involved in every story on government, trying to affect the spin. As a PR professional, Crowley surely knows the word "planted" wouldn't look good in a publicly release e-mail, but it's a happy word for control-freak Hillary Clinton.

WikiLeaks became notorious for publishing reams of classified documents. Julian Assange -- who has been living in Ecuador's London embassy since 2012, escaping a sex assault charge -- hasn't commented on the email.

On CBS, Kroft gushed about his release of raw data: “Regardless of whether you agree with this idea or not, it beats close to the heart of the Internet, and a younger generation, and it runs through the life of Assange.” This exchange is the closest Kroft came to discussing a State Department view:

KROFT: For somebody who abhors secrets, you run a pretty secret organization.

ASSANGE: That's not true. What we want is transparent government, not transparent people. We are an organization who one of our primary goals is to keep certain things secret to keep the identity of our sources secret so secrecy is an inherent part of our operation.

KROFT: The State Department would make the same argument. They have…doing very sensitive work that they're trying to make peace and negotiate situations around the world. Very delicately. It's very important that they do this in secrecy. What's the difference?

ASSANGE: We don't say that the State Department should have no secrets. That's not what we're saying. Rather, we say that if there are people in the State Department who say that there is some abuse going on, and there's not a proper mechanism for internal accountability and external accountability, they must have a conduit to get that out to the public. And we are the conduit.

These men always appoint themselves the arbiters of what should be secret and what shouldn’t. Edward Snowden, the arrogant leftist living in Russia after leaking classified NSA documents in 2013, tweeted Thursday "New government doc states @60Minutes planted government questions to shape @Wikileaks interview. If true, sad to see."