Time magazine’s Zeke Miller is reporting the Hillary Clinton campaign thinks it’s being tested by women posing as supporters who are working for James O’Keefe and his Project Veritas sting team. “Project Veritas does not comment on investigations, real or imagined,” Daniel Pollack, the group’s director of communications, told Time.

The Clinton campaign is using traditional liberal media to try and smoke out upstart conservative media, and is using Time to either intimidate the alleged conservative journalists or get help from its allies in further exposing this apparent test.

The headline was “Clinton Campaign On Alert For Undercover Conservative Sting: Dirty tricks alleged as the campaign heats up”. Miller reported: 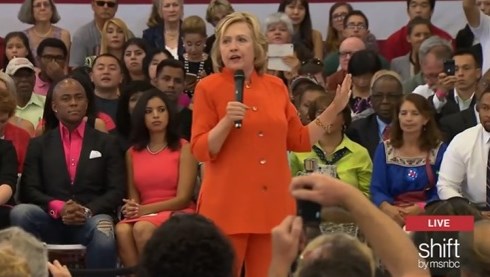 A Clinton campaign official alleges that the women engaged in several efforts to entrap supporters. In one scheme, described by Clinton staff, a woman attempted to pass a cash donation to Clinton volunteers and interns. In another, a woman approached the campaign on Aug. 19 and said both her parents had donated to Clinton the legal maximum of $2700 each and wanted to funnel an additional donation through their daughter, a violation of federal law. On Aug. 13, a woman claiming to be Canadian approached another Clinton fellow to ask how to falsify an address for a campaign donation.

The women presented themselves as Allison Holmes, Jess Koski, and Jess Jones, according to the Clinton campaign, which collected names, email addresses, and phone numbers for the women. All gave the same phone number, which is listed on the website for the University of Minnesota-based Students for a Conservative Voice. Messages left at the number by TIME requesting comment were not returned. The women did not identify themselves as part of O’Keefe’s group, the campaign said.

It is not clear if any Clinton staff or volunteers did anything improper or illegal in response to the approaches. A Clinton official said the campaign is confident it upheld the law....

Photos provided by the Clinton campaign appear to identify one of the women as Laura Loomer, who filmed a video earlier this year at Barry University, which appeared to show a college official backing the creation of a charity to funnel money to the Islamic State called the Sympathetic Students in Support of the Islamic State of Iraq and Syria. Attempts to reach Loomer through Veritas were not successful.

Loomer appears in the photos wearing a navy baseball cap with the Hillary Clinton logo attending a rally for Clinton on July 17 before the Iowa Democratic Party Hall Fame Dinner in Cedar Rapids. That’s where Clinton officials allege she attempted to make cash donations to the campaign.

Miller showed a tilt by noting “O’Keefe rose to fame in 2009 with edited videos appearing to show employees of the Association of Community Organizations for Reform Now (ACORN) encouraging criminal behavior, resulting in the freeze of federal funding to the organization.”

“Appearing to show”? Why do liberal journalists pretend what these videos show is in doubt? (As they presently do with Planned Parenthood!)  In 2009, O’Keefe and his colleague Hannah Giles posed garishly as a pimp and a prostitute and asked ACORN staff in their Baltimore office how to shelter their illegal income from taxes, even as they claimed they were bringing in under-age girls from Latin America to be their sex workers. The reality of this and videos taken in other cities caused ACORN to lose their federal funding, despite minimal liberal media coverage.