Very liberal “Very Rev.” Gary Hall is stepping down at the end of the year after just three years as dean of the Washington National Cathedral, reported Washington Post religion reporter Michelle Boorstein. “Vocal cathedral dean stepping down” was the headline in Wednesday’s paper.

Boorstein began by calling Hall a “fierce progressive” – which made the Episcopal leader a Washington Post and NPR darling. But the paper was much slower to consider the notion that being harshly liberal might be driving donors and believers away from the church. Mainline Protestantism is shrinking. Might it be its increasing disdain for the Bible? 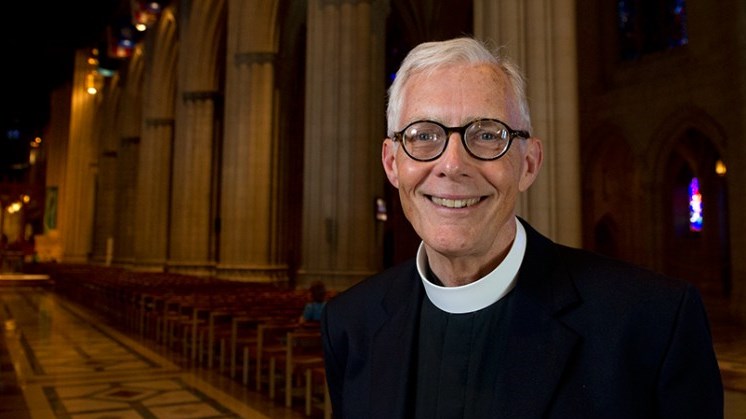 The Post routinely oozed as Hall made waves for describing himself as a “non-theistic Christian,” by starting same-sex weddings in the Cathedral because traditional religion still contained “vestiges of patriarchy, with woman being property,” and by telling Sally Quinn that churches are obsolete, and won’t be around in 10 years.

How ironic it is that now he’s declaring himself too obsolete to be around in 10 years.

But in the last few decades, mainline Protestantism has shrunk in size and stature, as has institutional religion overall – and few places represent that more than the soaring Gothic cathedral. The culture of American fundraising has also changed and the cathedral’s core donors are in their 80s, Hall said.

She noted this large cathedral, legendary for hosting funerals of national leaders, has only 1,400 members and even fewer weekly attendees. But somehow, Boorstein implied Hall’s resignation is an indictment of all organized religion. His “exit leaves D.C. with one less colorful character and exemplifies that institutional American religion is not totally stable.”

At least Boorstein found and quoted an expert to make the case that narrowly tailoring the church to liberals might not be a church-building strategy:

Critics of the Episcopal establishment say a solid path forward isn’t yet clear. Jeff Walton, who directs the program on Anglicanism — the larger global faith community of which Episcopalians are a part — for the conservative Institute on Religion & Democracy, said the cathedral is becoming too narrow with programs focused on contemplative spirituality and left-leaning politics. He noted that while it is accustomed to prominent attention, its regular congregation doesn’t even qualify as a megachurch.

“If they are only projecting that they are for white, upper-class liberals who live in Northwest (D.C.), that’s the only audience they will reach,” Walton said.

Naturally, the Post’s idea of a rebuttal came next, claiming all churches are struggling:

David King, director of the Lake Institute on Faith & Giving at Indiana University, said the dramatic rise of unaffiliated Americans and the decline in worship attendance is impacting funding for all faith communities across the political and theological spectrum. More and more faith-based giving, King said, is going to non-profits, money that used to go to houses of worship.

Part of the reason, he said, is the clarity of vision expressed by non-profits. Some say churches need to be less “political,” but King said clarity of mission is becoming more and more important for people when they give money or time.

If houses of worship can’t locate a “clarity of vision” for their followers, what hope do they have? But in Hall’s case, the clarity of his radical vision was never in doubt. It just wasn’t popular enough.

The liberal media love to declare the Catholic Church and evangelical Protestantism have to embrace their idea of “progress” or die, so it makes sense that they would hesitate to notice that the mainline churches are losing their natural audience of liberals, who increasingly identify as “nones” in religious affiliation.