He suggested from watching the videotape that Planned Parenthood was unethically putting its plans for harvesting intact organs ahead of the health of the women seeking abortions. That’s “a big no-no.” So it’s not surprising that Caplan didn’t make the cut for CNN on air in the two stories Cohen appeared in.

Here’s how they viewed the admissions of senior medical officer Dr. Deborah Nutacola:

Nucatola doesn't specifically say that the price is for the purchase of the tissue, but the comment troubled bioethicist Art Caplan of New York University, who said after watching the edited version of the video it sounds like Planned Parenthood might be trying to make a profit.

Another part of the video also raised concerns for Caplan. Nucatola talks about doctors performing abortions in which ultrasound is used to ascertain the best location to grab the fetus with forceps.

"We've been very good at getting heart, lung, liver because we know that, I'm not going to crush that part," she says.

Altering procedures in order to get tissue in the best condition would be a "big no-no," the bioethicist said, because the patient's health is paramount and that should be the only concern for doctors. Caplan did not comment specifically on whether the ultrasound procedure would endanger the mother, but he made it clear that any deviation from normal procedures is unacceptable.

"In abortion the primary goal is to give the safest abortion possible," Caplan said. "Your sole concern has to be the mother and her health."

There's a parallel in patient care, he said. When someone is dying, doctors shouldn't change how they treat the patient in order to harvest good tissue for donation after death.

Doctors should treat the patient as they normally would, and then use whatever is available after death. If a provider is considering how to get the tissue that's in the best shape, "that's a huge conflict of interest. ... If you modify how someone dies, that's unethical."

But this snippet is the only use of Elizabeth Cohen on CNN, which aired on Jake Tapper’s 4 pm show The Lead on Wednesday and the next morning on Carol Costello’s Newsroom program.

ELIZABETH COHEN: So, what ethicists said to me is, look, if they were giving women abortions and they changed their technique, they changed their practices in order to get the best quality tissue after the abortion, that's problematic.

JONES: Legal or not, the video may be hard to watch.

COHEN: To hear a doctor talking about in between bites of salad and sips of wine will seem like she was sort of matter of fact to some people. Other people might find it disturbing. 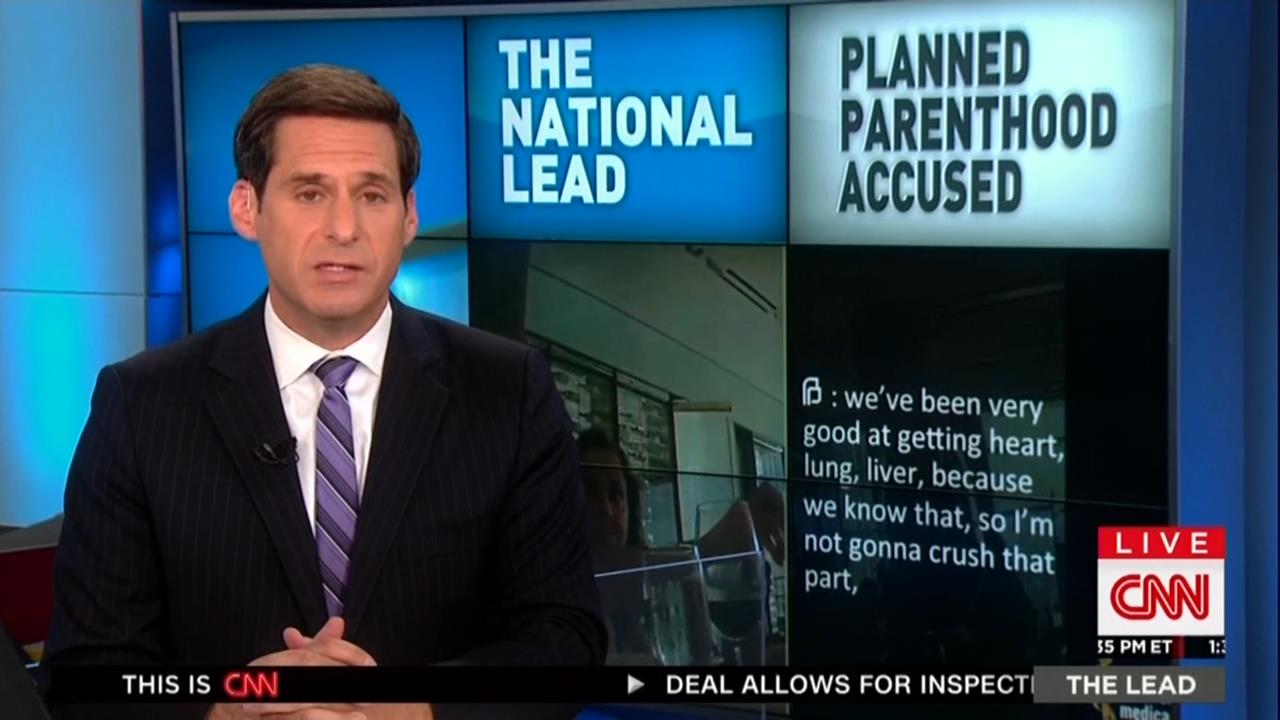 That notion that only some people are disturbed kept popping up. Subbing in for Jake Tapper, CNN anchor John Berman kept suggesting only “some” would be disturbed by abortion babies and selling their organs to laboratories:

BERMAN: The National Lead -- an undercover video that shows a lunch discussion about aborting fetuses and how to preserve the organs for medical research. Some find the language shocking. Some find the topic controversial.

But a key question today, is it criminal? Anti-abortion activists say it shows a discussion about selling organs. That would be illegal. Planned Parenthood says it shows no such thing. What it does show is a senior director of medical services drinking red wine and matter-of- factly discussing hearts, lungs and livers. The language is clinical. And some people might find it disturbing.

Now is that the way CNN promoted say, video of Abu Ghraib and the naked pyramids of prisoners? “Some may find it disturbing”?