Media Ignore: Woman With a Handgun Kills a Mass Shooter With an AR 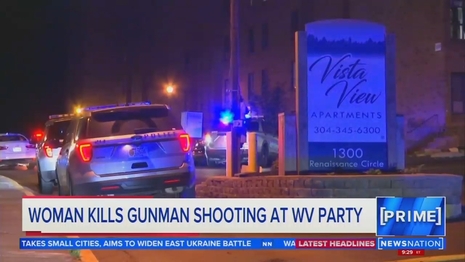 This isn’t the type of story the news media wants you to know about. A woman in Charleston, West Virginia averted a mass shooting last Wednesday, taking down the gunman who was armed with an AR-15.

The networks, as well as MSNBC and CNN buried the story of the unidentified heroic woman. Only outlets like Fox News and NewsNation covered it. Here’s a brief write-up by the Associated Press:

A woman in West Virginia fatally shot a man who began firing an AR-15-style rifle into a crowd of people that had gathered for a party, authorities said.

Dennis Butler, 37, was killed Wednesday night after he pulled out the rifle and began shooting at dozens of people attending the birthday-graduation party outside an apartment complex in the city of Charleston, police said in a statement.

The woman, who was attending the party, drew a pistol and fired, killing Butler, the statement said. No one at the party was injured.

Here's the coverage on NewsNation Prime:

According to local Police Lieutenant Tony Hazelett, “Instead of running from the threat, she engaged with the threat and saved several lives last night.... She was lawfully carrying a firearm and stopped a threat. There was a graduation party and a party with kids so obviously someone just graduated high school and we could have had a casualty shooting.” (For more, see The Reload.)

Rather than report on this type of story, that a woman with a handgun saved countless lives, CBS Mornings co-host Gayle King on Wednesday dismissed the Second Amendment as just about “muskets”:

When we talk about the Second Amendment, I still say they're talking about muskets. They were not talking about the fire power that we have today. Don't we have to make adjustments for that? It seems that we all love children and we all agree this is terrible and we say how horrible it is until the next one happens. And it will happen again. Why is it so difficult to get it right? Why is it so hard to have the uncomfortable conversation that nobody should have an assault rifle unless you are trained professional and you are on a battlefield. Why can't we at least come to terms with that? I don't understand it.

This is King’s favorite talking point. Last week, she huffed, “I keep thinking when the Founding Fathers wrote that they were talking about muskets.”

The anti-gun propaganda on CBS Mornings was sponsored by Progressive insurance. Click on the link to let them know what you think.