If you thought that Hunter Biden was the only First Family member with disturbing financial dealings and foreign connections, you would be wrong. But you could also be forgiven for not knowing about James Biden, brother to the President. Just like his son Hunter, the networks have mostly failed to ask questions about this sibling.

James Biden has concerning associations with Chinese businesses linked to the country’s Communist Party. But even though Joe Biden announced his presidential run back on April 25, 2019, it wasn’t until April 2022 when CBS realized there might be some questionable connections.

Until then, CBS was silent on James Biden. ABC and NBC still have failed to investigate him. On April 6 and 7, 2022, the CBS Evening News and CBS Mornings devoted a combined five minutes and 51 seconds to James. That's the network total in more than three years. 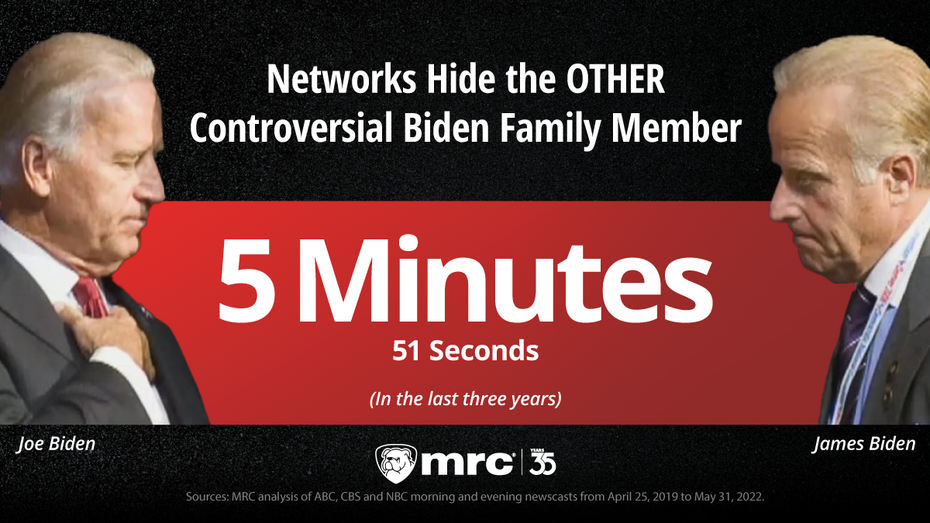 On May 31, 2022, the liberal Washington Post decided to investigate the President’s sibling, highlighting the murky and dubious moves made by the President's sibling. Post writer Matt Viser explained, “From the start of Joe Biden’s political career, James, who is seven years younger, has also walked up to ethical lines his brother has avoided, leaving a complicated trail of business dealings and angry lawsuits.”

Will ABC and NBC relent and start covering James? The evidence isn’t encouraging.

On April 7, 2022 CBS senior investigative correspondent Catherine Herridge explained, “CBS News has learned that more than 150 transactions involving either Hunter or James Biden’s global business affairs were flagged as concerning by U.S. banks for further review. Some of those concerns, including large wire transfers.” (There was an additional 14 seconds on the March 30 CBS Evening News.)

GRASSLEY: I think James Biden was very much a part of this.

HERRIDGE: This week, Grassley released bank records indicating James Biden’s company, the Lion Hall Group was paid directly by a Chinese finance consulting firm. And these are records that come directly from the banks, no third party. 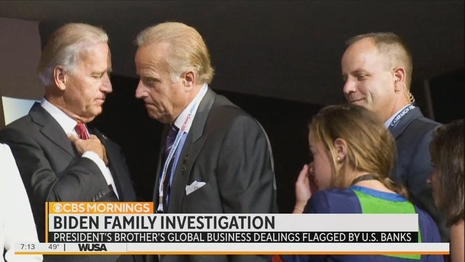 A concerned Grassley added, “We have people with the Biden name, dealing with Chinese business people that have a relationship to the Communist Party. I think it’s very concerning.”

According to a CBSNews.com version of this report, Grassley’s investigation found: “Hunter, James, and James's wife Sara tapped into a line of credit Hunter set up with a Chinese business executive to purchase more than $100,000 in airline tickets, hotels and restaurants.”

But it’s not as though questions about James Biden began in 2022. On February 14, 2020, the non-profit journalism outfit Pro-Publica released a 12 page report entitled, “The Benefits of Being Joe Biden’s Brother.” Generally, the networks are interested in the exposes of ProPublica. In 2020 alone, ABC, CBS and NBC did nine stories on the organization’s investigations. But not on James Biden. This report went ignored.

Jim Biden has been at his brother’s side at nearly every critical junction in Joe’s life. He’s also repeatedly tapped into Joe’s political network for help with his finances, and used Joe’s fame to promote his business ventures.

Jim Biden, 70, has cycled over the years from nightclub owner to insurance broker to political consultant and fundraiser to startup investor and construction company executive. But the through line of his resume was his bond with his brother, a Democratic Party stalwart in a position to push legislation or make government contracts happen. 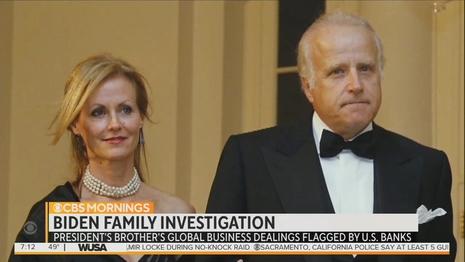 The piece quoted an anonymous Biden aide saying in 2007: “There were always questions about Jimmy’s business dealings — what kind of blowback would there be for the campaign?” Team Biden needn’t have worried. Just as journalists protect the President from son Hunter, they are (with the exception of CBS in 2022) hiding any issues with James Biden.

These concerns of the Biden brother go way back. In an August 2, 2019 Politico story entitled “Biden Inc.,” reporter Ben Schreckinger explained how, in 2006, James Biden viewed the firm he and Hunter bought:

On his first day on the job, James said that Paradigm Global Advisers was, according to an unnamed executive, a way to make money off of foreigners who want to help Joe Biden:

James Biden laid out his vision for the fund’s future. “Don’t worry about investors,” he said, according to the executive, who spoke on the condition of anonymity, citing fear of retaliation. “We’ve got people all around the world who want to invest in Joe Biden.”

James Biden made it clear he viewed the fund as a way to take money from rich foreigners who could not legally give money to his older brother or his campaign account.

In the May 31 Post story, Viser detailed how James encouraged Hunter Biden to take advantage of his dad’s power. Here’s what was found on the infamous laptop:

Hunter also relied upon James Biden, who goes by Jim and is known as Jimmy within the family, on matters of dollars and cents. Within days of that exchange, Hunter received another email from his uncle urging him to take advantage of a financial opportunity related to Joe Biden. The urgency is clear, even if the precise subject is not.

“You need to call me now,” James Biden wrote on Oct. 1, 2017. “Just got off the phone with your father...We have the two biggest days of our business life in front of us!!!!!! We must be smart, or everything goes up in smoke! Please call me. You MUST remain calm. Timing could not be worse. Calm and measured!!!! Paybacks can come later.”

When will the networks start investigating James Biden? Hunter Biden? Their connection to Joe Biden? When Donald Trump was president, journalists saw it as their job to speak truth to power, to make sure democracy didn’t die in darkness. But with the ethically-challenged  Biden family, no journalistic skepticism is allowed.

It’s time for ABC, CBS and NBC to do their jobs. Fully investigate all questionable Biden family members and all their connections.