CRICKETS: Nets Silent on Biden Telling Teachers ‘They Are All Our Children’

Another week, another example of the networks hiding any Joe Biden utterance that might reflect badly on the President and the declining chances of the Democrats to hold on to power in the 2022 midterms. Last Wednesday, at a White House event, Joe Biden declared to a group of teachers: “They are all our children... They are not somebody else's children.”

All three networks, ABC, CBS and NBC, ignored the remark in the morning and evening newscasts. Hosting a Teacher of the Year award at the White House, Biden declared:

While the networks avoided Biden’s bout of honesty, Fox News covered it. Here's Fox and Friends from Thursday.

Last fall, Virginia Democratic gubernatorial candidate Terry McAuliffe said in a debate: “I’m not going to let parents come into schools and actually take books out and make their own decisions... I don’t think parents should be telling schools what they should teach.”

McAuliffe then became the first Democrat to lose the gubernatorial election since 2009. So it’s easy to see why media outlets don’t want to cover a story like this.

Obviously, the innocent explanation for Biden’s comments are simply to illustrate how much good teachers care about their students. And for so many teachers, that is the case and would be the end of the discussion.

But between Critical Race Theory and Florida’s battle for parental rights, clearly the networks are trying to avoid uncomfortable interpretations for the gaffe-prone Biden and Democrats. Especially since 61 percent, according to a new poll, support Florida Governor Ron DeSantis's efforts.

CBS Mornings last Thursday did not cover Biden’s comments, but they did note the event. Journalist Tony Dokoupil explained that winner Kurt Russell (not the actor) was being recognized for his “classes that focus on race, gender, and oppression.”

Here is a brief transcript of the April 28 Fox and Friends. 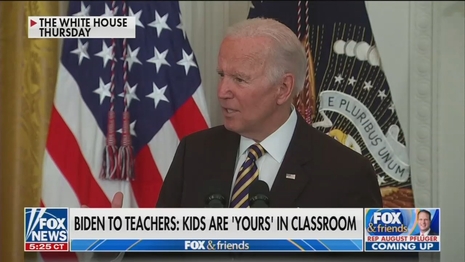 BRIAN KILMEADE: Meanwhile, president Biden naming teacher of the year yesterday and thought would make it clear who is responsible for kids 8 hours a day 40 hours a week. Listen.

JOE BIDEN: They are all our children. And the reason you are the teacher of the year you recognize that. They are not somebody else's children they are like yours when you are in the classroom.

STEVE DOOCY: So the children are yours when they are in the classroom he said to the teachers.