After a 261 day break, NBC on Wednesday remembered that Hunter Biden existed and actually uttered his name. But, of course, don’t think the network has changed. Today reporter Garrett Haake, in his brief mention, insisted that the President’s son is proclaiming “no wrongdoing.” Additionally, Haake made no mention of the fact that The New York Times on March 16 conceded that Hunter Biden’s laptop was real.

After noting that Donald Trump is again talking about the President’s son and his sketchy business dealings in Ukraine, the journalist played clean up: “Now, the Department of Justice is investigating Hunter Biden but he's maintained there's been absolutely no wrongdoing in his business deals.”

The entire discussion lasted just 46 seconds. Before Wednesday, you had to go back to July 12, 2021 for the NBC morning or evening shows to mention Hunter Biden. (Back in July, the scandal of the day was his high-priced art sales as government watchdogs “blasted the agreement.”)

So, even though NBC’s new mention is rather pathetic, the network at least gets on the board. ABC and CBS’s streaks are still going and they are even longer. The last time CBS said the words “Hunter Biden” was on July 10, 2021. ABC? It’s been 333 days, all the way back on the April 30, 2021 World News Tonight. And that was just a quick reference.

(For more, see my March 28th study on the networks hiding Hunter.)

Ironically, despite NBC’s Haake providing cover for the President’s son, it was NBC back on February 5, 2020 that wondered if Hunter’s dealing were “sleazy.” Showing rare backbone, Savannah Guthrie interviewed the then-presidential candidate, wondering:

Do you think it was wrong for him to take that position knowing that it was really because that company wanted access to you?... Don’t you think that it’s just one of those things where people think, well, that seems kind of sleazy. Why would he have that job if not for who his father was?

Of course, once Joe Biden started doing well, and once he was President, the networks suddenly stopped caring about “sleazy” Hunter Biden.

The continued attempts to hide Hunter’s wrongdoing was sponsored by Xfinity and Verizon. Click on the links to let them know what you think.

A transcript of the brief mention is below. Click “expand” to read more.

SAVANNAH GUTHRIE: Meanwhile, Garrett, former President Trump also in the news because of new comments in which he urged Vladimir Putin to release information related to Hunter Biden, the President’s son. What more can you tell us about that? 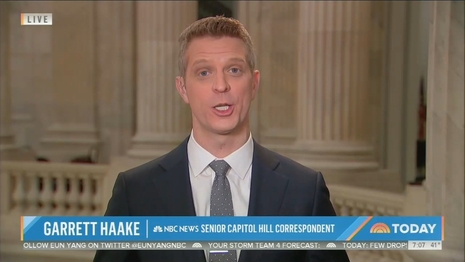 GARRETT HAAKE: Yeah, Savannah, this is pretty extraordinary. In an interview with the right wing website out just yesterday, Mr. Trump calls on Vladimir Putin to release this information about Hunter Biden's business deals in Ukraine. Now, this echoes then-President Trump’s call for Volodymyr Zelenskyy to investigate the Bidens. That led to his first impeachment. Only now he’s asking Putin to do it while Putin is at war in Ukraine. Now, the Department of Justice is investigating Hunter Biden but he's maintained there's been absolutely no wrongdoing in his business deals. Savannah?