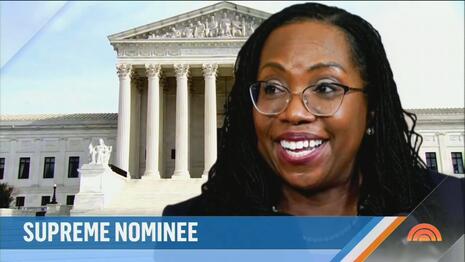 Joe Biden on February 25 nominated Ketanji Brown Jackson to fill the vacancy of Supreme Court Justice Stephen Breyer. When it comes to ideological labels for high court picks, the networks have one rule: Republican nominees are “staunch,” worrisome conservatives. Democratic nominees, however, are rarely labeled as extreme liberals.

In the 24 hours after the nomination went public, the morning and evening newscasts on ABC, CBS and NBC only used the liberal/left label five times for Jackson. In contrast, over a similar 24 hour period after the nomination of Amy Coney Barrett, the same networks deluged the public with 13 labels, showing concern over the “staunchest” of “committed” conservatives.

This partisan split on Supreme Court nominees is nothing new at the networks. Since the nomination of John Roberts in 2005, ABC, CBS and NBC have used 60 conservative labels in the first 24 hours after an announcement of a GOP Supreme Court pick and just 12 liberal labels for Democratic selections. 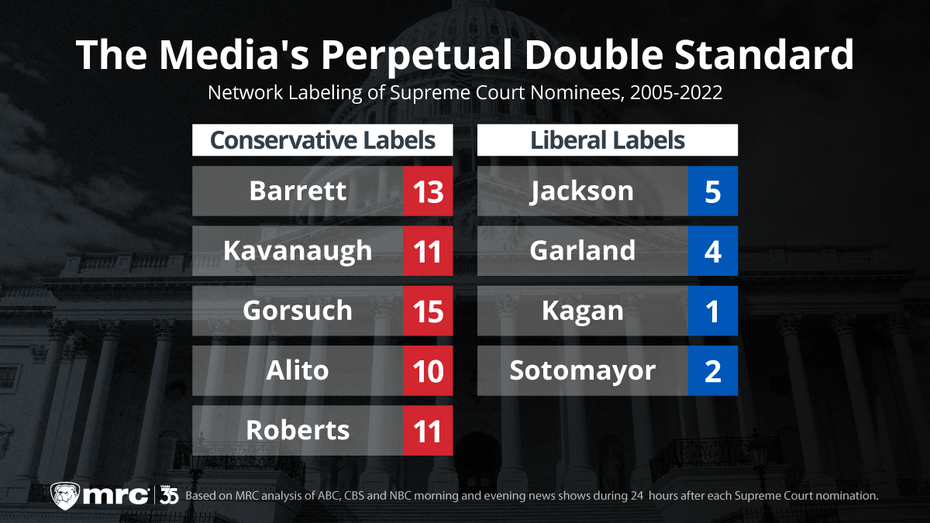 On the February 25 evening newscasts, there were just two liberal labels for Jackson. Both of them were paraphrased comments from Senator Lindsey Graham of South Carolina. On ABC's World News Tonight, Rachel Scott noted the Republican had voted to confirm Jackson as a circuit judge. She added, “[Graham] came out today and called this a win for the radical left.” On the NBC Nightly News, Peter Alexander echoed this, saying, “Graham tweeted [that] the radical left has won President Biden over yet again.”

The morning shows on February 26 repeated the line from Graham. On CBS Saturday Morning, Ed O'Keefe generically noted that Republicans think she's a “a vehicle of the far-left.” In total, there were three more labels, bringing the total in the first 24 hours to five.

Much more common was non-ideological praise, such as Jan Crawford on the CBS Evening News touted Crawford’s “stellar academic and legal credentials and a compelling life story.” She added, “Her resume reads like that of a future justice: Graduating with honors from Harvard and Harvard Law.”

Opening World News Tonight, anchor David Muir singled out Jackson’s religiosity: “Judge Jackson saying her faith got her here, saying she's humbled by this extraordinary honor.”  Most of the segments correctly pointed out the historic nature of Jackson’s nomination and that she is very well qualified.

But that's all quite the contrast to the stern warnings and worry the journalists used when then-President Donald Trump announced Amy Coney Barrett as his choice on September 26, 2020. On that day’s CBS Weekend News, Jan Crawford fretted, “[Barrett] sees the law a lot like her old boss, the late Justice Scalia.... That would make her one of the court's staunchest conservatives.”

On the NBC Nightly News, Hallie Jackson called out the choice: “From President Trump, a move to cement a more conservative Supreme Court for a generation....Unlike [Ruth Bader] Ginsburg, Barrett is a committed conservative. The federal appeals court judge well liked by the President, key Republicans, and many on the religious right.”

On the same day’s Today, Willie Geist warned that Barrett could “lock in a conservative majority for a generation.”

The pattern has repeated itself for President Trump’s other nominees, as well as for Republican George W. Bush and Democrat Barack Obama. 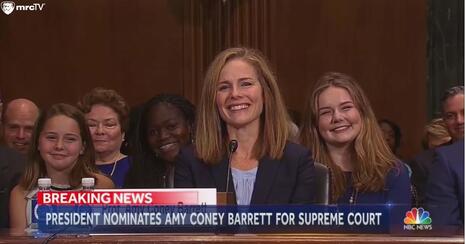 On the same day’s Good Morning America, Terry Moran labeled the nominee a “true blue loyal foot soldier in so many of the conservative legal causes and partisan Republican battles of the past generation.”

In contrast, here’s what former MRC Research Director Rich Noyes found when it came to Democrats:

ABC and NBC’s own correspondents never referred to any of President Obama’s Court selections as “liberal” during their first 24 hours of coverage, while CBS offered seven such labels — two for Justice Sonia Sotomayor, one for Justice Elena Kagan, and four for Judge Merrick Garland, whose nomination failed in the face of GOP opposition.

As the nomination of Jackson proceeds, there’s one thing viewers can be sure of: Journalists will not fret and worry about the “staunch,” “committed” liberalism of the potential Supreme Court justice.

(Director of Media Analysis Geoffrey Dickens on February 23 highlighted the hypocrisy when it comes to the mainstream media: Democratic Supreme Court nominees are never liberal enough.)