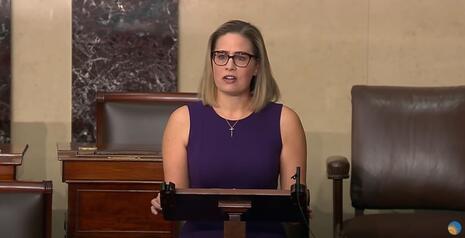 The bullying of moderate Democrat Kyrsten Sinema ratcheted up to a new level on Monday as a far-left media site obtained the Senator’s Social Security Number. This warranted no objection from the network morning and evening newscasts on Monday and Tuesday.

And it comes after similar collective yawns by ABC, CBS and NBC after Congresswoman Alexandria Ocasio-Cortez called for “brass tacks” to be used against Sinema, later demanding that Sinema’s life be made “as difficult as possible.”

The Gawker article trumpeted the SSN with this excited headline “WE HAVE KYRSTEN SINEMA’S SOCIAL SECURITY NUMBER.” The number was given to Gawker because a change made in Arizona to protect privacy didn't go into effect until the 2000s. Writer Tarpley Hitt bragged, “The records also included some other intriguing information. Specifically, they included Sinema’s social security number, bank account information, and drivers’ license number.”

Gawker even disgustingly included a fake SSN at the top of the article so as to provide click bait for the angry, leftist base. Here’s the phony number:

Later in the article, Hitt pranked, “For the record, out of respect for Sinema and because we like our jobs, we won’t be publishing her [real] number.” The whole article echoes with an unspoken tone of what could happen if the number falls into the wrong hands:

You can do a lot with a Social Security Number. Unfortunately, if the number in question isn’t yours, most of what you can do with it is a felony. For example, we were hoping to run a credit report on Sinema. But that seems to be illegal if you are not, per Legal Beagle, “a business or individual qualifying a person for a job, insurance, government benefits or tenancy.” (One might argue that any of Sinema’s voting constituents are technically “qualifying [her] for a job,” but none of us is registered to vote in Arizona). We also considered wiring a deposit of $0.69 into her bank account. No theft there. It’s more like a campaign donation and every dollar counts. But the legalities seemed iffy.

One could say that Gawker even doing this article is a blueprint for any nefarious individual or organization who wants to obtain her Social Security Number. And after all, this is the same Gawker was forced to pay wrestler Hulk Hogan $31 million after obtaining and publishing his sex tape. Not exactly a bastion of journalistic integrity.

Last week, Fox Business anchor Stuart Varney played a tweet of Ocasio-Cortez calling on Senator Chuck Schumer to make Sinema’s life “as difficult as possible.” Varney wondered, “Is that politics or is that kind of bullying?”

At the end of January, the socialist Congresswoman said of Sinema: “I think we need to play hard ball.... I think we need to go brass tacks.” When an ex-Obama aide slimed the moderate Senator as a “cunt,” “bitch,” “asshole” in a podcast, the networks were similarly silent. Earlier in January, CNN commentator Robert Reich called on Democrats to give Sinema “the back of their hands.”

Last December, I wrote about instances of bullying or harassment that Sinema and fellow moderate Democrat Joe Manchin suffered. They included: Protesters surrounding Manchin in his car, screaming and swarming him. Leftists activists disrupting a wedding Sinema was officiating. They also followed the Arizona senator into a bathroom.

Obtaining Sinema’s Social Security Number, Reich joking about violence against her, the harassment and bullying of the last two moderates in the Democratic Party is escalating rapidly. But journalists don’t seem to care. Do the ends of ends justify the means?