STUDY: How the Networks Buried One Year of Biden’s Disasters, Failures and Controversies 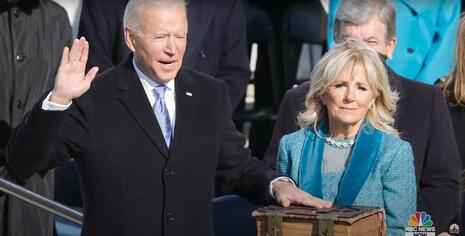 Over the last year, the three network evening newscasts have done their best to hide Joe Biden's policy disasters, such as Afghanistan and the border. They have ignored controversies involving Hunter Biden, as well as extremist nominees picked by the President.

On the occasion of his first anniversary in office, MRC analysts looked at the most neglected Joe Biden stories in year one to see just how little broadcast network evening newscast coverage they got. Here they are:

Hiding Hunter’s Scandals and His Sketchy Connections to Joe

During the 2020 presidential elections, the networks did everything they could to hide the evidence of Hunter Biden’s corrupt dealings with Ukraine and any connection to Joe Biden. For the first year of Biden’s presidency, Hunter’s alarming art sales to unknown individuals and his dealings with China, they were all buried by the networks.

The last mention of Hunter on the network evening newscasts came on the July 12 NBC Nightly News. There, anchor Lester Holt chided the “secret art sale by President Biden’s son.” He warned, “The asking price? Up to half a million dollars per painting. But ethics watchdogs are blasting the arrangement.”

Yet, when five prints of the painting sold in October for $75,000 each ($375,000 total), NBC and the other corruptly ignored it. As the New York Post explained: “It’s unclear who purchased the reproductions — which cost a fraction of the top price of $500,000 for an original piece by President Biden’s scandal-scarred son — or if any more were sold after the LA show opened.”

Finally, in the last year, there were no mentions of Hunter allegedly using the N-word or of a second stolen laptop. (For more on those scandals, see an October 2021 study by MRC Director of Media Analysis Geoff Dickens.)

In 2021, the number of migrants apprehended at the southern border was the highest in 20 years, repeatedly shattering records, but the evening newscasts did their very best to drop the story whenever possible. In December, ABC and CBS allowed less than a minute combined: 17 seconds on World News Tonight and 20 seconds on the CBS Evening News.

The NBC Nightly News did slightly better, managing a still unimpressive 3 minutes and 43 seconds. Shockingly, this combination of 260 seconds is better than November. But anything would be superior to November as the three evening newscasts offered zero minutes and zero seconds that month. 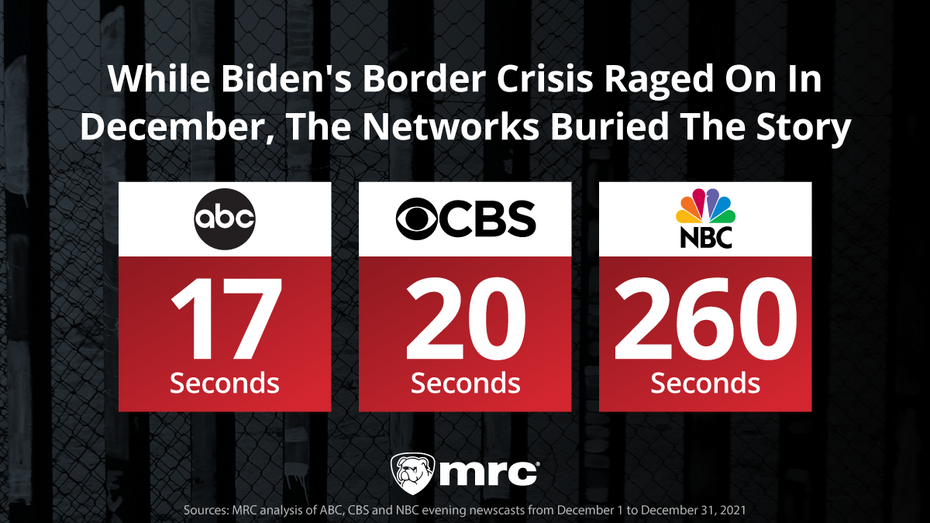 And keep in mind, many of the months the networks abandoned the border were periods of new records. July’s spike to 212,672 apprehensions is quite the contrast to four minutes of coverage.

Here’s the last six months of border crisis coverage (on the ABC, CBS and NBC evening newscasts). Note the spikes in September and October, but otherwise the networks buried the ongoing disaster:

During the 2020 presidential campaign, a compliant media sold Joe Biden as a “moderate.” Yet, in 2021, he nominated a slew of radical nominees to all sorts of positions. As shocking positions of these individuals leaked out, how did the three nightly newscasts react? They didn’t. They simply censored the revelations.

Health and Human Services Secretary Xavier Becerra is as radical as they come. As noted in August by The Federalist’s Kylee Zempel, he “refused to call for free and fair elections in Cuba after meeting with dictator Fidel Castro,” supports open borders, gun control, he sued the nuns of the Little Sisters of the Poor while he was Attorney General in California.

Becerra is a radical on abortion, supporting partial birth abortion. He prosecuted pro-life activist David Daleiden. Yet, the networks suppressed any hint of controversy on his nomination. On the March 18, 2021 World News Tonight, anchor David Muir offered this: “The Senate today confirming Xavier Becerra as secretary of Health and Human Services by a vote of 50-49.”  That’s it.

In November, Saule Omarova faced hearings in her bid to become Comptroller of the Currency, a branch of the Treasury Department. According to USA.gov, “The Office of the Comptroller of the Currency charters, regulates, and supervises all national banks. It also supervises the federal branches and agencies of foreign banks.” It’s not some obscure, unimportant position.

Yet, the fact that Omarova said of some oil and gas companies “We want them to go bankrupt,” the fact that she complimented the Soviet Union on Twitter, a regime that murdered millions, resulted in no coverage on the networks. Omarova ultimately withdrew her nomination.

Does the name Tracy Stone-Manning ring a bell? Probably not because the networks don’t talk about the extremist director of the Bureau of Land Management. She was nominated in April and confirmed in July, but the evening newscasts hid her radicalism. In an op-ed for the Arizona Republic, Congresswoman Debbie Lesko and former lawmaker Steve Pierce wrote of her support for population control, her connections to the radical Earth First organization, as well as accusations that she was involved in a form of eco-terrorism called tree spiking.

Lesko and Pierce concluded, “The U.S. Senate has an opportunity to ensure an extremist like Tracy Stone-Manning is not at the helm of an agency as important as the Bureau of Land Management..”

Abandoning Afghanistan as soon as the Networks Could

Joe Biden’s withdrawal from Afghanistan in August of 2021 spiraled into a disaster for the country, the world and for the President politically. From the Taliban seizing control of city after to city, to a suicide bombing that killed 13 member of the military, to Americans stuck in the unstable country, the month saw one disaster after another. The network evening newscasts actually covered the nightmare. But what happened after August?

MRC analysts examined every single evening newscast from the pivotal time period of August 1, 2021 to August 31 2021. In order to see how quickly the story disappeared, they then looked at the same broadcasts from October 1, 2021 to October 31 2021. The contrast between the two periods, separated by only a month, is stark. In August, the networks covered every angle of the botched withdrawal, amounting to 409 minutes and 12 seconds. In October, that number plummeted to just 16 minutes and 22 seconds. 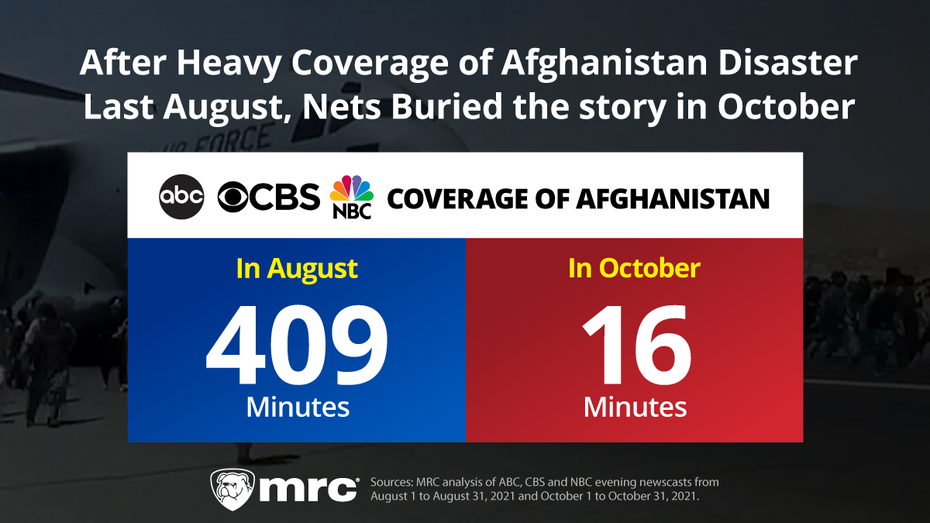 It’s not as though October lacked for newsworthy disasters in Afghanistan. Here are just a few examples: By the end of that month, there were still hundreds of Americans stuck in the country. October saw young girls fighting to go to school under the Taliban’s rule. It was revealed that the U.S. would pay families for the deaths of loved ones after a botched drone strike (in response to the murder of U.S. service members) actually killed civilians and children instead.

A new warning about the terrorist threat from Afghanistan. A senior Pentagon official says ISIS-K could regain the ability to attack the U.S. in just six months with U.S. troops now gone from Afghanistan.

October is representative of the overall disinterest the networks now show to Afghanistan. As of January 11, 2022, there are still 80 Americans trapped in Afghanistan, according to CNN. Do the journalists at the big three networks care about their fellow citizens?

A New Years' resolution for ABC, CBS and NBC would be to cover Afghanistan and all other Biden disasters and controversies.