30 Years Ago, the Soviet Union Collapsed and the Press Praised Gorbachev 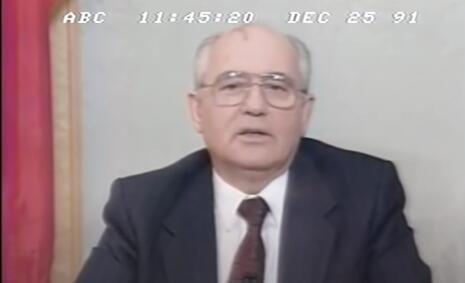 But did journalists at the time accept reality? It sure didn’t seem like it. The night before, on the NBC Nightly News, Moscow reporter Bob Abernethy put the communist Gorbachev above Ronald Reagan, above Margaret Thatcher, above Winston Churchill:

Well let me say how I hope history will judge him. Perhaps in time with help and work, people here will improve their everyday lives and remember Gorbachev's accomplishments and that would seem to me fair. I remember not only the end but the beginning of the Cold War and the forty years of fear Gorbachev more than anyone else ended. He seems to me to have done more good in the world than any other national leader of my lifetime.

Rather than honor the man who worked to end the Soviet Union, journalists spun the Communist leader as the hero. In his December 27, 1991 Boston Globe column, Senior Associate Editor H.D.S. Greenway hyped:

The Nobel Prize he received for ending the Cold War was well deserved. Every man, woman and child in this country should be eternally grateful. His statue should stand in the center of every east European capital....No Russian has done more to free his people from bondage since Alexander II who freed the serfs.

But no worries. The journalists were already looking ahead to a post-Communism world and complaining about it:

Bernard Shaw: "CNN's Eileen O'Connor looks at how the Soviets' dreams of prosperity can conflict with the reality of developing a market economy within an unstable political system."
Reporter Eileen O'Connor: "... Mikhail dreams of being rich. He knows he will have to work hard. But it's scary when there's no more Big Brother."
-- CNN World News, December 10, 1991.

"In neighboring Albania, the collapse of communism has left people hungry, cold and hopeless. A children's hospital in Tirana is overflowing with patients and critically short of food and medicine."
-- Dan Rather after story on Bulgaria, December 19, 1991 Evening News.

Millions died under communism, but network journalists wanted to praise Gorbachev for accepting reality. No matter, despite the corruption of the mainstream media, this special Christmas, the death of the Soviet Union,  present still stands as a gift to humanity.