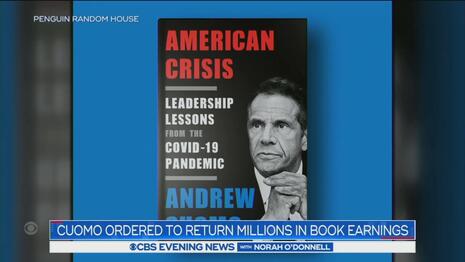 Maybe ABC should be renamed CPN: The Cuomo Protection Network. The journalists at ABC are going out of their way to hide each new Cuomo scandal, whether it’s Andrew or former network host Chris. On Tuesday, it was announced that New York is ordering the ex-New York Governor to return the $5 million he received for his bragging book about handling Covid.

CBS and NBC offered scant coverage. The CBS Evening News on Tuesday allowed just 28 seconds and NBC’s Today on Wednesday 27 seconds. But at least those networks bothered to cover it. ABC has avoided it entirely so far. Here’s Norah O’Donnell on CBS:

Former New York Governor Andrew Cuomo is being ordered by a state ethics panel to turn over more than $5 million he received for his book on the pandemic. The ethics panel approved the book deal last year after Cuomo promised to write it on his own time and not use state resources or workers. But an investigation last month found his staff members worked numerous hours on the book during office hours. Cuomo`s lawyer says he won`t give up the money without a fight.

New York's Ethics Commission is ordered former Governor Andrew Cuomo to give up more than $5 million that he was paid for his book about the coronavirus pandemic. Last month, the state board rescinded its previous approval for Cuomo to write the book. It determined that he had violated an agreement not to use any state personnel or resources in writing it. Cuomo's attorney calls the Commission's actions unconstitutional and is promising a fight.

ABC’s World News Tonight and Good Morning America since Tuesday have skipped the story. But that’s not shocking. On November 30, when it was revealed that Chris Cuomo, a former GMA co-host, was secretly working to undermine sexual abuse accusers of his brother Andrew, ABC skipped mention of Chris.

On December 6, two days after Chris Cuomo was fired from CNN for (among several reasons) accusations that he sexually harassed a woman while at ABC, ABC reported on this as allegedly happening at “another network.”

No, it was your network, ABC. CNN may be ashamed about its association with Chris Cuomo, but ABC really is the protection outlet for the Cuomo brothers.

The protection effort on ABC was sponsored by Honda. Click on the link to let them know what you think.