EMBARRASSED: Why Has GMA Gone 665 Days Since Covering Jussie Smollett? 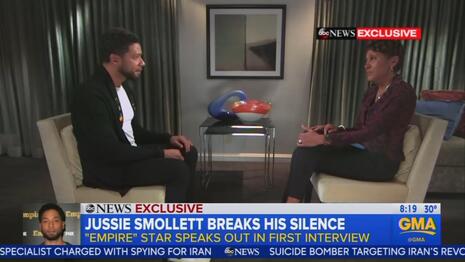 The Jussie Smollett hoax trial went to the jury on Wednesday afternoon, but you wouldn’t know it on Good Morning America. Since the start of the trial, the ABC show has offered ZERO coverage of the claims that the actor lied about a MAGA mob assaulting him.

It seems as though GMA’s reporters and hosts are embarrassed of their 2019 credulous, fawning interview with Smollett.

Here’s a larger question: When was the last time Good Morning America covered or mentioned Smollett’s crumbling claims at all? According to a Nexis and Snapstream search, it was February 12, 2020. That’s 665 days ago.

As I noted in my NewsBusters study on Monday, the reason is likely shame. On February 14, 2019, Good Morning America's Robin Roberts devoted a whopping 17 minutes and 52 seconds to her “exclusive” interview of the actor recounting his claims. Roberts practically acted as a PR agent, hailing the Empire star who claimed MAGA-loving maniacs recognized him on the streets of Chicago in the middle of the night and happened to have a noose.

Talking to her co-hosts back in 2019, Roberts bragged about the GMA exclusive: “[This interview] is the first time he's given a detailed account, an account that Chicago police have said that been consistent. He hasn't changed his story and also said it's credible.”

Here’s the current total of how the network morning and evening news shows have covered the hoax trial. ABC, unsurprisingly, offered the least amount of air time, just two minutes and 15 seconds since November 29, 2021. All of that has come from World News Tonight.

CBS got off to a slow start. Until the morning of December 6, CBS Mornings and the CBS Evening News had no coverage. As of Thursday morning, CBS is now up to a healthier eight minutes and 25 seconds. The journalists at the Today show and NBC Nightly News deserve credit for consistently covering the trial. Their total is eight minutes and 37 seconds.

If you want to see coverage from Good Morning America, you have to go all the way back to February 12, 2020. Here’s all 49 seconds.

MICHAEL STRAHAN: George, we're gonna go now to that new twist in the Jussie Smollett scandal. A special prosecutor is now indicting the actor, who is accused of making up the story of his racially motivated attack. Alex Perez joins us now from Chicago with more. Good morning to you, Alex.

ALEX PEREZ: Hey, good morning, Michael. Almost a year since similar charges against Jussie Smollett were abruptly dismissed. The special prosecutor now handling the case says those charges should have never been dropped. Now a grand jury on Tuesday indicted Smollett on six counts of disorderly conduct. Those charges related to allegations the actor allegedly staged a racist and homophobic attack against himself. Now, his attorneys argue this is about politics, not justice. He's due back in court on these new charges February 24th. George?

The trial is now with the jury. Will the Good Morning America co-hosts bother to cover the results? Or are they too embarrassed at how eagerly they jumped at flimsy claims about a MAGA mob?

I reached out to the Good Morning America co-hosts, as well as several producers, about the lack of coverage. I have yet to hear back.

ABC’s continued attempt to bury their credulous initial coverage of Smollett was sponsored by Macy’s. Clock on the link to let them know what you think.