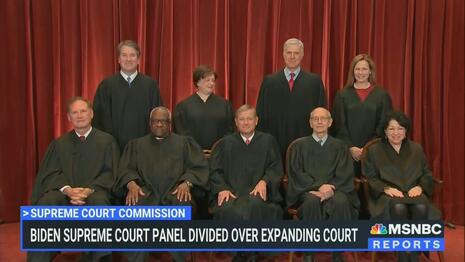 The networks this spring were excited at the prospect of Joe Biden implementing a radical packing of the Supreme Court. But now that the President’s commission on the Court has come back with a muddled, non-answer, ABC, CBS and NBC on Thursday night and Friday morning were silent over the embarrassment.

Reuters explained the findings: “A White House commission studying potential changes to the U.S. Supreme Court said expanding the number of justices would pose ‘considerable’ risks and might further politicize the court, according to preliminary draft documents released on Thursday.”

The commission suggested term limits, but, as Reuters noted, “it might not be possible to make such a change without amending the U.S. Constitution.”

Instead of covering yet another defeat for the progressive Biden agenda, the networks on Thursday and Friday were silent for a combined seven and a half hours of evening and morning newscasts.

On MSNBC, Friday, Justice Correspondent Pete Williams showed how irrelevant the whole commission was after Biden punted the decision to them:

JOSE DIAZ-BALART: Pete, what weight does this commission have?

PETE WILLIAMS: Well, in a sense, none at all. These are not formal recommendations and even if they are, it's going to be up to the President to decide what to do with them. This is his commission. These are recommendations to him. And of course, Congress would probably have to be involved in this no matter what.

This is quite a contrast to the spring when ABC and NBC justified expanding the number of justices, citing Democratic “fury” over the new “conservative” Supreme Court. On April 15, 2021, Today’s Kasie Hunt rationalized, “The push from progressives to do it now is an effort to dilute a conservative majority that could shape the law for generations.”

She added, “Progressive fury over the Court has been growing after former President Trump appointed three conservative justices.” On the same day’s Good Morning America, Rachel Scott declared, “Progressive Democrats say this is absolutely necessary to restore the balance of the Supreme Court.”

Yet later in the spring, when a Politico poll found that court packing is massively unpopular, the networks collectively yawned. Indeed, last fall, the same networks hid Biden’s refusal to say whether he supported expanding the Court.

The President seems to have suffered another setback for his agenda and ABC, CBS and NBC are trying to pretend it’s not yet more failure.

JOSE DIAZ-BALART: At this hour, president Biden's commission on the U.S. Supreme Court is kicking off a virtual day-long meeting. It comes one day after the president and the panel released his initial findings on various arguments around reforming a nation's highest court, such as expanding it. But it did not make any recommendations. The president created the commission in April, in response to pressure from liberals, who have called for adding justices after the conformation of Justice Amy Coney Barrett just before the 2020 election. With me now is NBC justice correspondent — Justice Correspondent Pete Williams and Melissa Murry, a professor of law for New York University who clerked for Supreme Court Justice Sonia Sotomayor when she was a federal judge. And she is also an MSNBC legal analyst. Pete, run me through some of the panel’s findings when it comes to reforming the U.S. Supreme Court?

PETER WILLIAMS: Well, the commission is divided on whether expanding the size of the court would be wise. Many say they think it would undermine the Court's legitimacy and would be seen as a partisan maneuver. That’s basically the same criticism that Stephen Breyer had for this idea. But they're more supportive of the idea of 18-year term limits. They say that nearly all the states either have term limits or mandatory retirement ages for their judges on their state's highest courts. And they say that the U.S. Is the world's only major democracy that doesn't have either one of them. Under the system that the court —  that the commission discusses, every President's term in office would produce two supreme court nominations, making the court more responsive to the people, the report says, and reducing the tendencies of presidents that every younger nominees who can stay on the court for 30 years or more.

One note, they say, the average time on the court for justices has been about 26 years since 1970, but before that, it was about 15 years. The commissioners say this current system gives political parties an ability to shape the direction of the Court that's out of proportion to their record of success at the ballot box. The commissioners say that Congress be able to make this change by itself, but the safest course of action would be a constitutional amendment, and they say it could be designed so that the system would kick in during the term of a future president, so that the vote on the amendment wouldn't depend on who the president was at time. Jose, this idea of term limits for Supreme Court justices has long been a favorite of academics, so this report is by far the most serious airing of the idea yet.

DIAZ-BALART: Pete, what weight does this commission have?

WILLIAMS: Well, in a sense, none at all. These are not formal recommendations and even if they are, it's going to be up to the President to decide what to do with them. This is his commission. These are recommendations to him. And of course, Congress would probably have to be involved in this no matter what. Because even if you have a constitutional amendment, the most likely course of action, the way it's always been done, would be to have Congress propose a constitutional amendment to the states. Now, you can have an amendment by constitutional convention, but that's really very tricky. So one way or another, it would require some congressional support to make this change.