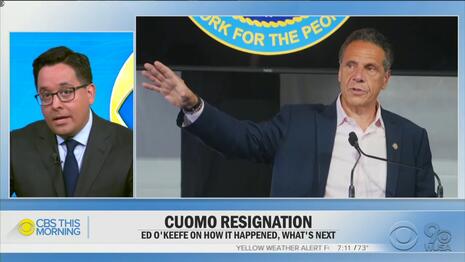 Aside from the sexual abuse allegations, “many” think Andrew Cuomo handled issues like Covid “masterfully.” That was the totally out-of-touch claim from CBS This Morning journalist Ed O’Keefe on Wednesday as he tried to spin the legacy of the disgraced governor. O’Keefe, of course, made no mention of the Democrat’s disastrous decision to kill thousands by placing Covid-positive patients into nursing homes.

After guest co-host Dana Jacobson wondered how “people will remember” Cuomo’s three terms in office, the tone deaf O’Keefe insisted, “There were a lot of things. Obviously the pandemic. You talk to people in Albany or across the state they say he did a masterful job keeping the state safe and dealing with the situation and serving as a tonic to many people compared to the federal response. Especially in those early weeks and months.”

Sending COVID-positive patients into nursing homes for 46 days helped kill thousands of elderly, including my husband’s parents. But if you watched the news last spring, you probably would never have known.

He was riding high on his popularity: winning an Emmy award, creating and selling creepy posters of a conquered “COVID mountain” and signing a $5.1 million book deal. All the while, he covered up how his decisions led to seniors dying — by the thousands.

I can’t lie: I’m angry that the deaths of over 15,000 seniors didn’t bring headlines or get the scorn that it should have from our elected officials. To them, our greatest generation doesn’t seem to matter.

O’Keefe mentioned a few other things to consider — other than killing thousands of seniors and sexually abusing women, that is.

They are rebuilding LaGuardia Airport. They are rebuilding other parts of the state as well.  He tried to buck up the economy. But you take his behavior in this situation, plus a host of scandals the last few years and they said it was time told him accountable.

The Cuomo propaganda was sponsored by Ensure and Walgreens. Click on the link to let them know what you think.

VLAD DUTHIERS: President Biden was one of many Democrats who said Cuomo should resign and was about that yesterday.

ED O’KEEFE: How would you assess his ten and a half years as governor of the state?

JOE BIDEN: In terms of his personal behavior or what he's done as a governor?

O’KEEFE: What he's done as a governor.

DUTHIERS: CBS News Senior White House and political correspondent Ed O'keefe asked that question and joins us now. Ed, good morning. Good to see you. Governor Cuomo continued to deny wrongdoing even as he announced his resignation. So why step down now?

O’KEEFE: While he continues to have this legal fight ahead of him, Vlad, this political fight was unwinnable for him. We learned in the last 48 hours that while a majority of the assembly was ready to move with impeachment, virtually all the New York state Senate, Democrats and Republicans was likely going to vote for his removal. Whether it was a few weeks or months or if the vote had been taken this week. He knew that and as he said in his statement as he announced his resignation that it was something that would just be dragged out too long and turn out to be too expensive for the state. But also by removing himself now from the political fray, he may be thinking that it reserves his ability to get back into it one day if he's somehow able to get out from under this legal fight.

DUTHIERS: You and I talked about this yesterday on CBSN, our 24 hour digital network. What happens next? He's got two weeks before he effectively leaves office.

O’KEEFE: He's got to transition now between when he leaves. And he has to prepare for a legal fight. If anything, he's going to face civil suits and there are a handful of district attorneys in the state who are reviewing the Attorney General's work. And trying to sort out whether or not there is going to be a criminal case. So, you know, watch what he does in the next two weeks in terms of getting ready for his successor. Does he do anything to help her? And I know a lot of people in Albany will be watching to see whether he's got some other plan either to help himself or do something in this two week period.

DUTHIERS: He will be replaced by Lieutenant Governor Kathy Hochul. It is history in the making. She becomes the first woman, first female governor of the state of New York. What do we know?

O’KEEFE: Not only the first woman, but for someone who is an upstate Hew York native, I can tell you people all across the state intrigued by the fact she'll be the first governor not from New York City in about a hundred years. She's from Buffalo, Eerie County. And someone who has traveled the state and keeps an aggressive travel schedule. All 62 counties every year. Knows a lot of the Democratic Party insiders players, but has never been in a position to really run something this large and this important in the state. She's going to need a lot of help from legislators who are ready to support her. And we're told that President Biden will probably speak with her in the coming days to try to offer his support. But certainly history in the making and she's gonna have to think immediately about next year when she, if she wants to could be on the ballot to seek a full term.

DANA JACOBSON: Ed, quickly before we let you go, when we look at the Governor’s legacy — and it is tied to this — it’s also the things that he did. How will people  remember his time in office?

O’KEEFE: There were a lot of things. Obviously the pandemic. You talk to people in Albany or across the state they say he did a masterful job keeping the state safe and dealing with the situation and serving as a tonic to many people compared to the federal response. Especially in those early weeks and months and they credit him with, you know, a lot of major infrastructure projects across the state. They are rebuilding LaGuardia Airport. They are rebuilding other parts of the state as well.  He tried to buck up the economy. But you take his behavior in this situation, plus a host of scandals the last few years and they said it was time to hold him accountable.