In March of this year, Joe Biden firmly stated that, if the New York Attorney General confirms the numerous sexual harassment charges against Andrew Cuomo, the Governor should resign. The President added that Cuomo deserved to be “prosecuted too.” Good Morning America co-hosts praised Biden for his “tough,” “direct” words. Now that the AG finding says that Cuomo harassed multiple women, will ABC hold the President to his words?

Here’s the March 17 GMA exchange between Stephanopoulos and Biden:

JOE BIDEN: Yes, I think he probably will end up being prosecuted too.

STEPHANOPOULOS: But do you -- how about right now, you said you want the investigation to continue. You saw Chuck Schumer, Senator Schumer, Senator Gillibrand, the majority of the delegation don't think he can be an effective governor right now. Can he serve effectively? 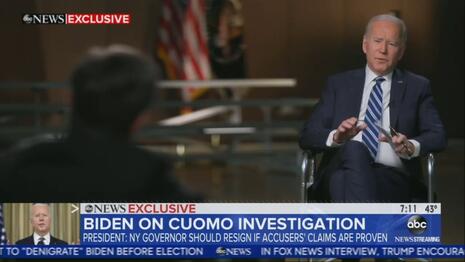 BIDEN: That is a judgment for them to make in the state whether or not he can be effective. Here’s my position and it's been my position since I wrote the Violence Against Women Act: a woman should be presumed to telling the truth and should not be scapegoated and become victimized by her coming forward. Number one. But there should be an investigation to determine whether what she says is true. That's what's going on now.

STEPHANOPOULOS: And you’re being very clear if they prove the claims he's gone?

BIDEN: That's what I think happens and by the way there could be a criminal prosecution that is attached to it. Let the investigation -- I'm not -- I don't know what it is but I started with the presumption, it takes a lot of courage for a woman to come forward so the presumption is it should be taken seriously and investigated and that's what's under way now.

After the interview, Stephanopoulos marveled, “Toughest words there yet for Governor Cuomo right there.” Robin Roberts touted, “He was very direct.”

So, ABC, CBS, NBC, MSNBC, CNN, you going to hold Biden to his words? While they are at it, they might want to point out the hypocrisy of Biden speaking out against sexual misconduct, given what accuser Tara Reade has said about him.