Happy Birthday to Hate! MSNBC Turns 25, Here’s 5 of the Net’s Most Vile Outbursts 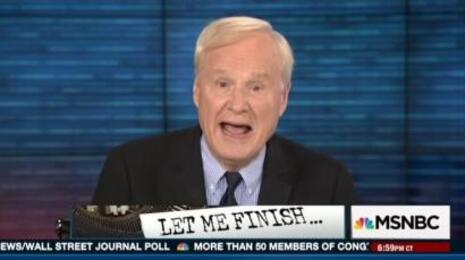 MSNBC’s Ayman Mohyeldin, who now has a daytime talk show on the network, shocked even the liberal hosts of Morning Joe on January 29, 2015 when he slimed Chris Kyle, the real American Sniper, as a “racist” who went on “killing sprees.”

AYMAN MOHYELDIN: A lot of his stories when he was back home in Texas, a lot of his own personal opinions about what he was doing in Iraq, how he viewed Iraqis. Some of what people have described as his racist tendencies towards Iraqis and Muslims when he was going on some of these, you know, killing sprees in Iraq on assignment. So I think there are issues --

MOHYELDIN: When he was involved in his -- on assignments in terms of what he was doing. A lot of the description that has come out from his book and some of the terminology that he has used, people have described as racist.

After 23 years at the network, Chris Matthews left MSNBC in 2020. During all that time, he fulminated and smeared conservatives regularly. So we are declaring a tie on Hardball hate. One from 2009 in which he fumed that “someone’s going to jam a C02 pellet into Rush [Limbaugh’s] head.” The other is when he declared Newt Gingrich a satanic “car bomber.”

“You guys see Live and Let Die, the great Bond film with Yaphet Kotto as the bad guy, Mr. Big?  In the end they jam a big CO2 pellet in his face and he blew up.  I have to tell you, Rush Limbaugh is looking more and more like Mr. Big, and at some point somebody’s going to jam a CO2 pellet into his head and he’s going to explode like a giant blimp.  That day may come. Not yet. But we’ll be there to watch. I think he's Mr. Big, I think Yaphet Kotto. Are you watching, Rush?”
— Hardball Host Chris Matthews on MSNBC live coverage on October 13, 2009.

In 2011, Keith Olbermann left MSNBC. But for years, they indulged, celebrated and tried to be embarrassed by his deranged, unhinged hate. In the October 2007 edition of Playboy, the MSNBC host declared Fox News worse — yes worse — than al Qaeda.

Al Qaeda really hurt us, but not as much as Rupert Murdoch has hurt us, particularly in the case of Fox News. Fox News is worse than Al Qaeda - worse for our society. It's as dangerous as the Ku Klux Klan ever was.

Host Chris Hayes “honored” Memorial Day weekend in 2012 by admitting that he is “uncomfortable” with calling fallen soldiers “heroes.” Here he is on May 27, 2012:

Finally, the winner by sheer grossness, Martin Bashir on November 15, 2013, suggested that someone should “s-h-i-t” in Sarah Palin’s mouth. (Yes, he spelled it out, as if that made it any less disgusting.) Citing Palin’s political comparison to slavery, he offered this disgusting take.

One of the most comprehensive first-person accounts of slavery comes from the personal diary of a man called Thomas Thistlewood, who kept copious notes for 39 years. Thistlewood was the son of a tenant farmer who arrived on the island of Jamaica in April 1750, and assumed the position of overseer at a major plantation. What is most shocking about Thistlewood's diary is not simply the fact that he assumes the right to own and possess other human beings, but is the sheer cruelty and brutality of his regime.

In 1756, he records that “A slave named Darby catched eating canes; had him well flogged and pickled, then made Hector, another slave, s-h-i-t in his mouth.” This became known as Darby’s dose, a punishment invented by Thistlewood that spoke only of the slave owners savagery and inhumanity.

And he mentions a similar incident again in 1756, this time in relation to a man he refers to as Punch. “Flogged Punch well, and then washed and rubbed salt pickle, lime juice and bird pepper; made Negro Joe piss in his eyes and mouth.” I could go on, but you get the point.

When Mrs. Palin invoked slavery, she doesn’t just prove her rank ignorance. She confirms that if anyone truly qualified for a dose of discipline from Thomas Thistlewood, then she would be the outstanding candidate.

Twenty five years later, MSNBC is the home of left-wing hate. One can only imagine what the future will bring for the liberal cable network.