FLASHBACK: The American Media's DOOM Predictions on Brexit (They Were Wrong) 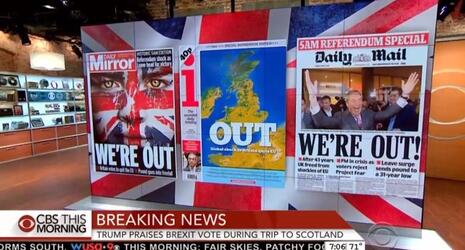 Five years ago on Wednesday, the British people shocked the liberal media and the political establishment by voting to leave the European Union. It wasn’t just outlets like the BBC in Britain that promoted panic over the decision of June 23, 2016. American networks freaked out and predicted doom. Looking back, they got a lot wrong.

On the June 27, 2016 Today show,  analyst Jim Cramer assailed, “It was a major misjudgment economically.... In terms of the financial chaos and collapse, it’s just one of the worst moves I’ve seen.” (Doesn't Cramer ever get tired of being wrong?) He mocked the British voters as “completely unprepared” for the decision they made.

On that day’s Good Morning America, Terry Moran reported live from London and chided, “People are in shock here. It's all anyone can talk about and they're worried about what happens next to their jobs, to their house prices, to their savings.”

On the June 27, 2016 CBS This Morning, the not-yet disgraced Charlie Rose hyperventilated, “British leaders are trying to quiet growing fears of economic disaster after the vote to leave the European Union.” Reporter Charlie D’Agata snidely mocked, “Last week the word was Brexit. Today is Bregret with Brits wondering if anything can be done to overturn the decision."

The insults, paranoia and fear from the American media continued for years. On October 29, 2019, journalist Tina Brown appeared on CBS This Morning and sneered, “I think that Brexit England is an ugly place, actually. There's a lot of anger. A lot of misogyny. A lot of sort of people in a kind of [a]... hatred of foreigners.”

So, five years on, how did the sky-is-falling doom predictions fare? Not well. The British Spectator on Wednesday broke down some of the worries promoted by the media:

The focus of the Remain campaign on Brexit's economic costs was labelled as 'Project Fear' by opponents, with no politician doing more to push that line of argument than Chancellor George Osborne. At one event, the former Tory MP unveiled a poster declaring that households would be poorer by £4,300 in 2030 – a claim that earned a rebuke from the BBC's fact check: 'the precise figure is questionable and probably not particularly helpful.' Regardless of the dubious way in which the Treasury concocted this oddly specific figure, records from the Office for National Statistics (ONS) show in the five years since that real disposable income per head has risen from £5,177 in the second quarter of 2016 to £5,354 at the end of 2020.

Half a million job losses

Under Osborne, the Treasury produced multiple doomsday scenarios about the consequences for the labour market if Britain left the EU. One suggested that 'unemployment would increase by around 500,000 with all regions experiencing a rise in rise in the number of people out of work' with specific job losses by region with London and the South East set for 73,000 and 74,000 redundancies specifically. Five years on and a million jobs were added by the time Covid hit, with the employment rate for those aged between 16 to 64 rising from 74.5 per cent in June 2016 to 76.6 per cent in January 2020 – the highest level since 1971. In March 2016, the month before the Treasury released its analysis, the total number of jobs in the UK was 34.4 million – the same as it is now, having fallen in the pandemic from its high of 35.7 million.

(To read all the botched predictions, go here.) So, next time you hear journalists, in America or in Europe predicting doom if voters do something they don’t like, you should be skeptical.