CBS Doesn’t CARE About Lies of 1619 Project, Skips Distortions as Question of ‘Focus’ 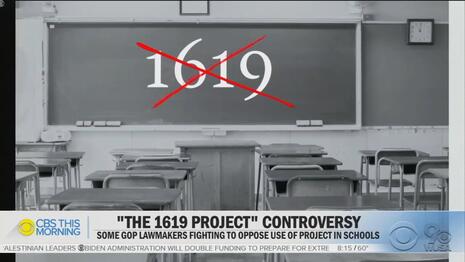 The journalists at CBS This Morning devoted almost seven minutes to the 1619 Project on Tuesday and avoided an honest discussion of the massive historical distortions at the heart of The New York Times journalism. Highlighting the efforts to keep schools from teaching the error-filled document, reporter Ed O’Keefe was vague on just why many elected Republicans oppose it.

He noted, “Materials for the project have been developed into lesson plans to use in schools but some Republican leaders are trying to block it in public education.”

O’Keefe played a clip of South Dakota Governor Kristi Noem calling for the “real history” of America to be taught. But the CBS journalist offered few specifics on what that might mean. Instead, he spun, “In response to criticism about the project's focus, the Times issued a clarification last year to its opening essay by Nikole Hannah-Jones, noting that protecting slavery was a reason that some of the colonists fought the American Revolution, but not all of them.”

Clarification? Criticism of the project’s “focus?” No, that’s not the problem.

The problem with The 1619 Project is a problem with facts. Distinguished historians, including Pulitzer Prize-winners, hammered the errors. In a 2019 letter to The New York Times, Victoria Bynum, James M. McPherson, James Oakes, Sean Wilentz, and Gordon S. Wood wrote:

We are dismayed at some of the factual errors in the project and the closed process behind it.

These errors, which concern major events, cannot be described as interpretation or “framing.” They are matters of verifiable fact, which are the foundation of both honest scholarship and honest journalism.

Writing in Politico in March of 2020, Leslie M. Harris, professor of history at Northwestern, said the Times KNEW of the historical errors at the time, but disregarded objections from historians:

Despite my advice, the Times published the incorrect statement about the American Revolution anyway, in Hannah-Jones’ introductory essay. In addition, the paper’s characterizations of slavery in early America reflected laws and practices more common in the antebellum era than in Colonial times, and did not accurately illustrate the varied experiences of the first generation of enslaved people that arrived in Virginia in 1619.

Instead of discussing any of this, CBS This Morning brought on Ta-Nehisi Coates and pretended that there was no reason one would object to the 1619 Project. Co-host Anthony Mason offered this clueless question: “Ta-Nehisi, what do you believe the critics of The 1619 Project are worried about?”

Swimsuit model/This Morning guest host Ashley Graham echoed, “I just want to know, what do you think Americans will take away from this controversy?”

Yes, why could anyone possibly oppose the 1619 Project? With no real discussion of the gross historical distortions, one is left with the lingering assumption it must be... racism.

The historical distortions were sponsored by Progressive insurance and Nature's Made. Click on the links to let them know what you think.

ASHLEY GRAHAM: Students, faculty and alumni at the University of North Carolina at Chapel Hill are speaking out in defense of The New York Times Magazine journalist Nikole Hannah-Jones. UNC journalist school announced that Hannah-Jones who won the Pulitzer prize for her work on the 1619 Project for The New York Times magazine will join the faculty in July but the university board of trustees had not approved her application for tenure. Previous professors in the same role were offered tenure when they accepted the position. Ed O'Keefe has more on the controversy and The 1619 Project.

NIKOLE HANNAH-JONES: I'm saying that history is history. And we have to tell the truth.

ED O’KEEFE: Journalist Nikole Hannah-Jones appeared on CBS This Morning back in August 2019, as The New York Times magazine launched The 1619 Project an ongoing series the magazine says aims to re-frame the country's history by placing the consequences of slavery and the contributions of black Americans at the very center of our national narrative. The project marked the 400th anniversary of slavery in America.

HANNAH-JONES: We don't know about 1619 the same way we don't learn very much about slavery. It's shameful. No one wants to talk about their sins or their worst moments.

O’KEEFE: Materials for the project have been developed into lesson plans to use in schools but some Republican leaders are trying to block it in public education.

DONALD TRUMP: This project rewrites American history to teach our children that we were founded on the principle of oppression, not freedom.

O’KEEFE: GOP lawmakers in five states have introduced bills to cut funding to schools and universities that use the project.

GOVERNOR KRISTI NOEM: We just want our kids to have the real history of America, to be proud of America in our beginning and make sure they have the best.

O’KEEFE: In response to criticism about the project's focus, the Times issued a clarification last year to its opening essay by Hannah-Jones, noting that protecting slavery was a reason that some of the colonists pout the American Revolution, but not all of them. Hannah-Jones stands by it and how it's shaping origins and continues to affect black Americans today. For CBS this morning, Ed O'Keefe, Washington.

GRAHAM: Hannah-Jones has accepted a contract with the school. We reached out to her and have not heard. The chairman of the UNC board of trustees told CBS News that the board has taken no action and made no decision concerning her decision or tenure.

GAYLE KING: First on CBS This Morning, best-selling author, that’s Ta-Nehisi Coates, joins us to discuss the larger debate about the project and how we teach U.S. history in this country. Good morning, it's always good to have you here. I know you know Nikole Hannah-Jones very well, and I know you've been talking to her and you don't want to betray any confidential conversations you've had. But I'm curious about your reaction to the controversy.

TA-NEHISI COATES: Good morning, Gayle, sorry I can't be in the studio with you guys.

COATS: You know, my reaction is, while on the one hand, this is clearly about Nikole who is, to my mind, among if not the most decorated journalist in our profession. And how she was treated down at UNC. Bt there is a much bigger debate that's going on here. And it is about what ideas our children -- what ideas students at colleges will be exposed to or not. The 1619 Project has its detractors. It has its proponents. There's been a vigorous debate around it, as it should be. That's what we want in education, that's what we want in a free society. When I see state legislatures, United States senators, when I see the President of the United States directing critique at it via an executive order, when we saw laws being passed, actual policy to ban The 1619 Project critical race theory and other ideas deemed detrimental, you know, I think we have a problem on a different scale. We've moved beyond the realm of critique into the realm of actual policy and I think that's a problem.

KING: Let's talk about the Critical Race Theory and what it means and the calls to ban it?

COATS: Yeah, so the critical race theory is a framework for understanding American history and American life. And the basic premise of it starts from the idea that racism is endemic to this society. Now, you can agree with that or disagree with that. There are all sorts of historical theories that can be applied to a law, et cetera. But to ban it, I really want to focus on that, it's not what your opinion is, the idea it should be banned from teaching all. Or banned from discussion or education or pushed out of the public square, I think that's a huge problem. I think whatever of your opinion of those ideas are, you should find that problematic. There are many notions and ideas in America that I totally and completely disagree with. I wouldn't ban them. There are a lot of people that I think are dead, dead wrong. You know, I wouldn't move for schools and universities to ban a discussion of those ideas. I just think that's a totally, totally different level.

ANTHONY MASON: Ta-Nehisi, what do you believe the critics of The 1619 Project are worried about?

COATS: Well, you know, I don't want to speak for the critics. I don't want to get into a path where, you know, I'm saying it's wrong to criticize. I think the critics have and can speak for themselves. I think the people who are attempting to pass policy to banish it out of the public square are simply afraid of a fair and just accounting of American history. We're at a moment right now where people are pulling down statues and monuments, et cetera. We're having a much, much broader reconsideration of what the history of this country is. You know, there's hard questions to be asked. Why is it that in the state of Tennessee there are more statues of Nathan Bedford Forrest, one of the founders of the Ku Klux Klan than all three presidents born in Tennessee put together. How can that be true? What’s going on? I think we're having a broader conversation right now that scares a lot of people.

GRAHAM: Thanks for joining us, Ashley here. I just want to know, what do you think Americans will take away from this controversy?

KING: That was former President Trump you were speaking of. But I want to go back to Nikole Hannah-Jones at the time UNC called her one of the voices leading in journalism at the top
of her field. Her supporters say her credentials are impeccable, her work ethic. So how does she go from that to now we are not sure about tenure, which, by the way, UNC is saying, “We have not denied tenure. That is not what’s happening here.”

COATES: Well, you know, no decision is effectively a denial. Nikole went through the many, many steps this was brought before the board of trustees and they just declined to vote on it. I don't know how that's any better. I do want to say, this morning, we have a letter we're delivering to UNC, and the signers give broad support. We have everybody from Chris Paul to Cornell West to Amy Sherald. There is a broad, broad concern here that something has gone deeply wrong.

MASON: Ta-Nehisi, if this is the letter that has gone live on The Root, it looks like hundreds of signatures.

COATES: It does. Yes.

MASON: The line that strikes me is few single works have been threatened with more restrictions than The 1619 Project.