Will Media Notice That Court Packing Scheme Is MASSIVELY Unpopular With Americans? 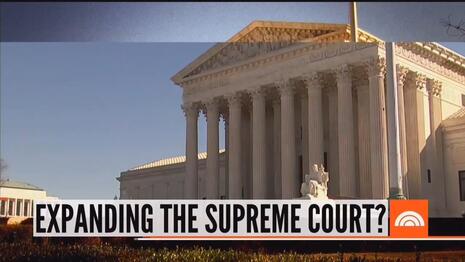 Packing the Supreme Court with several new liberals is massively unpopular with the American public, according to a respected polling firm on Wednesday. Will the networks who routinely parrot the talking points of Joe Biden, even bother to inform their viewers?

Easley explained that, despite the media cheerleading, Americans are not coming around to the radical plan:

In the April 16-19 survey, voters were 20 percentage points more likely, at 46 percent, to say Congress should only allow nine justices to serve on the high court than they were to be in favor of passing a law to add more Supreme Court jurists.

Those numbers were essentially unchanged from a Morning Consult/Politico survey conducted in the fall, reflecting a continued lack of public appetite for what has been an increasing source of interest for liberal activists since Senate Republican Leader Mitch McConnell of Kentucky blocked consideration of Merrick Garland, then-President Barack Obama’s appointee to the court, in 2016.

In contrast, NBC’s Today on April 15 tried to justify the power grab. Kasie Hunt explained, “The push from progressives to do it now is an effort to dilute a conservative majority that could shape the law for generations.” On that day’s Good Morning America, Rachel Scott echoed, “Progressive Democrats say this is absolutely necessary to restore the balance of the Supreme Court.”

Here’s video from the MRC’s Kyle Drennen from April 15:

Since that point, the networks have mostly ignored the plan so unpopular that even Nancy Pelosi wants no part of it. But that hasn’t stopped MSNBC.com from claiming that packing the Supreme Court is the only way to “keep its integrity.”

In other words, liberals win or it’s not fair? That may not be the view of the American people, but it could be for journalists.