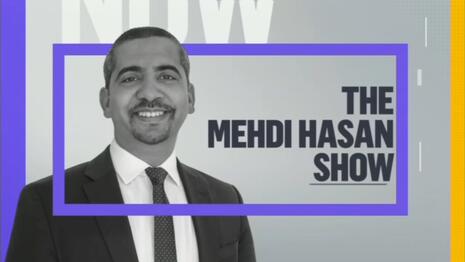 If you’re not watching MSNBC on the weekends – and why would you choose to spend your time that way? – you might not know Mehdi Hasan. But he has a show on the network, Sunday nights at 8 PM. The far-left MSNBC host  on Thursday warned his fellow liberals of a new threat: Stephen Breyer staying on the Supreme Court. The radical Hasan bashed Breyer as “naive” and “misguided” for speaking out against court packing and, also, for not immediate stepping down from the Court so Joe Biden could have an opening.

In an MSNBC.com piece, Hasan mocked the liberal justice for his insistence that the Court not becoming “politicians in robes.” The TV personality scoffed, “Seriously? It's hard to pick which words in that statement I find the most naive, misguided and self-serving.”

Hasan then went on to imply that Breyer, a fellow liberal, is dumb for not supporting a scheme by the left to pack the Supreme Court:

Breyer wants his fellow liberals to "think long and hard" before expanding, or "packing," the court, or, as he puts it, "structural alteration motivated by the perception of political influence." But why did he not say this to conservatives in 2016? When Republicans led by McConnell, R-Ky., reduced the Supreme Court from nine to eight justices for 14 months — between Scalia's death and Gorsuch's confirmation — did that not count as "structural alteration"? How else to describe the refusal to even consider President Barack Obama's nominee for the vacant seat? Or Republican Sen. Ted Cruz's suggestion in October 2016 to keep the court at fewer than nine justices for four more years if Hillary Clinton won the presidential election?

It feels odd for me to have to remind a sitting justice that nowhere in the Constitution does it say there should be nine justices on the court. The court's own website says, "The Constitution places the power to determine the number of Justices in the hands of Congress."

Shifting into the ghoulish speculation about how long the 82 year-old has left, and how Republicans taking back the Senate in 2022 might impact confirming a successor, Hasan fixated on Breyer being “the oldest member of the court since Ruth Bader Ginsburg died.” Hasan chided, “So ... if you've need of a hanger for your robe, Mr. Justice, do let me know.”

Again, since you likely are doing more productive things than watching MSNBC on the weekends, you might not know that Hasan in March fumed: “The Republican playbook, make racist policy and then complain about being accused of racism.” In January, he claimed that Antifa rioters in Portland were peaceful.

Hasan's show debuted on February 28 of this year. If you think MSNBC on weekdays is bad, wait until the weekend minor leaguers move up to Monday through Friday.

Hasan's April 4 show was sponsored by T-Mobile. Click on the link to let them know what you think of promoting such a kooky liberal agenda.