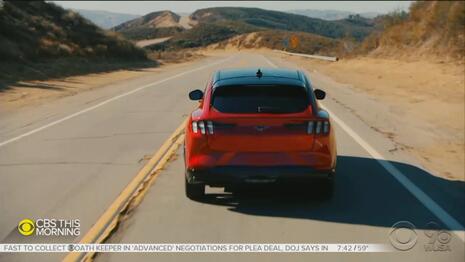 He parroted, “Automakers are also counting on the federal government. President Biden's infrastructure plan calls for 500,000 EV charging stations across the country by 2030.”

Just how much money is going to this in the infrastructure bill? According to The Wall Street Journal, $174 billion. But that eye-popping price tag (paid by taxpayers) never came up.

Tracy excitedly pushed the idea of forcing Americans to switch to all-electric cars:

The tail pipe is an endangered species, because states such as California, Massachusetts and countries including Japan, the UK and the entire European Union are soon going to ban the sale of gas-powered vehicles to combat climate change.

After keeping the “how” of that vague, Tracy finally got to making these cars affordable. It comes down to government, of course: 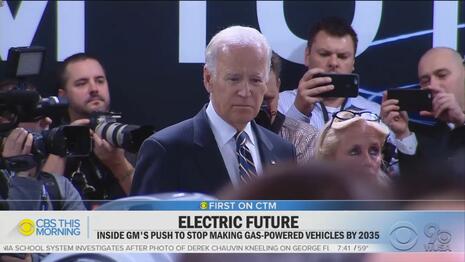 TRACY: I do think people look at electric vehicles and say “That's not something I can afford.”

TRACY: That’s because batteries have made up 70 percent of an electric vehicle’s cost. They're now getting cheaper. GM is building and testing them to further drive down costs. Automakers are also counting on the federal government. President Biden's infrastructure plan calls for 500,000 EV charging stations across the country by 2030.

A 2021 Bolt starts at $36,500. That’s not affordable to most Americans and vague generalities from the cheerleaders at CBS aren’t going to make it so. Yet King loved the marriage between crony capitalism and the federal government, hailing the GM President: “Well, you can see Mark Reuss's determination there. He ain't playing.”

The crony capitalism on CBS was sponsored by Clorox and Febreze. Click on the links to let them know what you think.

GAYLE KING: This morning in our series Eye on Earth, we have a first look at the future of electric cars in America. Transportation accounts for almost one-third of our greenhouse gas emissions that are blamed for global warming. Part of President Biden's infrastructure bill would help people buy greener electric cars which you know are more expensive. General Motors plans to stop making gas-powered cars by 2035. First here, Ben Tracy got rare access to the facilities that GM says will power its electric future.

BEN TRACY: On the assembly line at this GM plant outside of Detroit there are two things auto owners like Mark Owens will never see again. Internal combustion engines and gas tanks.  How different are these?

MARK OWENS: Completely different. I never thought I would see an all electric vehicle where we didn’t have any gas tanks in it.

TRACY: This is where GM is making the Chevy Bolt, the company's only mass market,  fully-electric vehicle. But that's about to change.

MARK REUSS (President of General Motors): It's not so much if. It's how fast?

TRACY: Mark Reuss is president of General Motors. He says electric cars will no longer be a novelty for the rich. GM is betting on new batteries, planning to launch 30 new electric vehicles across a wide range of price points in the next five years. Do you feel in a way you're kind of building a new company inside of an old company?

REUSS: I do. It's the biggest thing the industry has seen in a long, long time.

TRACY: GM is building this massive 4.5 million square foot plan in Michigan, now called Factory Zero. As in zero emissions. The name of the street out front got juiced. [Sign says “Electric Avenue.”] So the robots look ready to go? Ours were the network TV cameras let inside to see what program manager Jim Quick says is the factory of the future.

JIM QUICK: This body shop, when completed, will be the biggest body shop in all of General Motors.

TRACY: The biggest one you've got?

QUICK: Yeah. The biggest one we’ve got.

TRACY: Factory Zero will once produce a version of the once-notorious gas guzzling Hummer. And this summer, GM will launch this, a larger version of the Bolt, called an EUV You made headlines when you said you want an all EV fleet by 2035.

TRACY: There's wiggle room in there.

REUSS: There’s a little bit of wriggle room in there. But the aspiration to do that is really going to be based on consumers and how well we see some of the problems that people perceive around electric vehicles.

TRACY: I do think people look at electric vehicles and say “That's not something I can afford.”

TRACY: That’s because batteries have made up 70 percent of an electric vehicle’s cost. They're now getting cheaper. GM is building and testing them to further drive down costs. Automakers are also counting on the federal government. President Biden's infrastructure plan calls for 500,000 EV charging stations across the country by 2030. Motor Trend editor Alisa Priddle says automakers will soon offer consumers far more EV options.

ALISA PRIDDLE: The reason why people don't buy EVs right now, they don't want a funny car with a pod that doesn’t do what they need for their lifestyle and family.

TRACY: Right now, of the 250 million vehicles on the road, less than one percent are eclectic. Last year, EVs accounted for just two percent of all U.S. Auto sales. Almost all of those were sold by Tesla which is now worth more than GM, Ford, and Toyota combined. The tail pipe is an endangered species, because states such as California, Massachusetts and countries including Japan, the UK and the entire European Union are soon going to ban the sale of gas-powered vehicles to combat climate change. Ford just announced will go all-electric in Europe by 2030. It's already selling a battery-powered Mustang in the U.S. And next year, it will electrify the best-selling vehicle in the country, the Ford F-150 pickup truck.

PRIDDLE: You really cannot afford as an automaker to not have a full portfolio of electrified vehicles in really the next five years or you'll be left behind.

WILL FARRELL [ad]: Did you know that Norway sells way more electric cars per capita in the U.S.?

TRACY: GM is playing the patriotism card, telling in an ad, there's no Norway should be king of the EV road.

TRACY: And Mark Reuss says he expects some automakers won’t survive the transition.

REUSS: That desire to win is very deep. I would say anybody that is making electric vehicles now or in the future is high motivation, internally for us to win.

TRACY: A fight for the future that is electrifying motor city. For CBS This Morning, Ben Tracy, Detroit.

KING: Well, you can see mark Reuss' determination there. He ain't playing.

ANTHONY MASON: It’s an inflection point in the history of the automobile.

DOKOUPIL: The tail pipe is an endangered species. That's quite a statement.

KING: Don't you remember back in the day when you heard electric car, you did an eye roll, like either they're an elitist or they are a hippie or they are la-di-da. But that is certainly changing.

DOKOUPIL: Yeah. In the old days, it was something you were afraid to get on the freeway with. 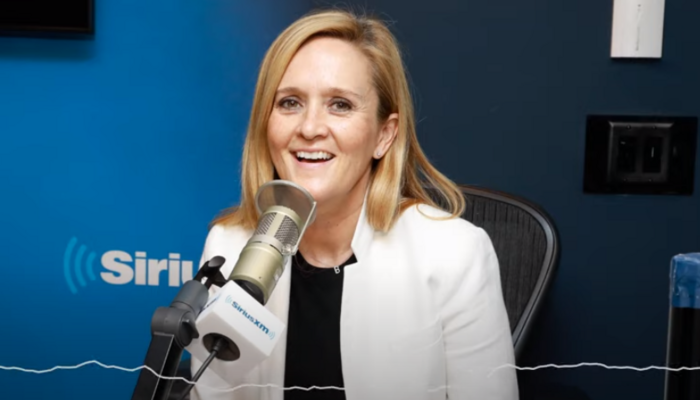 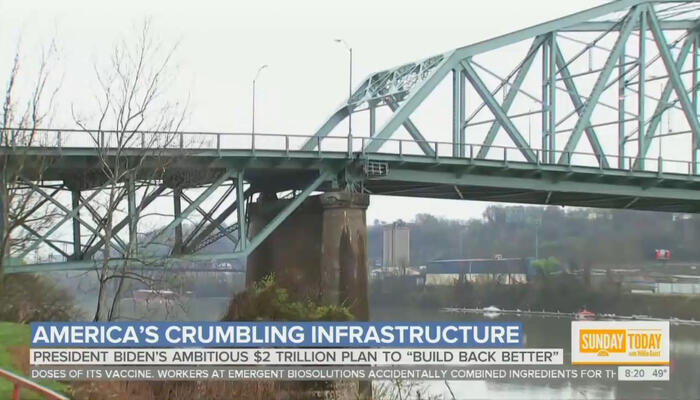 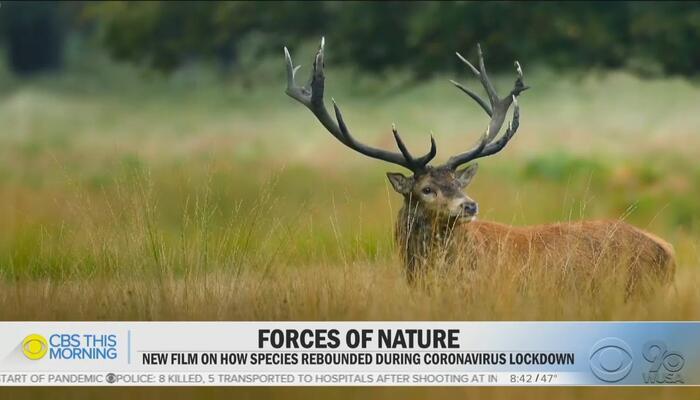 CBS's Sick Solution to Save the Planet: 'Nature Celebrates' Covid 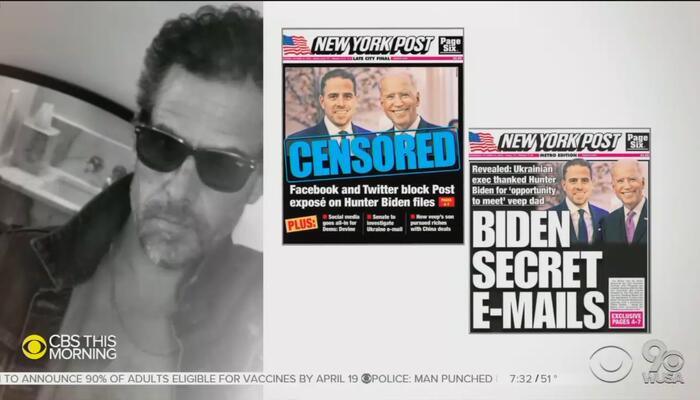 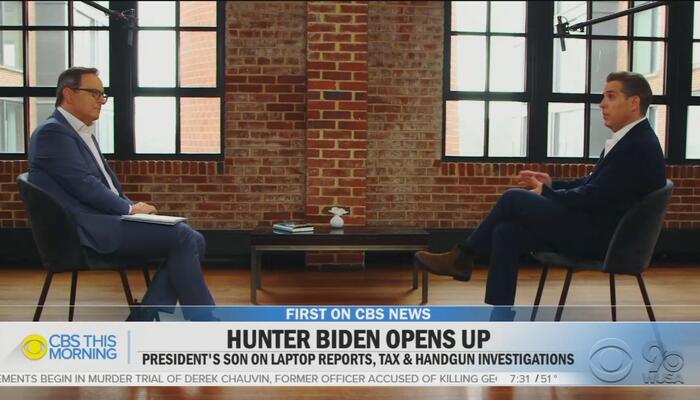 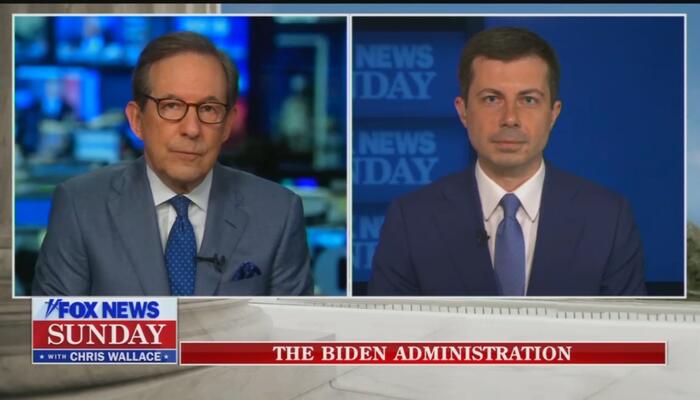 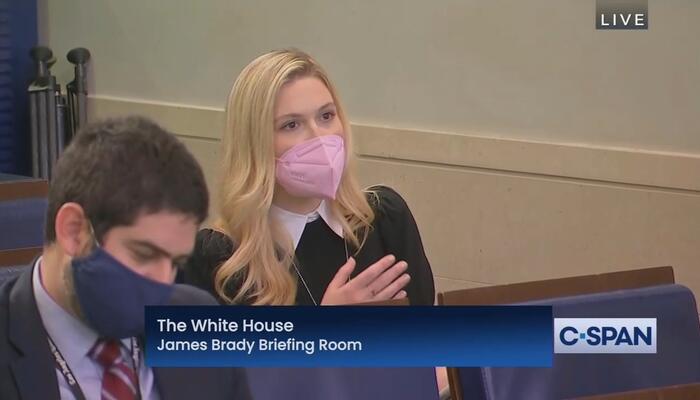