CBS This Morning’s co-hosts on Thursday joined the classless chorus of attacks trashing Rush Limbaugh in death. The journalists used words like “divisive, “racist” and “bigot” for the radio icon. Laughably, reporter Jim Axelrod blamed Limbaugh for the rise of “partisan media.” That’s right. The network of Dan Rather and his failed attempt to defeat George W. Bush with fake news is blaming someone else for “partisan media.”

The fact that CBS journalists don’t realize they are part of the partisan media helps explain Limbaugh’s appeal to millions of Americans. Axelrod added, “Through the years he often used his airwaves as a political weapon where mockery, anger, and insults were commonplace.”

The reporter piled on: “His critics labeled him misogynist, racist, homophobic and always pushing an 'us versus them' mentality.” Axelrod turned to NPR’s liberal media correspondent David Folkenflik. He derided, “He also paved the path for a Donald Trump presidency. A combination of showmanship, bombast, gleefulness, and at times bigotry and prejudice.”

This Morning’s co-hosts offered a few nice words. Anthony Mason called Limbaugh a “conservative radio icon.” Gayle King conceded, “Certainly no denying his influence and legacy. No one can deny that.”

The anti-Limbaugh hate was sponsored by Chase bank and Progressive insurance. Click on the links to let them know what you think. 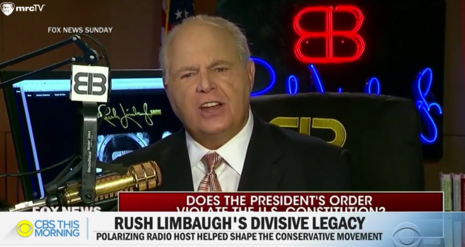 ANTHONY MASON: This morning, many leading Republicans are paying tribute to conservative radio icon Rush Limbaugh. The 70-year-old died of lung cancer yesterday. Limbaugh, who is known for his inflammatory comments and views, helped shape the conservative movement. His death comes as the Republican Party faces a new crossroads. Jim Axelrod looks at Limbaugh's legacy and impact on the GOP.

RUSH LIMBAUGH: The Democrats are going to tear this country apart.

JIM AXELROD: Until the very end, Rush Limbaugh was divisive.

AXELROD: The polarizing host helped pave the way for modern partisan media. In the 1980s, Limbaugh made a name as a right-wing talk radio host. And through the years often used his airwaves as a political weapon where mockery, anger, and insults were commonplace.

LIMBAUGH: One of the problems in America today is societal decay. The family unit is falling apartment.

AXELROD: In the '90s, Limbaugh gave voice to Republicans like Newt Gingrich and promoted conservative causes. Teetering somewhere between being part of the GOP establishment and on the fringe. David Folkenflik is a media correspondent for NPR.

AXELROD: His fans were loyal. Nicknamed Dittoheads because Limbaugh said what they felt. He attracted around 15.5 million listeners a week, making him the most listened to radio host in America.

FOLKENFLIK: They loved his style and his spirit and his fight, his rhetorical fight. And forgave him excess, any hypocrisy.

AXELROD: His critics labeled him misogynist, racist, homophobic and always pushing an “us versus them” mentality.

LIMBAUGH: We have a major immigration problem in a political party that needs a permanent underclass of voters that wants that parade of illegal people who are uneducated, don't even speak the language, they want them here. If any race of people should not have guilt about slavery, it's Caucasians. The white race has probably had fewer slaves and for a briefer period of time than any other.

AXELROD: In 2012 he said this about a woman fighting for expanded access to birth control.

LIMBAUGH: It means you're a slut, right? Makes you a prostitute. She wants to be paid to have sex.

FOLKENFLIK: He also paved the path for a Donald Trump presidency. A combination of showmanship, bombast, gleefulness, and at times bigotry and prejudice. Knit together in a way that appalled its critics and enthused his fans.

DONALD TRUMP: He is the greatest fighter and winner that you will ever meet. Rush Limbaugh, thank you.

AXELROD: After his death Wednesday, Mr. Trump called in to Fox News to pay tribute to Rush Limbaugh.

AXELROD: The death of rush Limbaugh raises the question who is the conservative media figure to steer the party next? For CBS This Morning, I'm Jim Axelrod.

GAYLE KING: Certainly no denying his influence and legacy. No one can deny that.

MASON: Profound impact on the party. No question about that.

TONY DOKOUPIL: When the history of our times is written, he will be a major figure.

KING: Exactly that. Thinking about his family today.