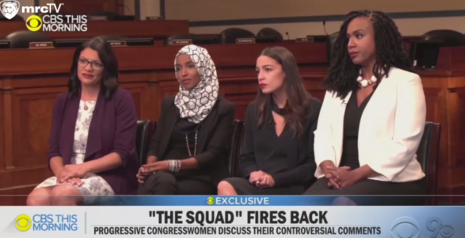 As the 2020 presidential election shifts into high gear, we see journalists questioning every motive and action of Donald Trump. That is NOT something they were interested in doing to the hard-left new congresswomen of the Democratic Party. One year ago today, on July 18, 2019, CBS This Morning co-host Gayle King acted as a propaganda mouth piece for Representatives Rashida Talib, Ilhan Omar, Alexandria Ocasio-Cortez and Ayanna Pressley.

Omar in 2017 blamed the U.S. military for killing “thousands of Somalis” during the battle of Mogadishu in 1993. That, of course, was not true. The Washington Examiner explained:

The freshman congresswoman's missive in a 2017 tweet was dug up on Monday. She had been rebuffing a Twitter user’s assertion that the Battle of Mogadishu, which killed more than a dozen U.S. soldiers, was the “worst terrorist attack in Somalia history.”

“In his selective memory, he forgets to also mention the thousands of Somalis killed by the American forces that day! #NotTodaySatan,” Omar, a Somali refugee, tweeted back.

Two days before that CBS interview, Ibram X. Kendi, who is now a regular on CBS This Morning, talked about how to be an anti-racist and refused to call Ilhan Omar an anti-Semite. This is the same woman who called Israel "evil."

She was very specific in criticizing the policies of a country. In this case, the country was Israel. Trump has specifically criticized racial groups of people. When he said that Mexicans are rapists. When he said that black people, a trait of blacks is laziness. This is a condemnation of a racial group of people. That is, effectively, racism. When we criticize a country's policies, that is not —  when you criticize Israeli policies, that's not anti-Semitic. But when you say there's something wrong with Jews, that is. I haven't heard her say that.

Finally, on July 17, 2019 King called out Omar, who has called Israel “evil,” asking, “Would you like to make it clear you're not anti-Semitic?”