CBS This Morning welcomed a new “CBS News contributor” to the network on Tuesday. Is this person there to provide partisan balance? Not really. He’s Jeff Flake. Co-host John Dickerson introduced the former Senator by prompting him on a presidential run: “Before we start, I want to find out if you want anybody to call you president. You thought about running in 2020? Are you going to run?”

After getting a “no” on that, Dickerson tried again, longing for some sort of hint from the moderate-sounding Republican: “Did you look into being a candidate to run against the president? What did you learn from the investigation that somebody else who might run would have to consider?”

Flake explained that he hopes someone steps forward to challenge Trump. As for CBS, it seems as though his beat will on the general topic of “looking for common ground.” 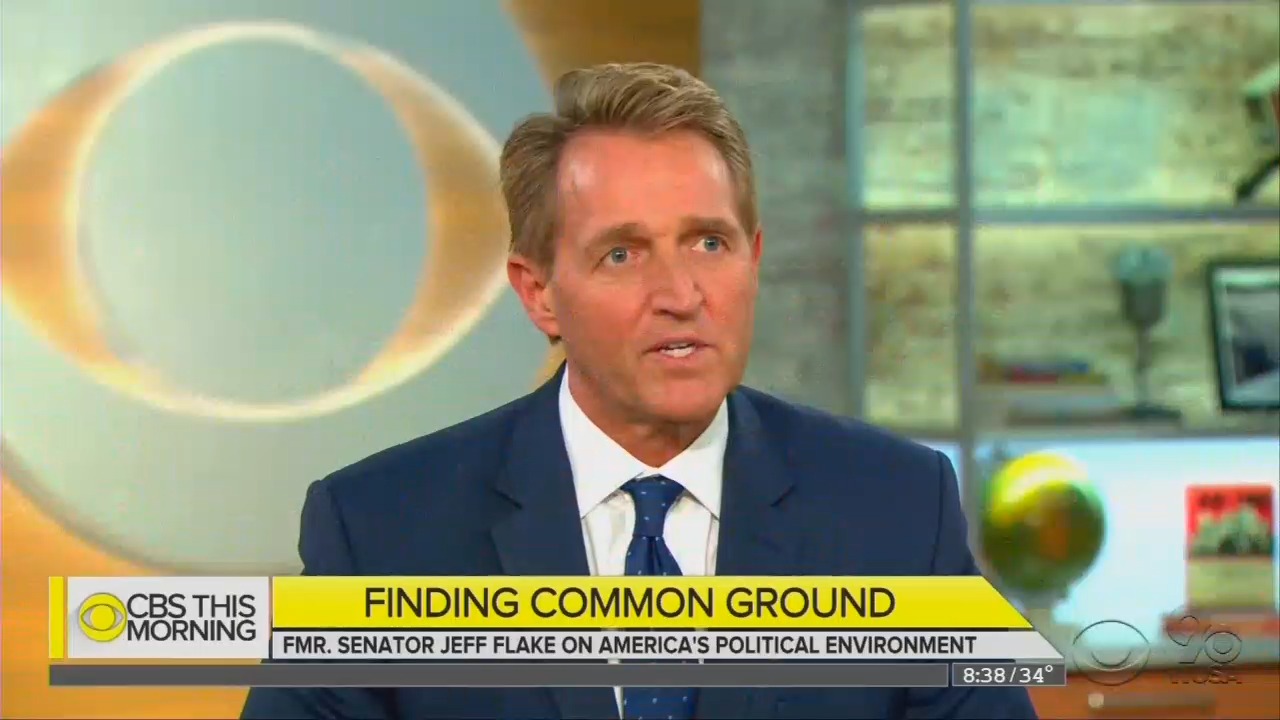 If passed, the governmental leviathan would no longer operate at the behest of the voters through their elected representatives. Instead, it would take on a life of its own even more than it does now, with so much government funding off limits for congressional infringement.

The measure raises obvious questions about constitutionality since, in effect, it abrogates Congress’s power to fund all government measures under Article I, Section 8.

That ought to end the discussion right there, but since both parties are more interested in avoiding responsibility for the process than in defending the enumerated powers of Congress, it would be up to the courts to strike down such a blatantly unconstitutional measure.

Of course, no one at CBS quizzed their new contributor on that one. One can guess many of the former senator’s appearances will be geared around bashing other Republicans while calling for common ground.

Speaking of CBS News contributors who are also being talked up for a presidential bid, the network frequently touts Oprah Winfrey’s 2020 chances. 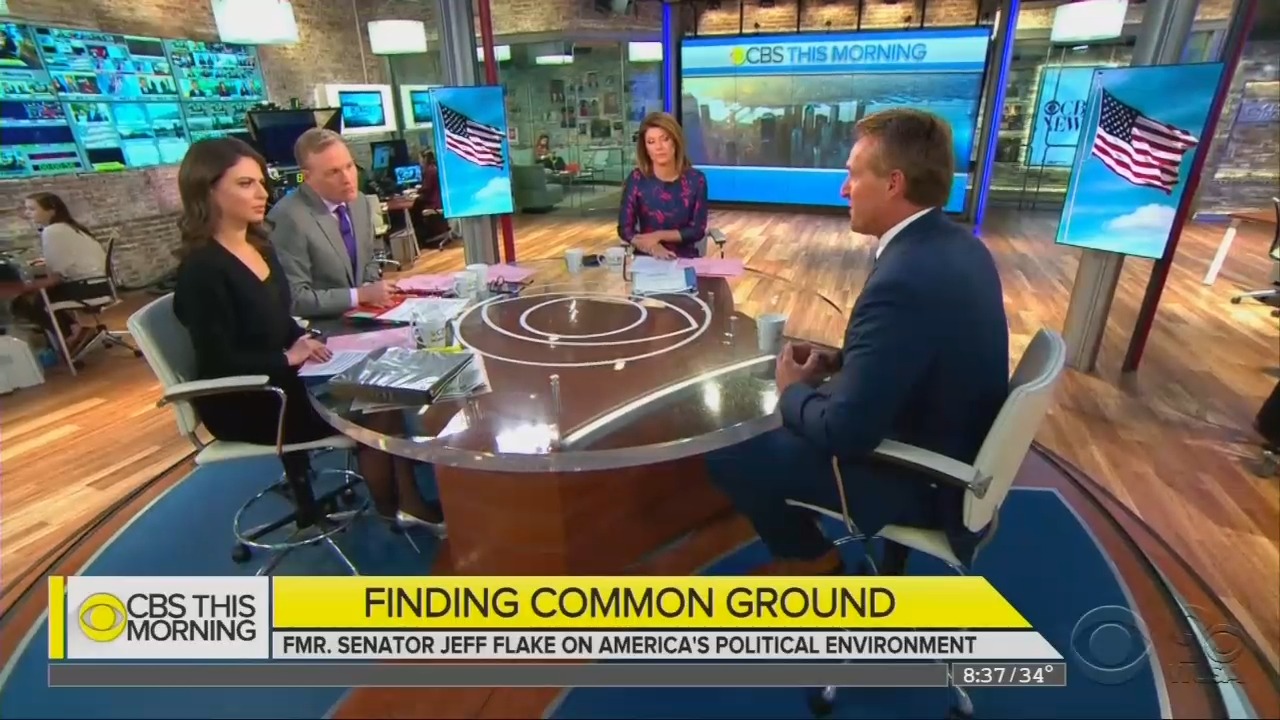 JOHN DICKERSON: Former Republican Senator Jeff flake of Arizona served in the U.S. Senate from 2013 until earlier this month. He was a frequent critic of President Trump. In his farewell address, Flake called for greater political civility and unity.

JEFF FLAKE: We are, of course, testing the institution of American liberty in ways that none of us ever imagined we would and in ways that we probably never should again. My colleagues, to say that our politics is not healthy is somewhat of an understatement.

DICKERSON: This morning, Jeff flake is here to announce what is next for him, including his new role as a CBS News contributor. Senator, good morning. I'm not calling you Jeff. Sorry.

FLAKE: Thanks for having me on. It’s great to be here.

DICKERSON: Before we start, I want to find out if you want anybody to call you president. You thought about running in 2020? Are you going to run?

FLAKE: I have always said that I do hope that there is a Republican who challenges the President in the primary. I still hope that somebody does. That somebody won't be me. I will not be a candidate.

DICKERSON: Did you look into being a candidate to run against the president? What did you learn from the investigation that somebody else who might run would have to consider?

FLAKE: I think anybody who is in the Senate looks at that at some point. There really isn't a path right now that I could see, certainly not unless you are willing to be out there already raising a lot of money. And then to basically living on the road right now. It is a difficult path anyway. The RNC and the President's campaign are now melded. They are trying to do everything they can to squelch any opposition. I still hope that some, and still some are still talking about it, do run. I think that is healthy. I'm not a fan of this President. But that won’t be me.

BIANNA GOLODRYGA: And you heard Howard Schultz say that he does think there is a path to run as an independent and to beat President Trump. What is your reaction?

FLAKE: That is a very difficult path, obviously. Traditionally, that is what history tells us. You can see a scenario where it could play out though. If there is somebody on the far-left nominated. If Republicans still nominate a weakened president, then there is perhaps a lane for an independent. That is difficult to see. But stranger things have happened. I think we are living in strange times.

DICKERSON: One of the reasons it is so difficult in the past and ever more difficult today is the cohesion within individual parties. That is particularly true of the Republican Party. Now that you are out, describe what it is like to be in the cloak room where people arrive in Washington with independent ideas full of vigor and then they get encased in a partisan system. How binding is that partisan system?

FLAKE: It is tough on both sides. I think it is particularly pronounced on the Republican side. I can tell you every incentive when you are an elected official, particularly in the Senate, is to pick your side and pick it early. Beause if you do that you only anger one side and not both. And that one side thought you were never gettable anyway. So they are not that angry. If you even indicate that your vote might be informed by a hearing that you are holding or an investigation that might be going on, then you anger both sides.

GOLODRYGA: But aren't you there to represent the constituents who voted you into office and not focus on picking sides in Washington?

FLAKE: Yes. Yes. But when you are in elected office, what you see and what the incentives seem to be now and what your voters seem to be telling you at least, those you have to get by in the primary is to pick your side and stick with it. So as long as the incentives reward that kind of behavior, that's what we are going to get.

So I hope that in the future —  and I think we will have to get there. We have to govern. Anger and resentment are not a governing philosophy. We’ve kind of seen that. So, people will have to respond more to their constituents when their constituents say this is what we want and this is what we demand. And when we have government shutdowns, I hope we are getting to the point where the public says what we don't want are for people to be in their camps and not reach across the aisle.

DICKERSON: So, you are joining CBS as a contributor and I want to ask you about what you are going to be doing. You are working on a series of pieces called “Looking for Common Ground.” So explain that but also explain that with respect to what you just said about how hard it is in Washington for people to find common ground because the system and the structure of the place makes that impossible.

FLAKE: Common ground might be dead in Washington, but it is alive and well everywhere else. On city councils, in state legislatures, any kind of association or group. People find common ground. It just often doesn't translate into something in Washington. We see one great example of when it did. Criminal justice reform. That in Texas in particular, groups on the far side of the aisle from every side of the political spectrum came together.

Some wanted to save money. Some wanted to make sure that people didn't go back into a life of crime afterwards. But for whatever reason, they said we have to quit building prisons. So, they enacted common sense criminal justice reform in Texas. A few years later, they closed eight prisons and the crime rate was still down. We picked that up in Washington. It was one of the rare examples where common ground found at the local level translated into action in Washington. There can be many more examples of that. That is what this series will look at, those areas of common ground around the country.

FLAKE: I think you can legislate in a way that would simply continue to fund the government at the current level and get around this every six months every eight months continuing resolution that ends. Yes. Legislation could be enacted to negate this kind of throwing people out of work, forcing them to come, maybe they get back pay and maybe they don't. What an awful thing to do to federal employees. It can be done.