All three networks on Tuesday fretted over the sordid details of Anthony Weiner’s sexting scandal, worrying that the “personal” is now becoming political for Hillary Clinton's campaign. A CBS This Morning analyst dismissed Donald Trump’s contention that the wife of the unrestrained Weiner may be a security risk.

Correspondent Kristen Welker reiterated the journalistic concern: “Hillary Clinton and Abedin are so close at one point she referred to her as a second daughter. Now this deeply personal matter is becoming political fodder.” Welker added, “Donald Trump trying to capitalize on the news.” 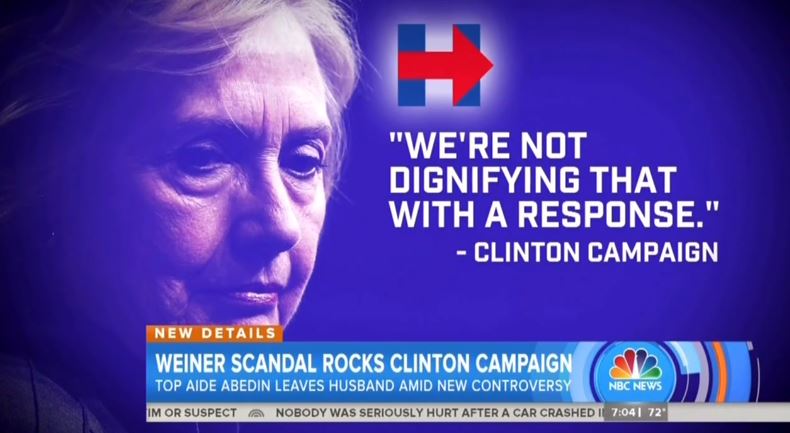 Over on CBS This Morning, analyst Mark Leibovich knocked down the idea that Abedin could be a risk as a result of her husband:

DEMARCO MORGAN: What do you make of Donald Trump weighing in here suggesting that national security could be at risk?

LEIBOVICH: You know, I don't personally see it. I mean, I think it is, I think most kind of people would be watching this and think that "Okay, the Democratic nominee's top aide is married to someone who, you know, does some pervie things on the internet. I think we're going to use that to think that somehow that person's wife's boss is irresponsible and shouldn't be elected." I mean, I don't see that as a resonant issue.

It wasn’t until the 8am hour that reporter Nancy Cordes highlighted these salient points about the Clinton aide: 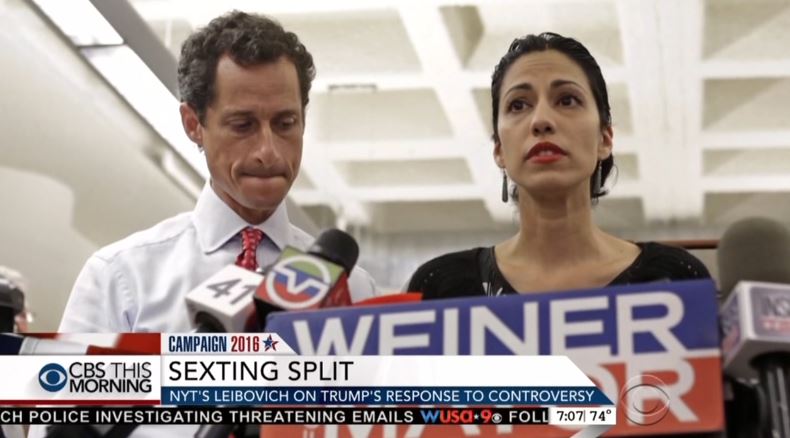 On ABC’s Good Morning America, Cecilia Vega recounted the closeness of Clinton to her favorite aide: “Abedin, Hillary Clinton's closest aide, has been in the Clinton's inner circle for two decades. She and Weiner even married by the former president. Donald Trump turning the separation into a political attack.”

A transcript of the Today segment is below: 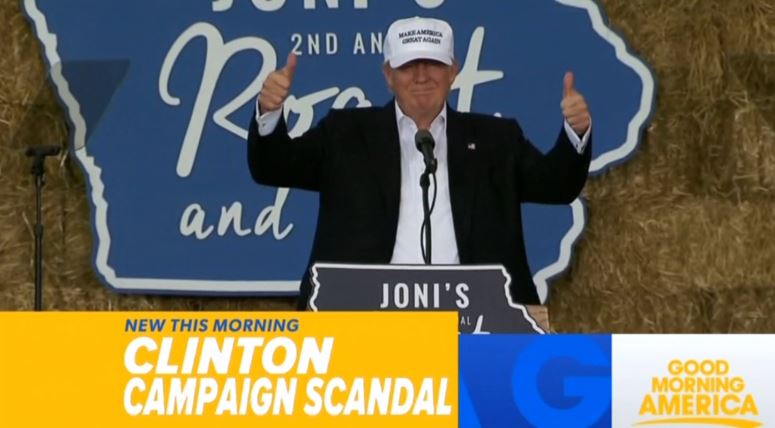 SAVANNAH GUTHRIE: Weiner's woes. Anthony Weiner dumped from two jobs on the same day his wife announces she's leaving him over his third sexting scandal. The question now, could this lead to a whole new investigation?

SAVANNAH GUTHRIE: We’ll start this morning with politics and the personal. Anthony Weiner waking up this morning out of two jobs after a third sexting scandal. The ramifications already reverberating throughout the political world as Hillary Clinton's closest aide, Huma Abedin announces her split from Weiner. And Donald Trump instantly using the opening to attack his rival. We’ve got two reports this morning, we’ll start with NBC’s Kristen Welker. Kristen, good morning.

KRISTEN WELKER: Savannah, good morning to you. Today, the Clinton campaign is grappling with the fallout of Huma Abedin’s split from Anthony Weiner. Hillary Clinton and Abedin are so close at one point she referred to her as a second daughter. Now this deeply personal matter is becoming political fodder.

This morning, Anthony Weiner seen in this photo from DailyMail.com on his own and out of work. The disgraced former congressman now on indefinite leave from his position as a political pundit on local cable channel New York One, as the New York Daily News says it will no longer publish his opinion columns. The news coming hours after longtime Clinton confidante Huma Abedin, last seen in public Sunday night at a Hamptons fundraiser, announced her split with Wiener, saying, “After long and painful consideration and work on my marriage, I have made the decision to separate from my husband.” Adding the two “remain devoted to doing what is best for our son.”

It follows a New York Post report that Wiener sent sexually suggestive messages to a woman online, including a picture of Wiener in his underwear lying next to a toddler who the Post says is his son. Wiener telling the Post he and the woman “have been friends for some time,” insisting their conversations “were always appropriate.” Deleting his Twitter account on Monday.

Donald Trump trying to capitalize on the news, saying in a statement, “Huma is making a very wise decision. I know Anthony Weiner well, and she will be far better off without him.” Trump also suggesting, without any evidence, that Wiener could have had access to classified information from his wife. Clinton's campaign firing back at Trump, “We're not dignifying that with a response.”

WELKER: The saga began in 2011, when a sexting scandal cost Wiener his House seat.

WEINER: It is a shame!

HUMA ABEDIN: It took a lot of work and a whole lot of therapy to get to a place where I could forgive Anthony.

WELKER: But behind the scenes, a documentary filmmaker captured her private pain.

UNIDENTIFIED MAN [“WEINER”/SHOWTIME]: How are you feeling today?

WELKER: Even as Weiner told Savannah he was a changed man.

WELKER: Now it's Abedin's turn to move on.

Some childcare experts and one state senator are now calling on Child Protective Services to investigate Weiner for possible neglect. We reached out to Weiner, so far no response. But one Democratic source tells me that he was with Abedin in the Hamptons over the weekend. He returned here to Manhattan once the story broke. Abedin continues in the Hamptons, where Hillary Clinton is on that fundraising swing. Savannah, Matt?