For the second day in a row, NBC on Wednesday ignored the high level firings at the Democratic National Committee. Politico saw it as “heads roll at the DNC.” Yet, the four hour-long Today show found no time for the story. Instead, reporter Hallie Jackson trumpeted a “civil war” within the Republican Party.

Jackson played clips of Barack Obama and Donald Trump attacking each other and then chided, “That back and forth coming as the GOP civil war seems to be back, too. Paul Ryan's office saying he never asked for Donald Trump's endorsement.” 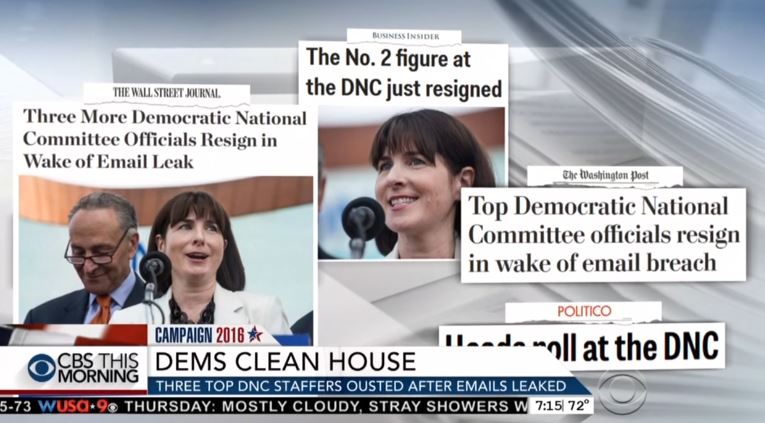 ABC also ignored the chaos at the DNC. Over on CBS This Morning, co-host Norah O’Donnell explained it in a news brief:

NORAH O’DONNELL: There is a new shake-up in the Democratic Party over the embarrassing e-mail hack. The CEO of the Democratic National Committee Amy Dacey stepped down yesterday. The chief financial officer and communications directors are also out and the departures are the latest fallout from hacked e-mail is that appear to show they favored Hillary Clinton in the primary season over Bernie Sanders during the primary season. 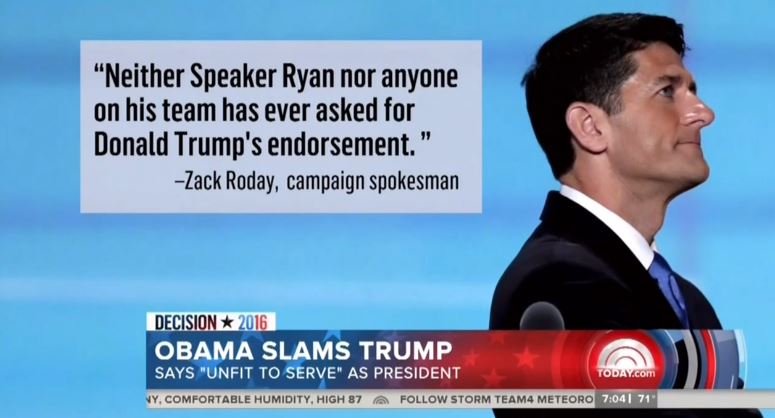 Here’s how Politico explained the controversy and scandal engulfing the DNC:

With just three months until Election Day and the Democrats’ official party apparatus struggling to right itself from months of dysfunction and the scandal caused by the WikiLeaks email hack, interim Democratic National Committee chair Donna Brazile cleaned house Tuesday with the ouster of three top officials.

CEO Amy Dacey, communications director Luis Miranda and chief financial officer Brad Marshall are all leaving the organization, the DNC announced Tuesday afternoon, shortly after staffers were informed of the changes in a meeting. The announcement praised all three outgoing officials, but people familiar say the departures were heavily encouraged.

For some reason, NBC has, thus far, found chaos within the Democratic Party less interesting than a GOP “civil war.”

Transcripts of the two “civil war” comments from the morning shows can be found below:

DONALD TRUMP: The fact he doesn't appear to have basic knowledge around critical issues means that he's woefully unprepared to do this job. Mitt Romney and John McCain were wrong on certain policy issues but I never thought that they couldn't do the job. There has to come a point in which you say somebody who makes those kinds of statements doesn't have the judgment, the temperament, the understanding, to occupy the most powerful position in the world.

TRUMP: I think he is the worst president maybe in the history of our country.

JACKSON: That back and forth coming as the GOP civil war seems to be back, too. Paul Ryan's office saying he never asked for Donald Trump's endorsement. Trump stunningly not giving him one. “I’m not quite there yet,” he tells the Washington Post.