Reporter Nancy Cordes hyped the fact that Nebraska is “home to the Oracle of Omaha, Warren Buffett, one of several billionaires she's counting on to blunt Trump's business bona fides.” In a follow-up segment, O’Donnell featured Buffett grilling Trump, “I ask Donald Trump, have you no sense of decency?”

O'Donnell explained, “Buffett quoted those famous words from former chief Army counsel Joe Welch. He posed those questions to Senator Joe McCarthy after he attacked an aide in congressional hearings about communism in the 1950s.” 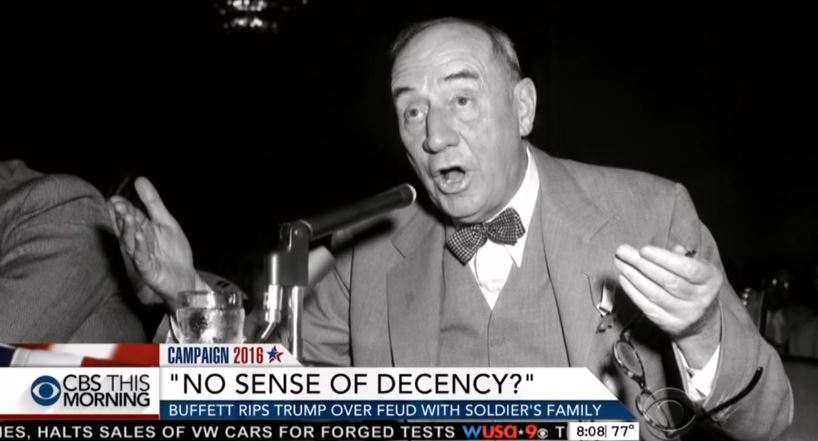 Over on ABC’s Good Morning America, Tom Llamas simply identified Buffett as a “fellow billionaire.” He, too, played video of the businessman trashing Trump as a modern McCarthy.

On the Today show, Tuesday, Hallie Jackson regurgitated, “Clinton getting backing from billionaires like Warren Buffett, laying down a challenge to Trump. ‘Release your returns,’ Buffett says.” 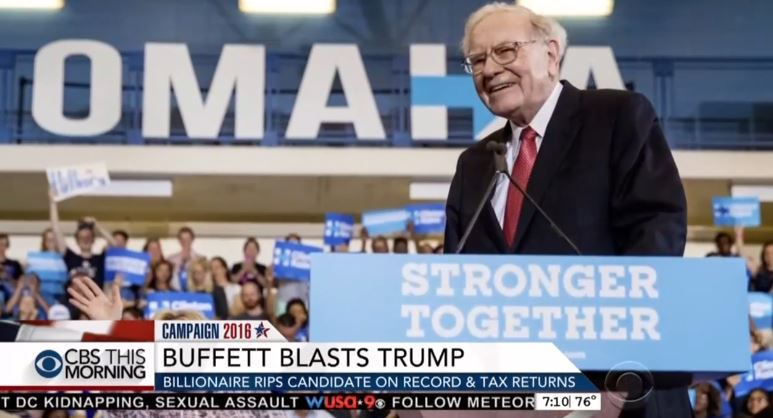 It’s not as though Buffett’s liberal leanings are unknown. In 2008, he repeatedly called for raising taxes, saying, “I think we ought to take a little more out of the hides of fellows like me.” He also endorsed Barack Obama that year.

In 2013, Buffett gave $100 million to pro-abortion groups. So, should it be any surprise that the liberal businessman is supporting the liberal Clinton?

NORAH O’DONNELL: A new CBS news poll shows six in ten voters say Donald Trump is not prepared to be president. About the same number say Hillary Clinton is prepared for the job. Clinton campaigned yesterday in Omaha, Nebraska with Warren Buffett. The billionaire investor tried to push Trump into releasing his tax returns. Nancy Cordes is in Washington. Nancy, good morning.

NANCY CORDES: Good morning and there's a reason that Clinton headed to Nebraska so soon after her convention and it's not because of the state’s five electoral votes. It's because it’s home to the Oracle of Omaha, Warren Buffett, one of several billionaires she’s counting on to blunt Trump’s business bona fides.

WARREN BUFFETT: I'd like to make him an offer. An officer I hope he can't refuse.

CORDES: Buffett told an Omaha audience his tax returns are being audited just like Trump’s and made this proposal.

BUFFETT: I'm going to bring my tax return. He can bring his tax return. Nobody is going to arrest us, it is not —  there are no rules against showing your tax returns. You're only afraid if you've got something to be afraid about.

CORDES: Forbes magazine said Buffett is the world's third richest person with at least $60 billion. He argued Trump isn't the brilliant businessman he claims to be.

BUFFETT: One time an another, he went into bankruptcy. I've really never known another businessman that brags about his bankruptcies.

CORDES: Just a few days ago it was another billionaire, Dallas Mavericks owner Mark Cuban , who was helping Clinton to make that debate.

MARK CUBAN: Companies and jobs, they won't be created by terrifying people. No, Donald Trump, they'll be created by inspiring people like Hillary Clinton does.

CORDES: The goal is to chip away at trump's biggest selling points. A recent CBS News battleground tracker poll found he had a two-point edge when it came to who could best handle the economy. At a homecoming rally in Richmond last night, Tim Kaine brought up his fellow Virginian Khizr Khan and Trump’s latest comments about him.

TIM KAINE: Is there no limits to suspend and he wants to be commander in chief?

CORDES: Warren Buffett blasted Trump over the Khans as well specifically, he questioned the claim that he too, had sacrificed for country by creating jobs. Buffett said he and Trump had created jobs and got very rich doing it, which he said does not qualify as a sacrifice, Charlie.