A smug Chuck Todd on Monday dismissed Benghazi at the Republican Convention as nothing more than “cheap unity” for the "lowest common denominator” crowd. Chris Matthews railed that the GOP speakers were presenting “third world rhetoric.” Todd insulted, “Benghazi... does serve Trump in another way positively, politically, which is  a way to unify this crowd quickly. It's a way to get cheap unity.”

Citing anti-Trump moves at the convention, the Meet the Press host condescended, “Especially today given what happened this afternoon, [Trump] needs a little cheap unity here, getting things to get everybody unified.”

TODD: Using — Beating up Hillary, using Benghazi to beat up Hillary is an easy way to do it. They're doing a little Fast and Furious now. That's another thing.  It's sort of lowest common denominator stuff that just, sort of, everybody will give you an applause line for. 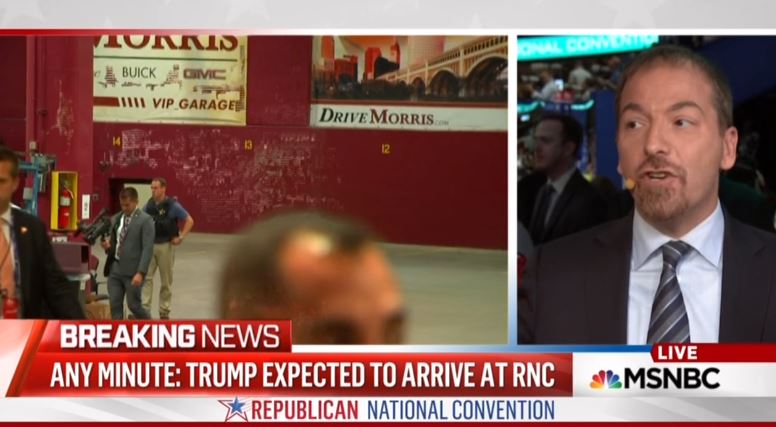 Matthews sneered, “And then you say Hillary Clinton is a murderer. I mean, this is third world rhetoric.  This isn't the usual kind of policy debate.” Of course, this is the same person who fawned over Cindy Sheehan, a woman who accused George W. Bush a “killer.” He encouraged her to run for Congress.

Earlier in the night, Matthews ranted that Pat Smith, the mother of a son killed at Benghazi, had “ruined” the evening. 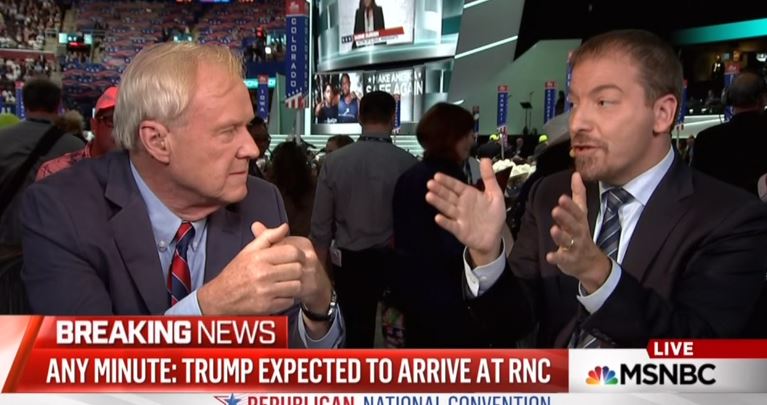 CHUCK TODD: Can I just tell you I just think the biggest mistake in all of this, if you're Trump when you're talking about Benghazi is not talking about the intervention, the decision itself. That's where there is traction. That's where you can have a conversation, because the biggest, I think, controversial foreign policy decisions of the Obama-Clinton, if you’re gonna make it — if you’re the Republicans, you want to make this about Obama foreign policy, then you start making, okay, the Libya intervention without the follow through after the toppling, decision not to go into Syria, what was done in Iraq. Frame it around that. I think what happens is when you use the emotion, you end up —  you end up, I think, just reinforcing red and blue, in this case, and you actually lose out on the argument that I think can become a persuasive argument, right?

CHRIS MATTHEWS: Well, I wonder if Trump isn't more basic than that. He started today by basically saying the President is on the other side when it comes to police shootings and everything else. That's the second time he's done it in a couple of weeks saying, there's something going on here, there’s something murky and spooky about this that somehow the President isn't really against the shooting of the three police yesterday in Baton Rouge or was he against to what happened in Orlando, the 49 people dead. So, you do that and then you pile on top of indicting the President for being on the bad guys' side, in cahoots with terrorists and with domestic killers. And then you say Hillary Clinton is a murderer. I mean, this is third world rhetoric.  This isn’t the usual kind of policy debate.

MATTHEWS: Well, why throw that out here?

TODD: You lose —  there are 32 percent of voters in our MSNBC Wall Street Journal poll who say neither Hillary Clinton nor Donald Trump has the judgment to be president. That's your swing vote. Okay? That's who you need to be persuading here. Conspiracy theories don't persuade those folks.

MATTHEWS: And so why did he say that Ted Cruz's father had something to do with killing Jack Kennedy?

MATTHEWS: Okay. Let’s talk about the dramatic purpose for this. Monday night, Tuesday night, Wednesday night, Thursday night. Thursday night is easy. Trump has to give the speech of his life. And Wednesday night Pence has to got to give a barn burner, a real keynoter that really brings this place, just bring up to the roof of anger against the enemy. What's tonight and tomorrow night about?

TODD: Well, I think tonight is about, look -- Benghazi does serve one — another political — does serve Trump in another way positively, politically, which is it's a way to unify this crowd quickly. It’s a way to get cheap unity, to put it — where he kind of needs it.  Especially today given what happened this afternoon, he needs a little cheap unity here, getting things to get everybody unified.

TODD: Using — Beating up Hillary, using Benghazi to beat up Hillary is an easy way to do it. They’re doing a little Fast and Furious now. That’s another thing.  It’s sort of lowest common denominator stuff that just, sort of, everybody will give you an applause line for.