The network morning shows on Monday took another day to gush over Barack Obama’s “awesome” performance at Saturday’s White House Correspondence Dinner. The “comedian-in chief” “dropped the mic” and the journalists at ABC, CBS and NBC loved it. Good Morning America’s co-hosts provided the most effusive praise. Former Clinton operative George Stephanopoulos opened the show by praising, “He's getting so good at this and everyone was a target on Saturday night.”

Spencer cheered Obama’s “well done” performance that “had everyone laughing... He even got his own drop the mic moment.”

GMA journalists offered a full report on Saturday’s event. So, did the reporters at CBS This Morning. Gayle King applauded, “President Obama made his farewell appearance as the guest of honor. He got some really huge laughs.” 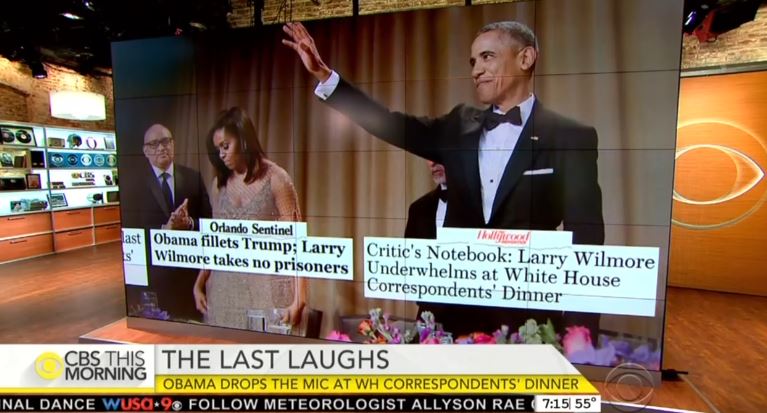 Julianna Goldman noted, “The President really sharpened his knives for the Republican front-runner” and then played this clip:

BARACK OBAMA: They say Donald lacks the foreign policy experience to be president. But, in fairness, he has spent years meeting with leaders from around the world: Ms. Sweden. Ms. Argentina. Ms. Azerbaijan. And there's one area where Donald's experience could be invaluable. That's closing Guantanamo. Because Trump knows a thing or two about running waterfront properties into the ground. 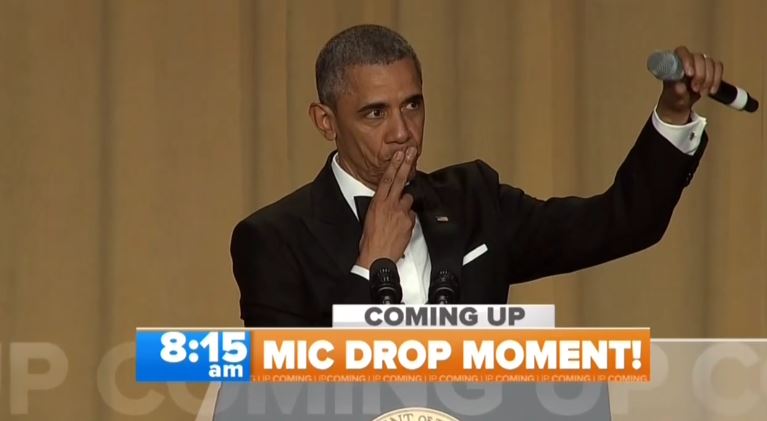 Over at NBC’s Today, Tamron Hall touted, “The President getting rave reviews, standing ovation there as well.” However, Matt Lauer offered rare bipartisanship, asserting, “The President has amazing comedic timing. He really does, as did President Bush before him before him. Also very good.” NBC also displayed restraint by waiting until 8:17am in the morning to cover the dinner.

But, of course, these networks also covered the dinner on Sunday’s morning and evening newscasts. On Sunday’s GMA, Paula Faris hailed Obama’s “impressive” performance. She lauded, “He hit it out of the park and he had an epic moment at the end.” On Today, Hallie Jackson extolled, “The President played well. People found him to be very funny.”

An analysis of the jokes played on Sunday’s evening newscasts focused on Obama mocking critics, such as Reince Priebus and how 2016 may be “the end of the Republic.” NBC’s Nightly News highlighted the President pro-Hillary Clinton joke. (It’s anyone’s guess who “she will be,” in reference to the next President.)

A transcript of the May 2 GMA segment is below: 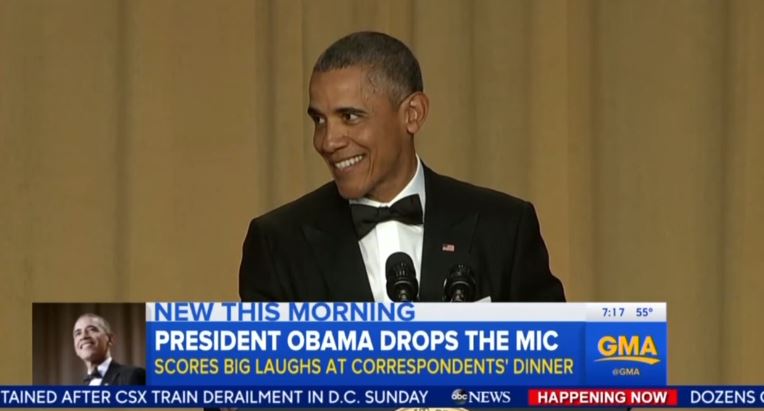 GEORGE STEPHANOPOULOS: President Obama takes some shots of his own. Obama's drop the mic moment.

ROBIN ROBERTS: A lot of people still talking about the President's remarks over the weekend at the White House Correspondents Dinner.

STEPHANOPOULOS: Obama is out. That was his final line. Dropped the mic right there. And you know, he's getting so good at this and everyone was a target on Saturday night. Even little Prince George. Take a look.

BARACK OBAMA: Last week, Prince George showed up to our meeting in his bathrobe. That was a slap in the face. A clear breach of protocol.

STEPHANOPOULOS: He’s got the timing down.

OBAMA:They say Donald lacks the foreign policy experience to be president. But, in fairness, he has spent years meeting with leaders from around the world: Ms. Sweden. Ms. Argentina. Ms. Azerbaijan.

LLAMAS: I even saw one of trump's son actually laugh at that jokes. So, it was kind of funny.

ROBERTS: And Malia’s dad had some fun this weekend, Lara.

LARA SPENCER: Oh, absolutely. He did great, didn’t he? And this was the big one, the last one. President Obama will be looking for a new job when he leaves the White House, but he may have a future as a stand-up comedian-in-chief. He had everyone laughing at the White House Correspondent’s Dinner. And he even got his own drop the mic moment.

OBAMA: You all look great. The end of the republic has never looked better.

SPENCER: It was the end of an era, the last time president Obama would take the stage at the White House Correspondents Dinner as commander in chief.

OBAMA: Someone jumped the fence last week. But I have to give the Secret Service credit, they brought Michelle back. She’s safe. She’s safe back at home now.

SPENCER: Doing a little roasting of his own.

OBAMA: GOP Chairman Priebus is here as well. The Republican Party, the nomination process, it’s all going great. Keep it up.

SPENCER: And giving us a glimpse of what's next.

OBAMA: If this material works well, I'm going to use it as Goldman Sachs next year. Earn me some serious Tubmans.