The journalists on Good Morning America, Thursday, eagerly touted a new poll finding that “most the country doesn’t like” Ted Cruz and Donald Trump. What did they ignore from their own survey? A majority of Americans aren't fond of Hillary Clinton either. Reporter Jon Karl trumpeted, “This poll looks at the Republican candidates and shows that the most of the country simply doesn't like them.”

Karl thundered, “Look at Ted Cruz. He is now at 53 percent unfavorability. That is the highest unfavorability he has seen throughout this campaign.” The correspondent derided, “He is growing more unpopular by the day.” Sounds pretty bad, right? Here’s what is buried in the PDF of the poll results:

The leading Democratic candidate also is under water. Hillary Clinton was seen unfavorably by
52 percent in an ABC/Post poll last month, 2 percentage points from her worst, 54 percent
unfavorable in April 2008.

So, Clinton this month is almost as unpopular as Cruz. Last month, the same poll found her unfavorable rating at 52 percent. Exactly the same as Cruz. That survey was conducted from March 3 through the 6th. At the time, Good Morning America journalists did not report on those findings.

ABCNews.com revealed on Thursday: “[52 percent] was the highest unpopularity in ABC/Post polling for any Democratic Party candidate in an election year.” 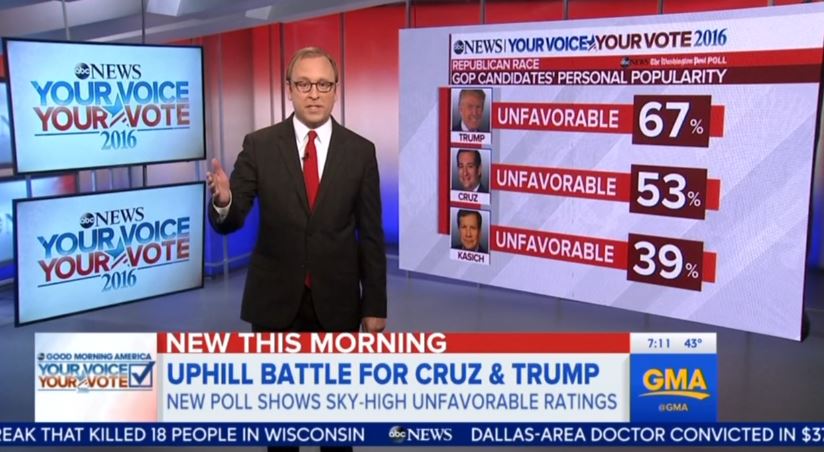 GEORGE STEPHANOPOULOS: Let’s get more on this now from Jon Karl down who is down in Washington. And Jon, we have this new ABC News/Washington Post poll out this morning that showed the two Republican front-runners actually having some issues with the general electorate.

JON KARL: That's right. This poll looks at the Republican candidates and shows that the most of the country simply doesn't like them. If you look at Donald Trump, his unfavorability rating is at 67 percent of the general public of registered voters. But look at Ted Cruz. He is now at 53 percent unfavorability. That is the highest unfavorability he has seen throughout this campaign. He is growing more unpopular by the day. The only candidate not disliked by most of the electorate is John Kasich. And, of course, he's mathematically eliminating by clinching before the convention.