Reporter Jon Karl reminded, “Don't forget, it was Donald Trump and Ben Carson who insisted this only be two hours. Ten candidates, two hours, closing statements, it's a matter of math.” So, if the debate had been a three hour event with fewer candidates, there would have been fewer obnoxious, left-wing questions?

George Stephanopoulos, a former Clinton operative who secretly donated $75,000 to the Clinton foundation, appeared to blame the Republican candidates for not overcoming the bias: “One test of the candidate is getting out your answers in 30 or 60 seconds. Getting that message out. This puts them to that test.” 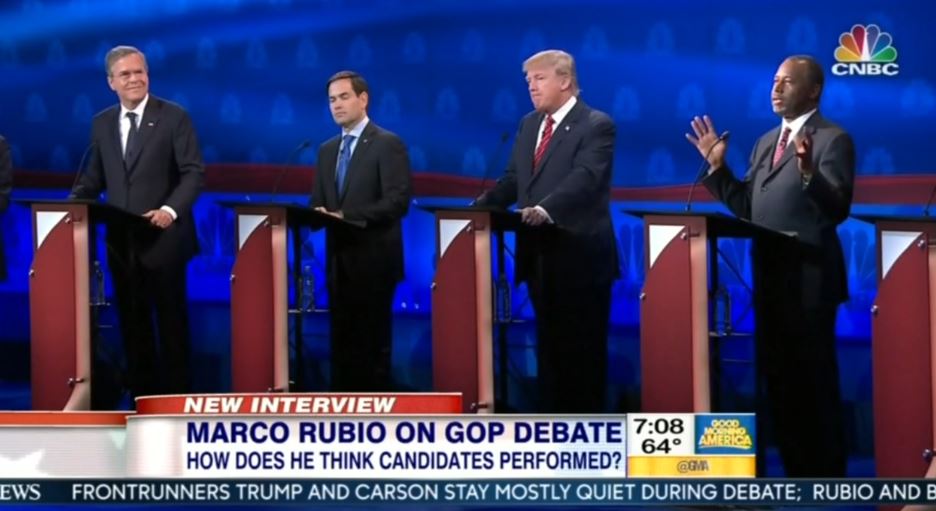 Interestingly, the journalists also buried Jeb Bush. Karl predicted, “Frankly, if he [Bush] doesn't improve in the next debate, he might not make it to Iowa.” Dowd agreed, “I don’t even think the next debate will help him.”

On Wednesday, Dowd blurted out that Trump suffers from “electile dysfunction.”

A transcript of the October 29 segment, which aired at 7:09am ET, is below:

GEORGE STEPHANOPOULOS: Let's break this down with our political team, Jon Karl and Matt Dowd are here. You saw Marco Rubio going on offense there. Was he the winner?

JON KARL: He was the clear winner last night, George. He was strong. He was consistent throughout the debate. He seemed to be the best prepared and he vanquished his primary rival at this point, Jeb Bush. Jeb came right at him on that issue of missed votes and, frankly, it was Rubio who silenced Bush on that with that line. 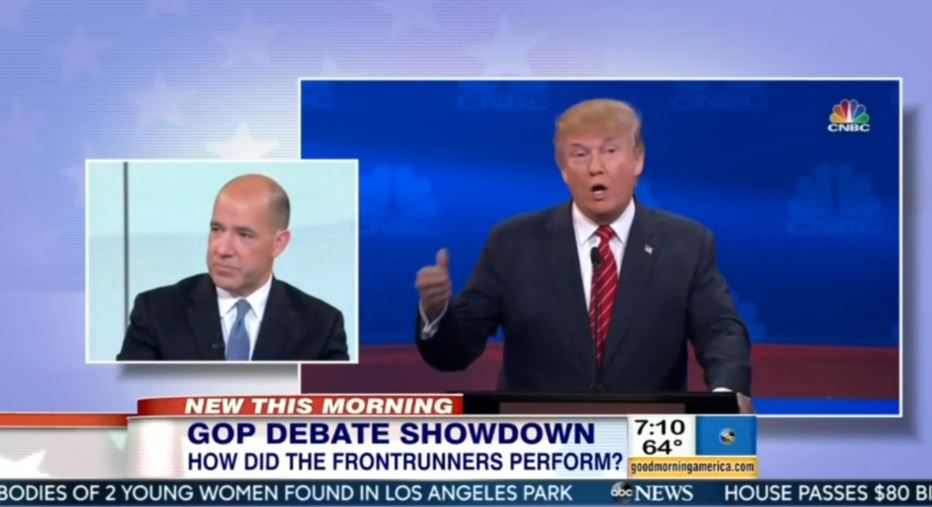 STEPHANOPOULOS: Matt Dowd, even some of Jeb Bush's supporters today are being quoted saying he was crushed. Can he come back?

MATT DOWD: I think — It wasn't just the moment, which I think was a very bad moment for him where he was slayed by his apprentice in the course of this. It's also almost every single answer he gives. He doesn't look like he's prepared. The first two debates we had, he didn't look prepared. This one, he doesn't. I think we’ve gone from we thought Bush was the liability for him. Boy, ultimately we're learning Jeb may be the liability from him and he’s gone from an exclamation point to a question mark and he’s headed to a period.

KARL: And frankly, if he doesn't improve in the next debate he might not make it to Iowa.

KARL: I mean, I think that was such a weak performance that if he does not turn it around with the next debate there will be questions about whether or not —

DOWD: I don’t even think the next debate will help him.

STEPHANOPOULOS: Meanwhile, the front-runners, Donald Trump and Ben Carson did not dominate the debate last night, but I looked at it and thought that might not have hurt them at all.

DOWD: Well, I don't it hurt them fundamentally in this race, but the problem at this point in the campaign you have to grow your support and start moving towards momentum and the only two people that came out of this debate, I think, with momentum was Rubio and I think Ted Cruz had very good moments in the course of this and I think he has momentum coming out of here.

STEPHANOPOULOS: His big moment, Jon Karl, was attacking the moderators. The moderators coming under a lot of heat last might.

KARL: Absolutely and then everybody else piled on, Chris Christie had a good moment going after the moderators but Ted Cruz did himself well in this debate and so did Chris Christie so although Rubio, the clear winner I would say those two did themselves quite well.

ROBIN ROBERTS: You know, George, one of the big questions for our viewers asking on Twitter and Facebook was also about the moderators. Diane wrote this: "Less questions and more time to give an answer. Our problems can't be fixed with 30 to 60 second sound bites.” And Jon and Matt, it seems like the candidates are basically saying the same thing.

STEPHANOPOULOS: Let me tell — Go ahead.

KARL: Don't forget, it was Donald Trump and Ben Carson who insisted this only be two hours. Ten candidates, two hours, closing statements, it's a matter of math.

STEPHANOPOULOS: And one test of the candidate is getting out your answers in 30 or 60 seconds. Getting that message out. This puts them to that test.