What’s going on here? Good Morning America, somehow, aired a shockingly positive portrayal of Ben Carson on Wednesday, promoting the Republican as “amazing” and having a “resume like no other candidate.” This is quite a change from ABC’s previous attacks on Carson.

Lara Spencer introduced a “closer look" at the man who “went from being called a dummy in grade school to becoming one of the world's most respected neurosurgeons.” Reporter David Wright enthused, “He has a resume like no other candidate and that's just the start of it. Dr. Carson is full of surprises.”

With no liberal slant, Wright even highlighted Carson’s attack on Barack Obama in 2013: 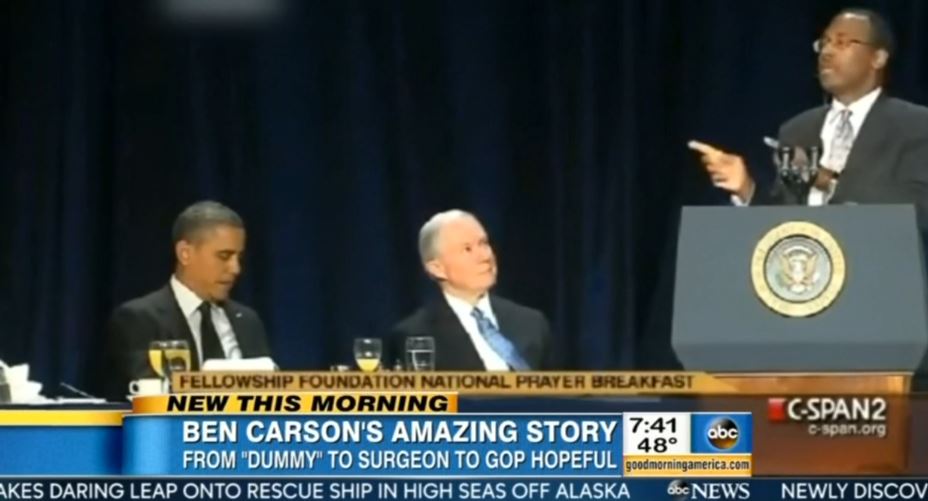 DAVID WRIGHT: His political debut came at the National Prayer Breakfast in 2013 when he went off on what he sees the pitfalls of ObamaCare.

BEN CARSON: Now they have some control over their own health care.

WRIGHT: The President sitting just a few seats away.

A transcript of the October 21 segment is below:

LARA SPENCER: We’re back now with a closer look at one of the leading GOP presidential candidates. Ben Carson, he went from being called a dummy in grade school to becoming one of the world's most respected neurosurgeons. ABC's David Wright has his story. Good morning, David. 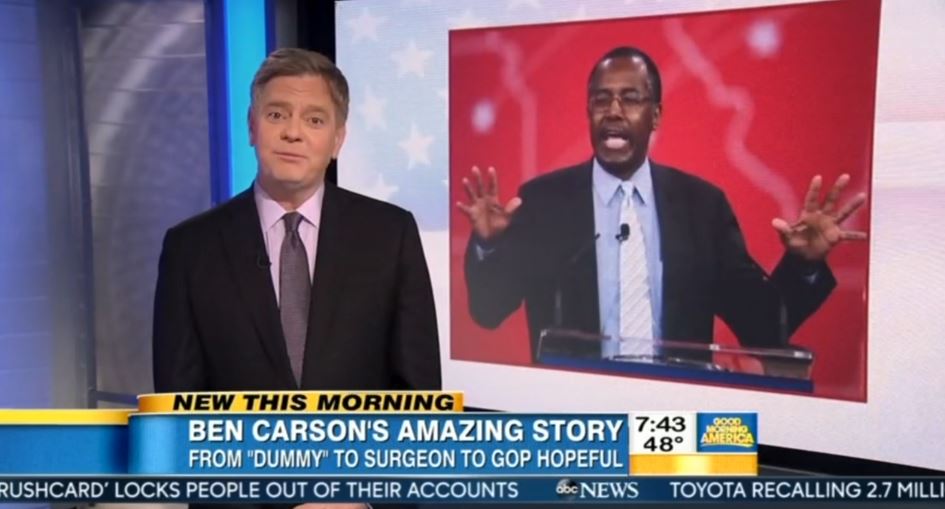 DAVID WRIGHT: Good morning, Lara. Politics is not brain surgery. But if it were, Ben Carson alone could say been there, done that. He has a resume like no other candidate and that's just the start of it. Dr. Carson is full of surprises. At Johns Hopkins, he was the first neurosurgeon ever to separate twins joined at the head. A 22-hour surgery re-enacted in a new Discovery Life documentary.

BEN CARSON: It was like working your way through a big bowl of spaghetti.

CUBA GOODING JR.: If someone doesn't operate on this man soon, he will die. 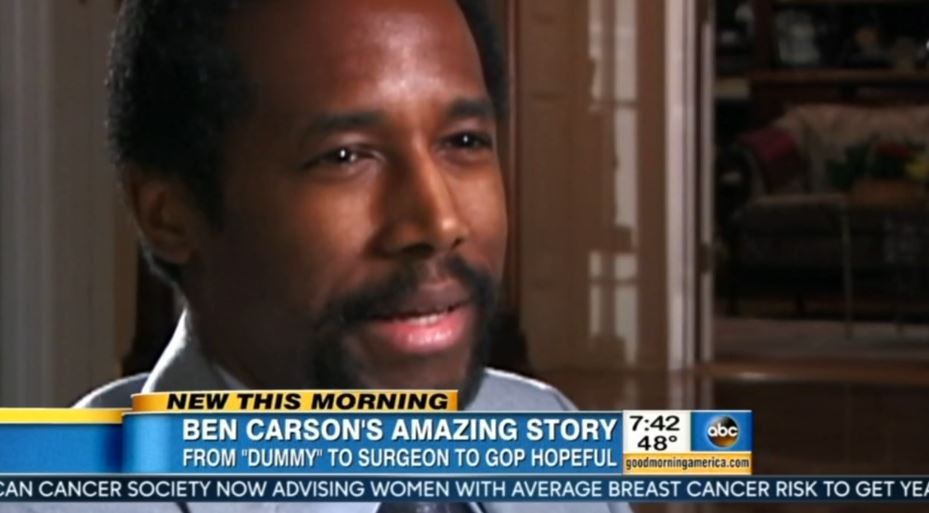 WRIGHT: If you're Ben Carson, brain surgery is easy, comedy, that's hard. But he had a cameo in a Farrely brothers film separating Greg Kinnear and Matt Damon in the 2003 movie account Stuck on You.

CARSON: We lost them.

WRIGHT: His political debut came at the National Prayer Breakfast in 2013 when he went off on what he sees the pitfalls of ObamaCare.

CARSON: Now they have some control over their own health care.

WRIGHT: The President sitting just a few seats away.

JON WARD (senior political correspondent, Yahoo): Once that happened, there began to be people saying, coming to him and say you should run for president.

WRIGHT: The 64-year-old doctor told Discovery he wasn't always thought of as a genius.

CARSON: When I was in grade school, my nickname was dummy because none of my classmates thought that I was very smart. The teachers agreed with them and I agreed with them.

WRIGHT: He grew up poor. His single mother, one of 24 siblings, had only a third grade education, an illiterate house cleaner who made her sons do book reports twice a week.

WRIGHT: He said that experience made him an academic success.

DR. CRHISTOPHER LEGGETT (Ben Carson’s long time friend): His character, you do unto others as you would have them do unto you. He has a very strong biblical faith.

WRIGHT: In a 1999 ABC News interview, Carson claimed he wasn't always so soft-spoken.

CARSON: I would hit people with hammers and throw rocks at people. I almost put a guy's out one time. Tried to even hit my own mother in the head with a hammer.

WRIGHT: Carson said when he was 14, he even tried to stab someone to death.

CARSON: Fortunately he had a large metal belt buckle on under his clothing and a knife blade struck that with such force it broke and, of course, he fled in terror.

WARD: I think he basically credits his faith with changing his entire persona, the entire way he interacts with people.

WRIGHT: It was at Yale University Carson eventually met his wife a classical musician. She played the violin at his presidential announcement. The couple have three sons and two granddaughters. One other surprise, Dr. Carson became a Republican just a year ago. Well, that new Discovery Life documentary Ben Carson: re-airs this coming Sunday. Lara?