CNN’s Cooper Lashes Out: Clinton Connection to Me Is ‘Total Bunk’

CNN’s Anderson Cooper on Tuesday was forced to respond to an accusation that he is too close to the Clintons. As first noted on the Weekly Standard (and highlighted on the Drudge Report), the anchor was listed as a “notable past member” for a 2007 conference he moderated at the Clinton Global Initiative.

Talking to Jake Tapper, Cooper assailed, “With all due respect to the Weekly Standard, this is total bunk.” He complained, “ There was a story in the Weekly Standard that I guess Drudge picked up on...  which said that I'm basically in the tank for Hillary Clinton.”

ANDERSON COOPER: Nearly ten years ago, in 2007 I was asked to moderate a panel discussion at Clinton Global Initiative. Honestly, I can't even remember what the panel was. There were no Clintons on the panel. I think it was on, like, international development aid or, honestly, I have no memory of what it was.

Earlier this year, it was revealed that ABC anchor George Stephanopoulos donated $75,000 to the Clinton Global Initiative.

A transcript of the exchange on the October 13 edition of The Lead is below: 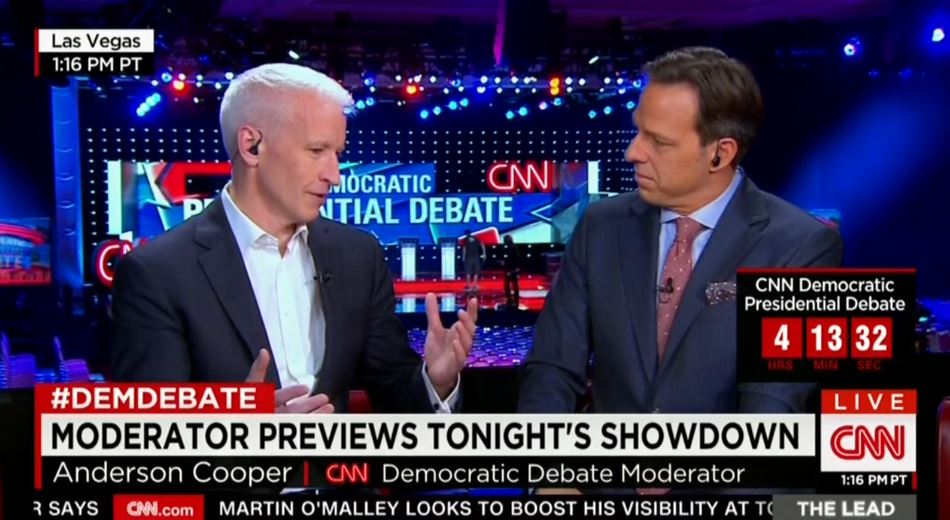 JAKE TAPPER: Now, in this hyper media world, there's always shots and everybody's trying to work the refs. I saw something online about you played some role at Clinton Global Initiative.

TAPPER: People claiming this is a conflict of interest. Can you explain?

COOPER: Yeah. I mean, with all due respect to the Weekly Standard, this is total bunk. There was a story in the Weekly Standard that I guess Drudge picked up on and —  which said that I'm basically in the tank for Hillary Clinton because, nearly ten years ago, in 2007 I was asked to moderate a panel discussion at the Clinton Global Initiative. Honestly, I can't even remember what the panel was. There were no Clintons on the panel. I think it was on, like, international development aid or, honestly, I have no memory of what it was. But I was the panelist. I was the moderator of a panel of handful of people. I walked in, I did my moderation, I left, I wasn't paid. I've never been back to the Clinton Global Initiative. I've never a member of CGI. I’ve never been to a cocktail party for CGI. I’ve never been to a social event with the Clintons. You know, the only time I've ever been in the same room with any of them is if I'm interviewing one them.

COOPER: And I don't think I've been able to get Hillary Clinton on my show for I can't tell you for how long. So, I think it was years ago last time I was able to interview. So, other than on a debate stage, this will be the first time. So, the idea that, you know, I just find it, you know, it —

TAPPER: It obviously bothers you because you work hard to be an objective journalist and when someone says something like this it's annoying.

COOPER: It does. We’ve all been working very hard on making this an aggressive debate as possible, as interesting a debate as possible and as fair a debate as possible for our viewers to get the — to get the information that they need. So, you know, look I get the story. Frankly, it's nothing new. It's been floating out there. You know, my friend Greta Van Susteren and a whole lot of reporters were also at one time or another guests moderators on various panels in the Clinton Global Initiative.

TAPPER: Which was a far less controversial organization back in 2007.

COOPER: Which, by the way, I should also point out I spoke at Reagan Library for free at the request of Nancy Reagan several years ago. No one seems to be attacking me as being a --

COOPER: [Laughs] That raises all sorts of questions.

TAPPER: Those tapes were not erased by me.