ABC on Sunday and Monday hid the damaging details of its own poll, minimizing Hillary Clinton's plunging popularity. Instead, World News and Good Morning America shifted the focus to Donald Trump and his continued surge. Clinton's "dramatic" fall appeared only on ABCNews.com. It was left to competitors CBS This Morning and NBC’s Today to probe the numbers.

With an on-screen graphic crediting ABC, CBS This Morning co-host Charlie Rose explained, “Only 42 percent of Democrats in the national poll are backing her now. In July, 63 percent said they wanted her to be the party's nominee.” He added that “a majority of Americans disapprove of the way Clinton has handled the e-mail controversy.”

On NBC’s Today, Sheinelle Jones referenced ABC's results and announced that the network’s survey “shows [Clinton's] support among Democrats nationwide dropping 21 points since July when the story broke about her e-mails.” 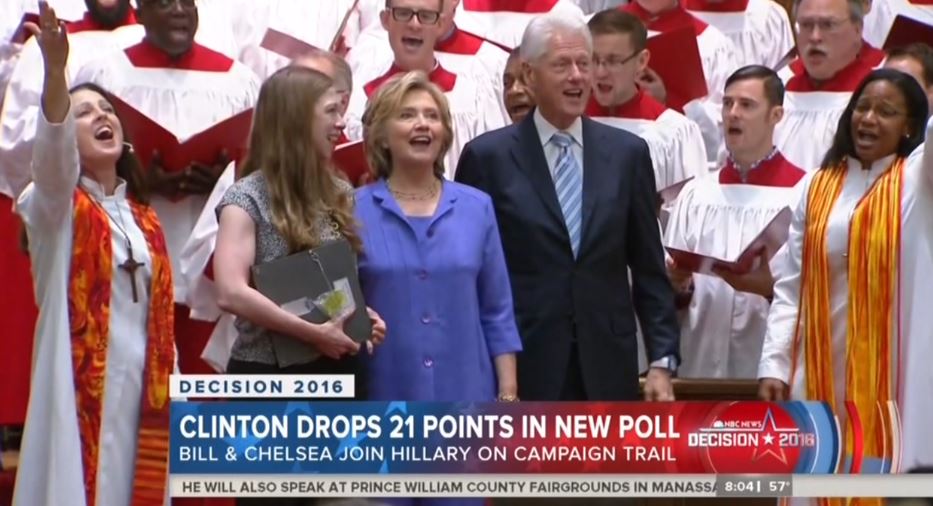 Good Morning America’s Stephanopoulos did allow that Clinton is “dropping fast,” but there was no mention of the 20 point plunge.

Instead, he trumpeted, “Ready for battle. Billionaire Donald Trump in camouflage, launches attacks on his opponents as a new poll numbers show him surging to his highest numbers yet.” On Sunday's World News, reporter Mary Bruce did a little better,

MARY BRUCE: [ABC News and] the Washington Post now reporting Clinton's private e-mail server may not have been wiped clean, adding yet another wrinkle to the controversy that continues to dog the Democratic frontrunner. All this as Clinton is now running neck-and-neck with Donald Trump. In a new ABC News/Washington Post poll, the candidates separated by just three points in a general election match-up. 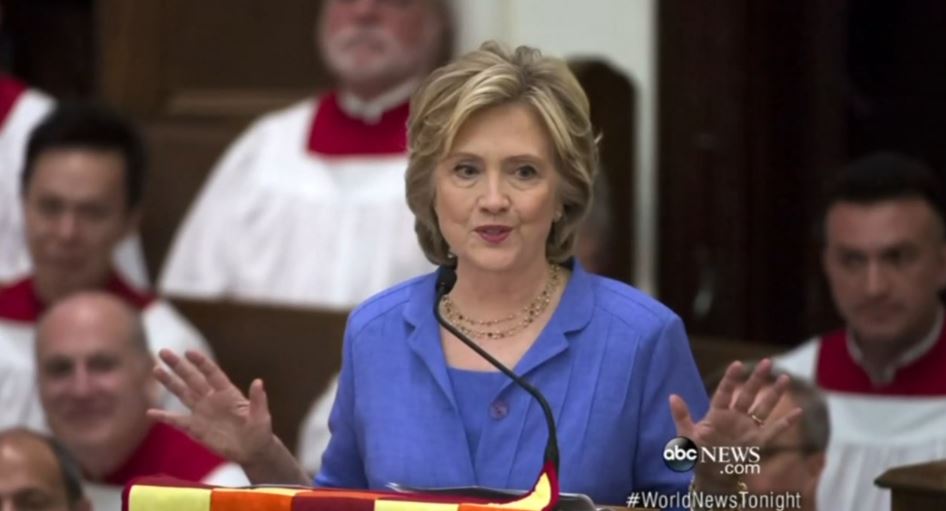 But she also kept the focus on Trump’s numbers, asserting, “Trump's blunt, what-you see-is-what-you-get style, continuing to catapult him ahead of the Republican pack.”

The specifics of Clinton’s free fall were relegated to the website. ABCNews.com writer Gary Langer managed:

In the Democratic contest, Clinton's drop is dramatic, yet not enough to threaten her clear lead. She's supported by 42 percent of Democrats and Democratic-leaning independents who are registered to vote, down from 63 percent in July, while Sanders has gained 10 points, to 24 percent, and Joe Biden's up by 9 points, to 21 percent. If Biden doesn't run, most of his support moves to Clinton, boosting her to 56 percent – exactly double Sanders' support in this case.

A transcript of the September 14 GMA segment is below:

GEORGE STEPHANOPOULOS: Ready for battle. Billionaire Donald Trump in camouflage, launches attacks on his opponents as a new poll numbers show him surging to his highest numbers yet. Just days before they face off in the new Republican debate.

STEPHANOPOULOS: The race for president now. Your voice, your vote. And our brand-new ABC News/Washington Post poll shows a surge for Donald Trump and Ben Carson, dominating the Republican side. Hillary Clinton dropping fast. Now neck and neck in a match up with Trump and just two days before the big debate. ABC’s Tom Llamas tracking it all. Tom?

TOM LLAMAS: George, good morning to you. That’s right. We're just two days away from the next big Republican debate. And our new poll out this morning shows Trump and Carson’s highest numbers yet in any national poll this cycle. You can see right there, Trump, 33 percent. Carson, 20 percent. But look at Jeb Bush, now slipping into single digits for the first time in any ABC News/Washington Post poll this cycle. This morning, Donald Trump is stronger than ever in the polls. And in Iowa over the weekend, with the new camouflage hat, but keeping the same tough talk strategy and saying he would hire ruthless negotiators in elected.

TRUMP: Here's the headline. Carly is surging. She's got three percent. I hear Ben, he's surging. But he's way behind me. I don't think Ben has the energy.

LLAMAS: But Doctor Ben Carson on This Week trying not the take the bait.

BEN CARSON: That doesn’t bother me because I recognize I have plenty of energy.

LLAMAS: Either way, voters are listening to the anti-politicians in the race. Trump and Carson with more than 50 percent  of the combined vote in the latest ABC News/Washington Post poll. A sliding Jeb Bush is trying to show voters he's the real conservative super hero, opening his white button down to show a vintage Reagan/Bush ‘84 campaign shirt, a reminder, he says, of what leadership looks like. Now, this week, before all the candidates are busy, today, Donald Trump is in the home of the Dallas Mavericks. 20,000 seats completely sold out. George, get this, some people are scalping tickets to a presidential political speech. George?