It didn't take long for The View's new co-hosts to start slamming Christians and conservatives. On the season premiere, Tuesday, Michelle Collins mocked the appearance of Kim Davis, the Kentucky clerk jailed for refusing to issue gay marriage licenses. The recently-added host sneered that Davis is "my top candidate for 'this bitch got a man?'"

Calling out the woman for her multiple marriages, Collins snarled, "Have you seen the lady?... I'm serious. She's a monster. " This prompted gasps from the audience. Bitch? Monster? Seems more than a little anti-woman to attack Davis for her looks.

Surprisingly, it was returning co-host Joy Behar who disagreed, saying, "She looks fine." Although Behar thought Davis should be punished, the host argued, "There should be an alternative between not doing a job and going to jail. I think that's a little bit much." 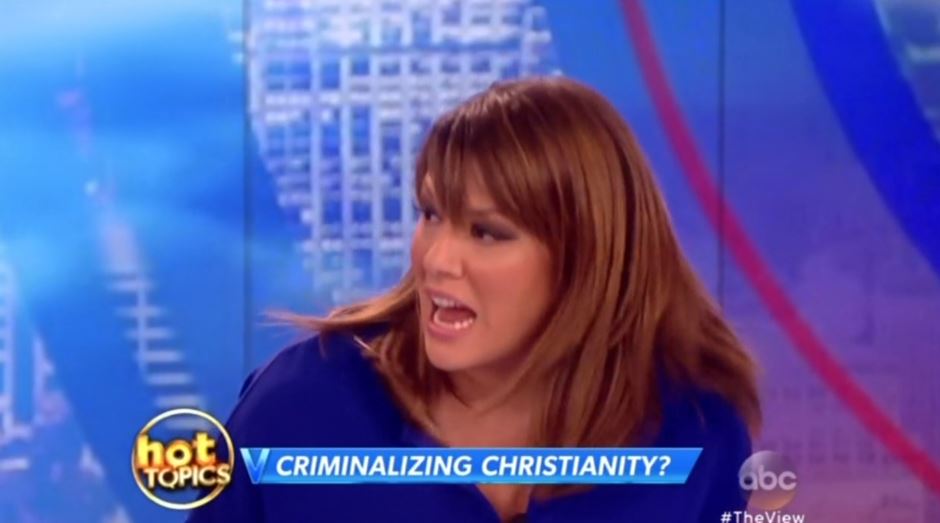 However, later in the program, when Collins wondered how the Pope would feel about Davis, Behar blurted, "My dream is that all the gay priests come out of the closet."

Another new host, Paula Faris, perhaps will play the Elisabeth Hasselbeck token conservative role. She wondered about hypocrisy from the left when it comes to Davis. Faris cited,

Faris is an ABC News anchor and outspoken Christian. A partial transcript is below: 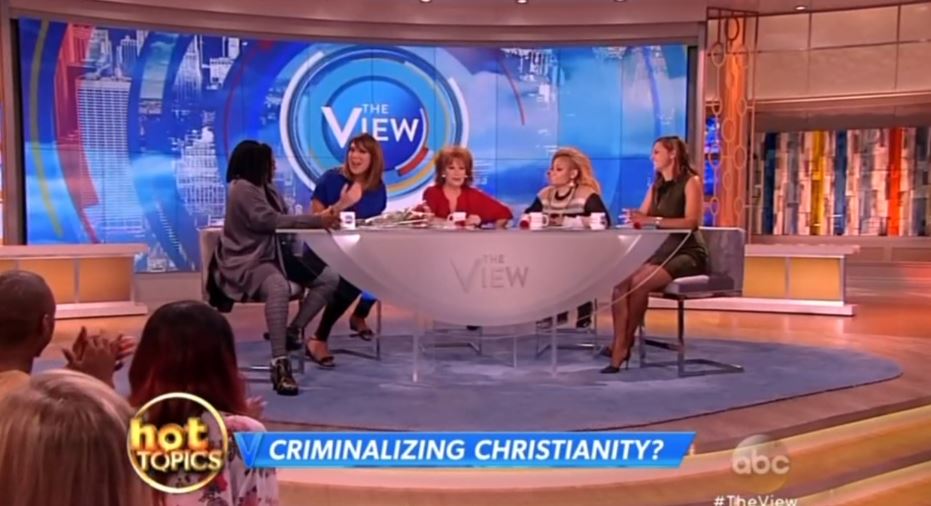 WHOOPI GOLDBERG: So the Kentucky clerk who was arrested for refusing to issue marriage licenses to gay couples, now, there's a rally to support her today. Candidate Mike Huckabee plans to attend and visit her in jail. So, the question is, is she -- is her religious freedom being violated or is she violating people's civil rights? I mean, what's happening here?

JOY BEHAR: The main thing is she works for the state, right?

BEHAR: Then you have to follow the law. I mean it's one thing to say I'm not going to deliver pizzas. It's another thing to shut down on your job. The supreme court said it's legal now. She can't do that. But there should be – Excuse me. Let me finish. There should be an alternative between not doing a job and going to jail. I think that's a little bit much.

GOLDBERG: In the '50s, when folks were getting arrested and for protesting not being able to sit in the front of the bus or sit at the table in a restaurant. You know, people said, well, we're not going to acknowledge you as a human being because it's against what I believe. So, either we are a country of laws and you adhere to those laws or you take a different job where you don't -- where your religious beliefs do not have anything to do with anybody else's freedoms.

BEHAR: You know, Whoopi, on top of all that, this is a woman who has been married more times than anyone at this table combined.

MICHELLE COLLINS: Four times. She's my top candidate for "this bitch got a man," by the way. I'm like, four times? Have you seen the lady? [Gasps from the crowd.] I mean – Sorry. I'm serious. She's a monster. I'm sorry. Go on.

BEHAR: She's fine. She looks fine. But she has been married four times. She had twins ow of wedlock. I don't judge this. I don't give a damn what people do. I'm laissez-faire, but to be so hypocritical you're so against gay marriage when you have had four marriages. I mean, a lot of the things they say, it will condemn, it will hurt heterosexual marriage.

COLLINS: They threw a big parade for him.

FARIS: There is a double standard. Why is she in jail?

FARIS: But he wasn't thrown in jail.