George Stephanopoulos Hammers Trump: Are You a Real Conservative?

Good Morning America's George Stephanopoulos on Wednesday hammered Donald Trump over whether he was a real conservative. Citing attacks from Jeb Bush, the co-host demanded, "... You heard Jeb Bush yesterday. 'You're not a conservative. You're more Democrat than Republican.' This is all personal. Is he drawing blood?"

This was Trump's third appearance on GMA in the last month. Each time, Stephanopoulos has grilled the candidate on conservative orthodoxy. The questions are an odd fit as both Trump and Stephanopoulos have donated large sums of money to the Clintons. Highlighting a new attack ad from Bush, the journalist quizzed, "[Bush] also shows you praising Hillary Clinton in the video. Bottom line, who would be the better president: Jeb Bush or Hillary Clinton?"

Stephanopoulos continued: "In the video it says -- showed you answering questions saying you have no idea why you're Republican.So, how would you answer that today? Why are you a Republican?"

On August 5, the host reminded, "... In the past you've had a lot of positions that seem to be aligned with the Democrats on health care, pro-choice on abortion." Stephanopoulos pointed out that Trump previously called himself "quite liberal." 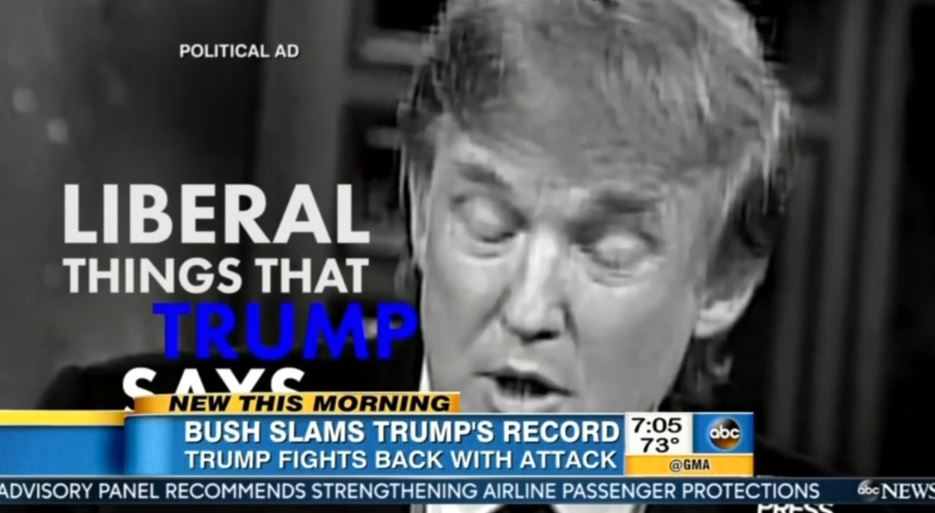 On August 7, the host focused on Trump's refusal to support the Republican nominee in 2016:

GEORGE STEPHANOPOULOS: A lot of Republicans seem most bothered by your refusal to pledge your support to the nominee, if it's not you. And you've said it depends on how the party treats you. So, what I want to know if you are not the nominee what would the Republican Party, what would the nominee have to do to convince you not to run as an independent?

A transcript of the September 2 GMA segment, which aired at 7:07am ET, follows:

GEORGE STEPHANOPOULOS: This is just the beginning. Okay, Jon, thanks very much. To Donald Trump right now. Still holding pretty commanding lead in the Republican polls, national polls and Iowa. Mr. Trump, thanks for joining us this morning. Boy, you heard Jeb Bush yesterday. You're not a conservative. You're more Democrat than Republican. This is all personal. Is he drawing blood? 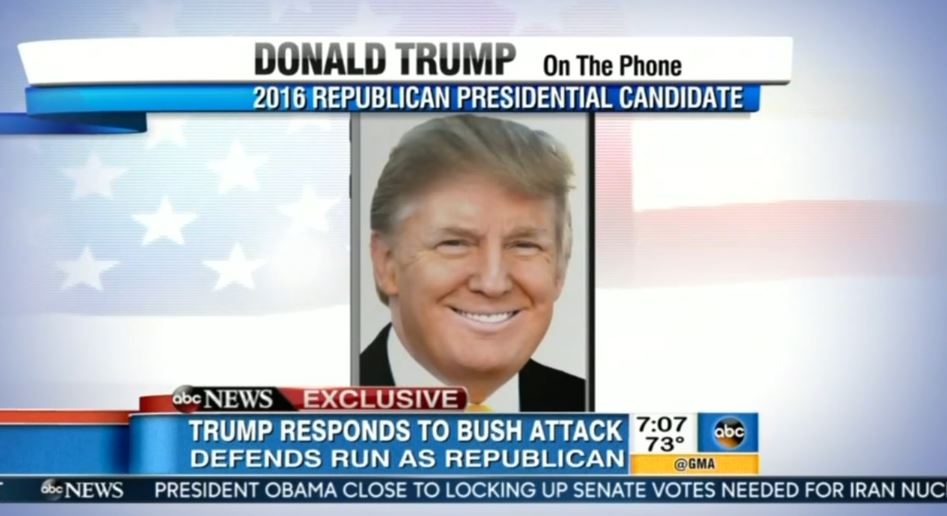 DONALD TRUMP: Well, I think he had really no choice. He's doing very poorly in the polls. He's a very low energy kind of guy and he had to do something. So they're spending a lot of money on ads and, you know, he has a lot of money from the hedge fund guys from the special interests from lobbyists. He raised over $100 million. So they control him totally so he really had no choice, I think, George. He had to go out with an ad. He did a very expensive ad and, you know, let's see what happens. So far, everybody that's attacked me has gone down.

STEPHANOPOULOS: He also shows you praising Hillary Clinton in the video. Bottom line, who would be the better president: Jeb Bush or Hillary Clinton? 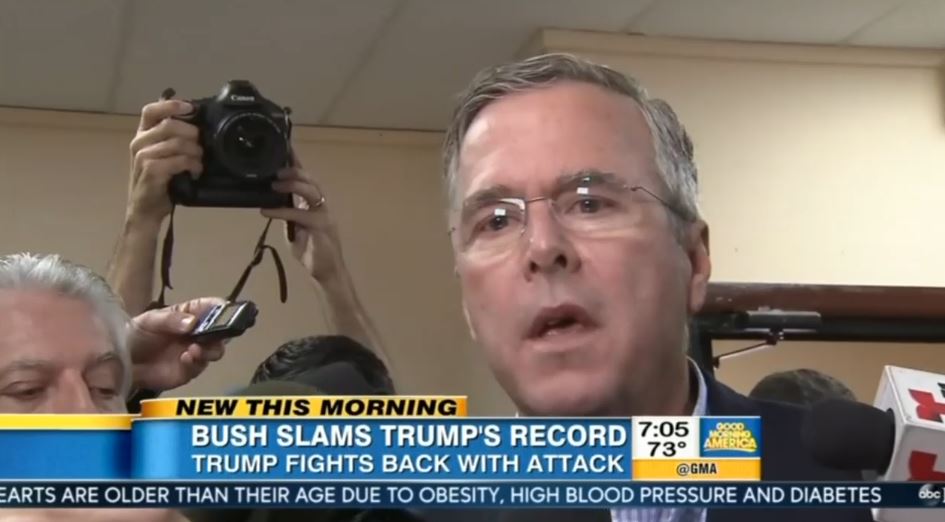 TRUMP: Well, I go with the Republican. Hillary was absolutely a horrendous secretary of state, probably the worst ever and I would have to go, really, with the Republican. You know, I was obviously very friendly, I was a major business person, obviously. You've seen that and I really was very friendly with all politicians. If I'm in New York, I was friendly with politicians throughout the United States. I was friendly -- that was my obligation. That was my job to do as what they just -- they turn to me, a world class businessman, and that's what I was. So, I had to get along with  everybody. So, I got along with the Clintons. I got along with everybody and it was important to do so. But now, you know, you look at Jeb and you see what he's doing and it's sort of an interesting thing and I think he probably had no choice. It's probably now going to now stop because it seems to be backfiring on him based on the polls. It seems to be somewhat backfiring on Jeb.

STEPHANOPOULOS: In the video it says -- showed you answering questions saying you have no idea why you're Republican. So, how would you answer that today? Why are you a Republican?

STEPHANOPOULOS: But right now you say you are a Republican. You are going to go with the Republican nominee. We just heard you say that about Jeb Bush. What about Ben Carson? One poll shows him tied with you right now in Iowa. Others have you ahead still comfortably. What do you make of the threat posed by Ben Carson in Iowa?

TRUMP: Well, I like Ben a lot. He's a good guy but he's been spending a tremendous amount of advertising money in Iowa and the one poll where we have a tie and the other one I'm leading by quite a bit in Iowa. But one of them came out and a little bit surprisingly there was a tie and I think that's great. But Ben is spending money in Iowa and I'm not. I am out in Iowa quite a bit. I've made speeches, quite a few of them and had a tremendous response and tremendous audiences. But Ben is spending a lot of money in Iowa.

STEPHANOPOULOS: You said you want to prohibit American companies like Ford from building plants in Mexico. You have complained about China eating our lunch. So will you disassociate yourself from every company or partnership of yours that creates jobs in China or Mexico?

STEPHANOPOULOS: But yes or no, will you dissociate from any companies or partners of yours that do business in China or Mexico?

TRUMP: No, I wouldn't do that. I want to do business with China and Mexico. I'm a free trader. The problem with free trade is you have to have smart leaders on our side. We do not have smart leaders. We do not have good negotiators. Everything we negotiate is bad, including the Iran deal. That deal is one of the worst negotiated transactions I've ever witnessed in my entire life. It's negotiated by people that are either stupid, incompetent. There's something wrong with them. It's a deal that's absolutely insane. So, we have bad negotiators on that. We have bad negotiators on trade. If I win we're going to turn it around and bring jobs back to this country and have a lot of victory instead of always losing.

STEPHANOPOULOS: Always opinionated Donald Trump. Thank you for joining us.