ABC Has No Time for Rubio or Walker, Again Makes Debate All Trump

Despite having two debates featuring 17 Republican candidates the day before, Good Morning America on Friday only found time for Donald Trump. For the second time in three days, the ABC News program highlighted the former reality TV star turned candidate, minimizing all the other contenders. NBC's Today featured Trump as well as Rubio. CBS This Morning's anchors talked to Scott Walker and John Kasich.

Former Bill Clinton operative George Stephanopoulos made the debate all about the businessman, trumpeting, "Donald Trump center stage, taking off the gloves and taking aim at his GOP rivals." Focusing on the superficial, he asked Trump: "You tweeted that Megyn Kelly and her fellow moderators were not professional. Are you worried they drew blood?"

So far this week, Trump has been given two interviews totaling eight minutes and 48 seconds. In comparison, Walker and Rand Paul have not been interviewed on GMA all year.

During the segment, in a Larry King-esque manner, Stephanopoulos wondered, "Anyone not impress you last night?" 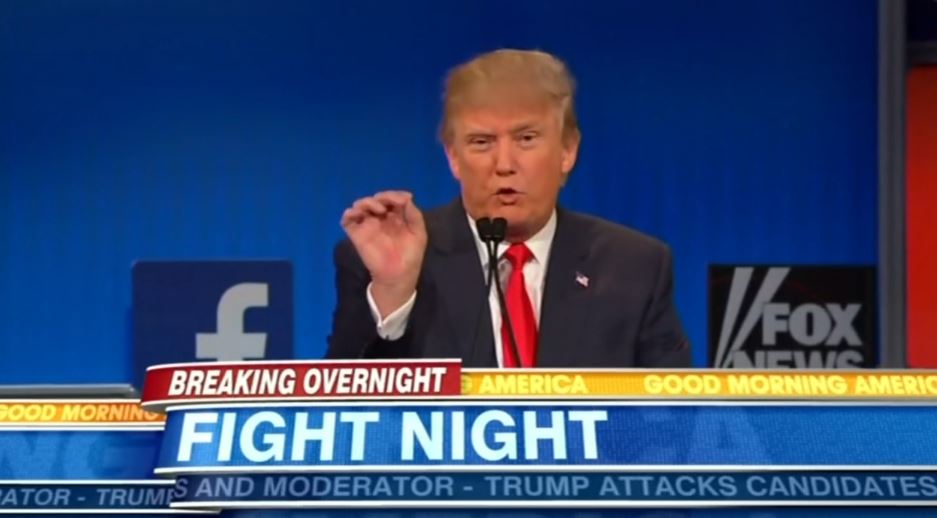 However, the anchor managed to press Trump on his long history of liberal positions: "You did get pressed hard on a lot of things, including your past support for single payer health care, your past positions. You used to say you were pro-choice. Now you say you're pro-life."

Regarding the real estate executive's threat to run third party, the co-host queried:

On Wednesday, Stephanopoulos pointed out that the candidate opposed gun rights and "used to describe [himself] as socially quite liberal."

A transcript of the August 7 interview is below: 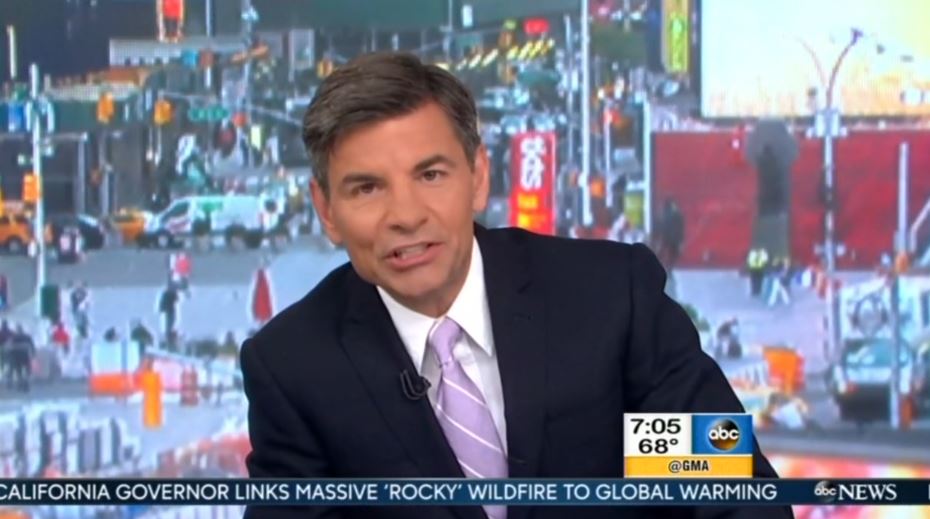 GEORGE STEPHANOPOULOS: Let's get right to the to the man of the moment, Donald Trump joins us now by phone. Mr. Trump, thank you for joining us this morning. I'm looking at the New York Times right here. It says Trump steals the show. But we just heard you say the questions were unfair and overnight, you tweeted that Megyn Kelly and her fellow moderators were not professional. Are you worried they drew blood?

DONALD TRUMP: Well, look, number one, I had a great time. I guess it got, probably, record ratings. I wonder what they would have been if I wasn't in the mix. It would have been very interesting to see, frankly. But I had a great time. Some of the candidates I got to know. I never met. I didn't know and they were really great people. I really had a wonderful evening, but the questions asked of me were much, much more difficult and poignant and really unfair than other people were asked but that weigh okay. I guess that's part of the game when you're number one in the poll, I guess that's what happens. 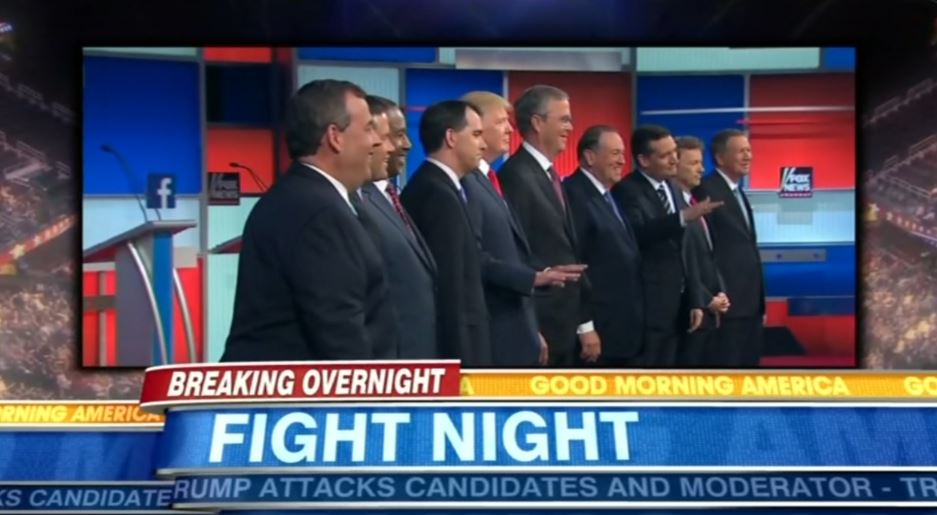 STEPHANOPOULOS: Yeah, the others got tough questions, as well. But a lot of Republicans seem most bothered by your refusal to pledge your support to the nominee, if it's not you. And you've said it depends on how the party treats you. So, what I want to know if you are not the nominee, what would the Republican Party, what would the nominee have to do to convince you not to run as an independent?

TRUMP: Well, if I respect the nominee, which is very important to me. Again, I'm not really a politician, I mean, I'm running the opposite because --

STEPHANOPOULOS: Yeah, you are a politician now, aren't you?

STEPHANOPOULOS: Did you see anyone else up there on the stage last night who you could support?

TRUMP: Oh, absolutely. I don't want to mention names now but there were numerous people. I have a lot of respect for a lot of the people up on the stage.

STEPHANOPOULOS: Anyone not impress you last night?

TRUMP: I don't want to get into that either but I must tell you I really got to know some of the people last night. That was a pretty heated deal. I guess they said it would be record stuff, record type of ratings and it was a very heated evening and you sort of are in the trenches with people and, George, it was -- it was a fascinating night and I really did get to like some of the candidates.

STEPHANOPOULOS: It was a fascinating night for all. You did get pressed hard on a lot of things, including your past support for single payer health care, your past positions. You used to say you were pro-choice. Now you say you're pro-life. Did you learn anything from those questions? Do you think you're going to have to change anything as we head into the next debate?

TRUMP: Well, I evolved. I mean, Ronald Reagan was a Democrat. He became a Republican. He was sort of a liberal Democrat actually and, you know, you evolve and things happen and I'm pro-life and other things that we talk about. I actually discussed single payer and I said why it no longer would work and could have worked years ago but it won't work now and we talked about that. And I think I gave full answers on that. We discussed all things. But, you know, you grow and you evolve and that's what happens with me and that's what happens with most people on that stage.

STEPHANOPOULOS: You know, before we go what was unfair about Megyn Kelly's questions?

STEPHANOPOULOS: So, you take them back, if you did say them?

TRUMP: She came up with words that I didn't recognize. So we'll see what happens. We're take a serious look at it but when I said the Rosie O'Donnell thing that got the biggest -- I would say the biggest laugh, applause, et cetera, of the evening. I mean, that was a pretty startling noise in that arena. So, look, it was an amazing evening. I'm not complaining about anything. I think that -- I think I did very well. You know, Drudge had me as number one and Time magazine had me as number one and The New York Times has she as number one.

STEPHANOPOULOS: Time magazine says they're still compiling results, but we will see how you did.

TRUMP: I think I'm way ahead, George, in all fairness.

TRUMP: Pretty hard when you have a 40 some odd percent of the vote. It's pretty hard to beat.

STEPHANOPOULOS: That may be. Will you be the front-runner in the next debate?

STEPHANOPOULOS: Will you still be the front-runner going into the next debate?

TRUMP: I would think so. : Some people, most people the real pro said that based on the performance last night my numbers should even go up. You know, I'm at 26 percent. We just had in South Carolina mid-30s, in North Carolina, mid-30s and Nevada we're doing great and won the Hispanic vote in Nevada, which is very interesting and I say I'm going to win the Hispanic vote. But, I won the Hispanic vote. We had incredible numbers in Georgia, in the mid-30s.

STEPHANOPOULOS: We will be --

TRUMP: We are doing pretty well.

STEPHANOPOULOS: We will be watching. Thanks for joining us this morning.