All three networks on Wednesday hyped Barack Obama's final appearance on The Daily Show, but it was CBS that offered the most nostalgic, sentimental coverage. This Morning reporter Vladimir Duthiers reminisced, "Like two old friends just enjoying each other's company, Tuesday night, Jon Stewart and President Obama both reflected on the approaching conclusion of their careers."

The correspondent hyped a clip of Obama gushing to the Democrat-friendly Stewart: "I'm issuing a new executive order that Jon Stewart cannot leave the show." CBS co-host Gayle King was amused and played along: "This morning President Obama has a plan to make Jon Stewart stay put."

In April, Duthiers spun reported on the attacks against Stewart's replacement, Tervor Noah. Critics had accused the comic of being anti-Semitic. Duthiers spun the incoming host as simply "pulling no punches." 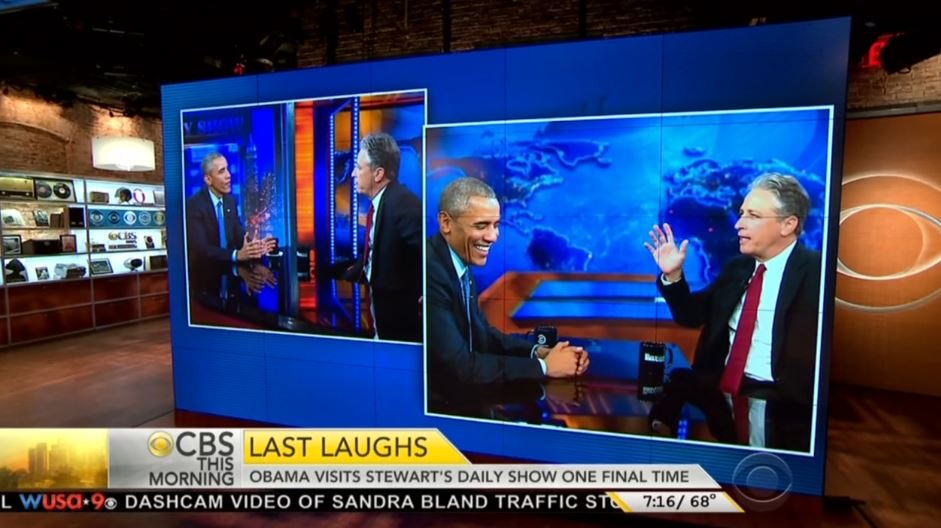 BARACK OBAMA: I'm sure the Republicans are enjoying Mr. Trump's current dominance of their primary.

JON STEWART: Anything that makes them look less crazy.

A transcript of the July 22 CBS This Morning segment is below: 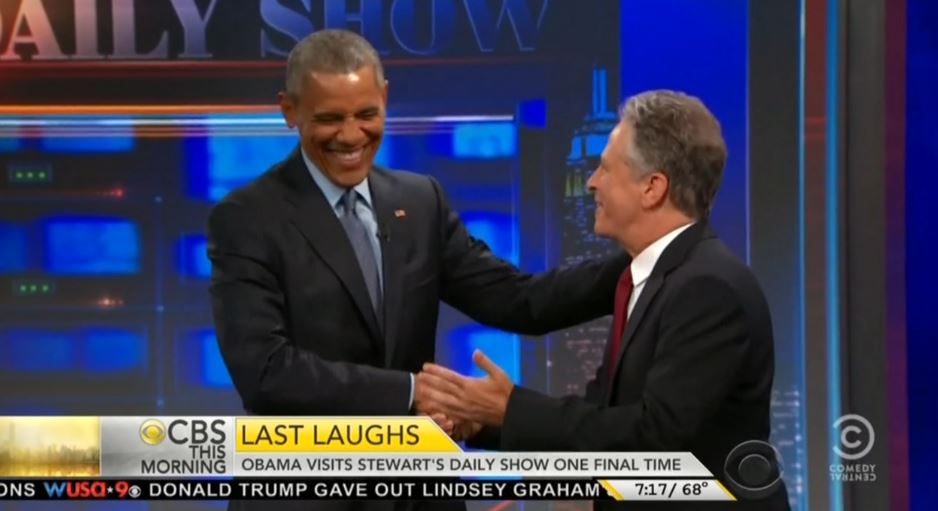 GAYLE KING: This morning President Obama has a plan to make Jon Stewart stay put. The president made his seventh and final appearance with the comedian on the Comedy Central show last night. Stewart as you know is retiring next month after more than 16 years as host. Vladimir Duthiers of our digital network CBSN is outside the Daily Show studio here in New York. Vlad, good morning.

VLADIMIR DUTHIERS: Tuesday night's interview was unusually low key, but the president did find a way to take some playful jabs at some familiar targets.

DUTHIERS: Like two old friends just enjoying each other's company, Tuesday night Jon Stewart and President Obama both reflected on the approaching conclusion of their careers.

BARACK OBAMA: I can't believe that you're leaving before me. In fact, I'm issuing a new executive order that Jon Stewart cannot leave the show.

DUTHIERS: Obama trumpeted his achievements on health care and hit back against critics of the Iranian nuclear deal.

OBAMA: They fall back on, well, if you had beat your chest a little bit more –

STEWART: If you had just done it in 2011, they’d give you the country.

OBAMA: Or if you had brought Dick Cheney into the negotiations.

STEWART: Let's not get crazy.

OBAMA: Everything would be fine.

STEWART: So we’re fighting with Iraqis to defeat ISIS along with Iran.

STEWART: But in Yemen, we're fighting Iran with Iraqis and Saudis.

OBAMA: That's not quite right, but that's okay.

DUTHIERS: But even with only a year and half left in office, the president insisted there's still work to be done
.
OBAMA: There are a bunch of other things we want to get done. Some of them we got started early. Climate change is a good example.

STEWART: A lot of people look at you as kinda the new vanguard.

DUTHIERS: It was nearly ten years ago that then-Senator Obama appeared Stewart’s nightly talk show. His subsequent guest spots over the past decade spanned is major political career.

OBAMA: Eventually the political system responds, despite the money, despite the lobbyists, it still responds.

STEWART: Is that the advice you then bequeath to future President Trump?

OBAMA: Well, I'm sure the Republicans are enjoying Mr. Trump's current dominance of their primary.

STEWART: Anything that makes them look less crazy.

DUTHIERS Despite the president's proposed executive action to keep Jon Stewart around, he'll vacate his anchor chair in this studio on August 6th to make way for Trevor Noah who begins at the end of September. Norah?

NORAH O’DONNELL: Alright Vlad thank you. Wow, what the end of an era.

KING: Yeah they seem to enjoy each other, the back and forth between the two of them. It’s nice.