Just weeks after calling President Trump scarier than the characters in his novels, horror writer and outspoken liberal Stephen King has turned his fire at Senate Majority Leader Mitch McConnell. Responding to one of McConnell’s tweets addressing the tragic mass shooting in El Paso, King declared: “This is on you. You should be charged as an accomplice in these deaths.” 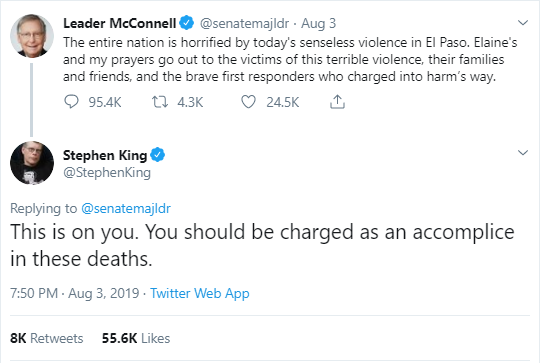 King’s response was a remarkable contrast to McConnell’s tweet, which talked about how “the entire nation is horrified by today’s senseless violence in El Paso. Elaine’s and my prayers go out to the victims of this terrible violence, their families and friends, and the brave first responders who rushed into harm’s way.” King directed another rancorous message to McConnell on his Twitter account using the hashtag #MoscowMitch, likely reacting to the aforementioned tweet: “Shove your thoughts and prayers far up where the sun don’t shine and the air is smelly.”

King’s anti-McConnell tweets serve as just the latest example of the horror writer using his platform to trash Republicans and President Trump. Last year, a train carrying Republican lawmakers to a retreat in West Virginia hit a garbage truck, “killing one person and injuring many others.” Rather than expressing his thoughts and prayers or simply staying silent, King took to Twitter, describing the train accident as “karma.”

Back in 2013, King wrote a 25-page essay called “Guns,” where he argued that “one only wishes Wayne LaPierre and his NRA board of directors could be drafted to some of these (violent) scenes, where they would be required to put on booties and rubber gloves and help clean up the blood, the brains, and the chunks of intestine still containing the poor wads of half-digested food that were some innocent bystander’s last meal.”

King also used his essay to mock Second Amendment supporters, claiming that “gun advocates cling to their semi-automatics the way Amy Winehouse and Michael Jackson clung to the shit that was killing them.”