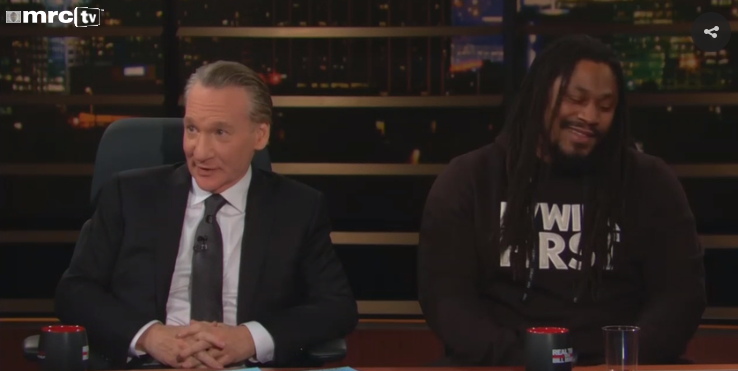 After a two month-long hiatus, Real Time With Bill Maher returned to the airwaves Friday. This episode was true to form when it comes to Trump-bashing, with the eponymous host calling President Trump a “dangerous menace” and a “terrorist.”

Maher weighed in on the government shutdown. According to Maher, “Trump was very mad that he didn’t get his, you know, Lego wall set for Christmas.” Maher expressed his wish that “Democrats don’t cave” and argued that their position should be “Trump is holding this country hostage, you don’t deal with terrorists,” effectively comparing the President of the United States to a terrorist.

At the beginning of the show, Maher interviewed John Kasich; the former Republican Governor of Ohio who now works as a CNN Contributor.

Maher repeatedly tried to get Kasich, an outspoken Trump critic, to call the President a “dangerous menace.” Kasich refused to comply with Maher’s request but he did agree with Maher that “he’s doing some things that I think are dangerous.” Kasich repeatedly talked about how he did not endorse or vote for President Trump, in addition to talking about a “common sense gun control bill” that he tried and failed to pass during his tenure as Ohio Governor.

After hearing him talk about his unsuccessful attempt to pass gun control, Maher declared “And that is why I think you should run for President.” Kasich jokingly asked him “will you run my campaign?” Maher replied, “I will not run your campaign.” Maher implied that he wanted Kasich to run as a spoiler candidate in the 2020 Presidential Election:

I’m going to encourage you because I think you could do an incredible service to your country but you have to know you are going to lose because if you, if somebody like you and Mitt Romney ran, you would siphon away enough votes, there would be the Trump people and then the classic Republicans and we would elect anybody but Donald Trump; which is the best thing a patriot can do for this country, don’t you think?

Kasich responded to Maher’s request by declaring that he would not run unless he thought he could win. The interview concluded with Maher telling Kasich, “good luck with your campaign.” While 2020 buzz has surrounded Kasich for quite some time, the former Ohio Governor has never committed to fulfilling the media’s wildest dreams by either challenging President Trump in the Republican Primary or running as an independent.

While only one episode of Real Time has aired in the new year, it looks like Bill Maher will offer more of the same outlandish anti-Trump remarks in 2019 that caused him to make headlines on Newsbusters in 2018.

A transcript of the relevant portion of Friday’s edition of Real Time is below. Click “expand” to read more.

BILL MAHER: Do you see Donald Trump as a dangerous menace to America?

JOHN KASICH: Well, I’m very concerned about a couple things. First of all, I didn’t…

MAHER: Do you see Donald Trump as a dangerous…

KASICH: Can I just answer the question?

MAHER: I feel like you are just avoiding the question.

MAHER: Oh, come on. Is he a dangerous menace?

KASICH: I’m going to tell you…

KASICH: He’s doing some things that I think are dangerous, and one of the biggest ones is retreating from our involvement in the world. And all this friction and I worry about what happens when we have so much friction. Look, look. I didn’t, I didn’t go to the convention that was in my state, I didn’t endorse him, I didn’t vote for him, I’ve stood for two years arguing that his…

KASICH: That’s how we get in trouble, when you call names…

KASICH: When they want to call you a name I say, no, I like Bill Maher, don’t call him a name. Okay?

MAHER: But they want to disband the FBI.

MAHER: Isn’t that a menace when you want to disband the FBI? I mean…

KASICH: I believe that it’s wrong.

MAHER: When George Bush the First was President, remember? He quit the NRA because they said in a fund-raising letter, they called the ATF…

MAHER: …and he said that’s a bridge too far. That’s just words on a paper, this man is talking about disbanding the Federal Bureau of Investigation.

KASICH: I’m…Bill, I’m worried about him eroding these basic institutions, the one thing we do know in our country is these institutions will, will outlast him or anybody else.

MAHER: We hope. We don’t know that.

KASICH: The press, the press…

MAHER: We don’t know that.

KASICH: And one of them was a red flag law. If you know somebody in the workplace or in your family who poses a danger, you can go to a court and their guns can be taken from them. I couldn’t pass that. And you want to know what’s going on? If I could put 10,000 people on the lawn of the State House, I would’ve gotten that done but we had one voice from the gun people who said no way, no how, we’re not going to do it and they pressured the legislators and I couldn’t get people to show up to stand up to say we need some common sense gun control. I’m for the Second Amendment but my goodness, there’s so many things that we can do to reform it and to put us in a position where we are safer.

MAHER: And this is why I think you should run for President. You’re a Republican. I’m not

KASICH: Will you run my campaign?

MAHER: I will not run your campaign.

KASICH: Okay, well, everybody wants me to run, what are you going to do for me?

MAHER: No because…I’m going to encourage you because I think you could do an incredible service to your country but you have to know you are going to lose because if you, if somebody like you and Mitt Romney ran, you would siphon away enough votes, there would be the Trump people and then the classic Republicans and we would elect anybody but Donald Trump; which is the best thing a patriot can do for this country, don’t you think?  Without calling names. What do you think?

KASICH: I told you I didn’t vote for him and the bottom line is if I can run, have an impact and win, I’m not going to run to just go and woon somebody…I don’t want to do that. I don’t ever get into anything where I don’t think I can win, so we sit back and we watch all these things. And what’s happening today, well, what’s happening in this five minutes, it changes so much in the next five minutes, we’re just watching. We will see.

MAHER: All right, good luck with your campaign.

MAHER:  Let’s talk about the government shutdown, let’s get everybody in on this because if you haven’t followed it, I guess people…we’ve been off for a couple of months, sometimes people don’t follow the news but it is a big pissing match. And it looks like Nancy Pelosi, like you said, is winning this one. Trump was very mad that he didn’t get his, you know, Lego wall set for Christmas. And I just hope that the Democrats don’t cave because obviously people are hurting like we didn’t realize and the longer this goes on, the more they hurt, the more pressure is going to be on to get some kind of a deal. To me, I think the Democrats’ position should be Trump is holding this country hostage, you don’t deal with terrorists.