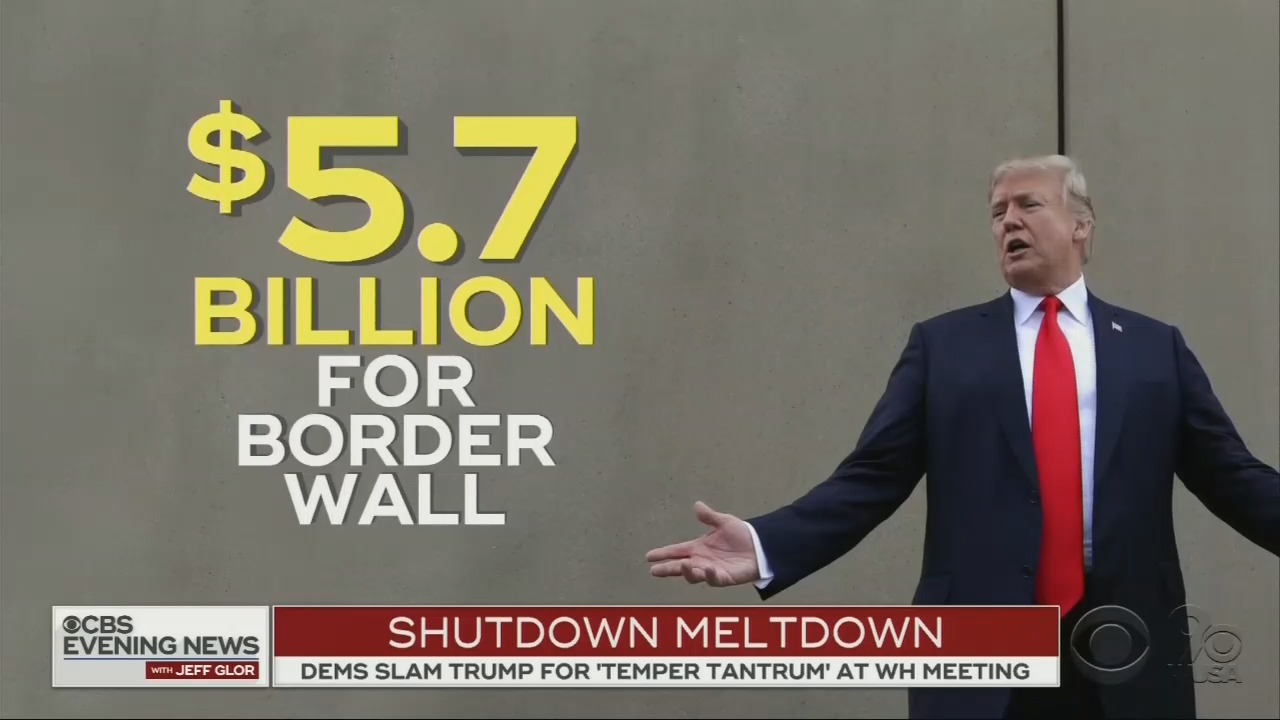 In just 35 days, the partial government shutdown generated nearly five hours of coverage on the ABC, CBS and NBC evening newscasts, eclipsing all other political topics. By a six-to-one margin, network reporters framed the shutdown as the fault of President Trump and Republicans, not Speaker Pelosi and the Democrats, even though the media’s own polls found the public was much more balanced in its view of who was responsible.

And the central issue of the shutdown, the need for greater border security, was given relatively little attention: Out of 297 minutes of total shutdown coverage, just 27% (80 minutes) was devoted to the debate over the border wall — far less time than was given to TSA workers calling in sick, delays at airports and the personal plight of government workers who had their paychecks delayed.

While the networks’ coverage of the shutdown was highly negative toward President Trump, it really wasn’t much more negative than has been the norm since Inauguration Day. The Media Research Center’s ongoing tracking of the Big Three evening newscasts found 93% of the evaluative statements about the President (excluding neutral statements) were negative in January — barely above the 92% percent we documented in December. For all of 2018, coverage of the Trump administration on these networks was 90% negative, the same level of hostility we tracked in 2017.

(Reminder, our study excludes the partisan back-and-forth, considering only statements from reporters, anchors or non-partisan sources such as experts or voters.) 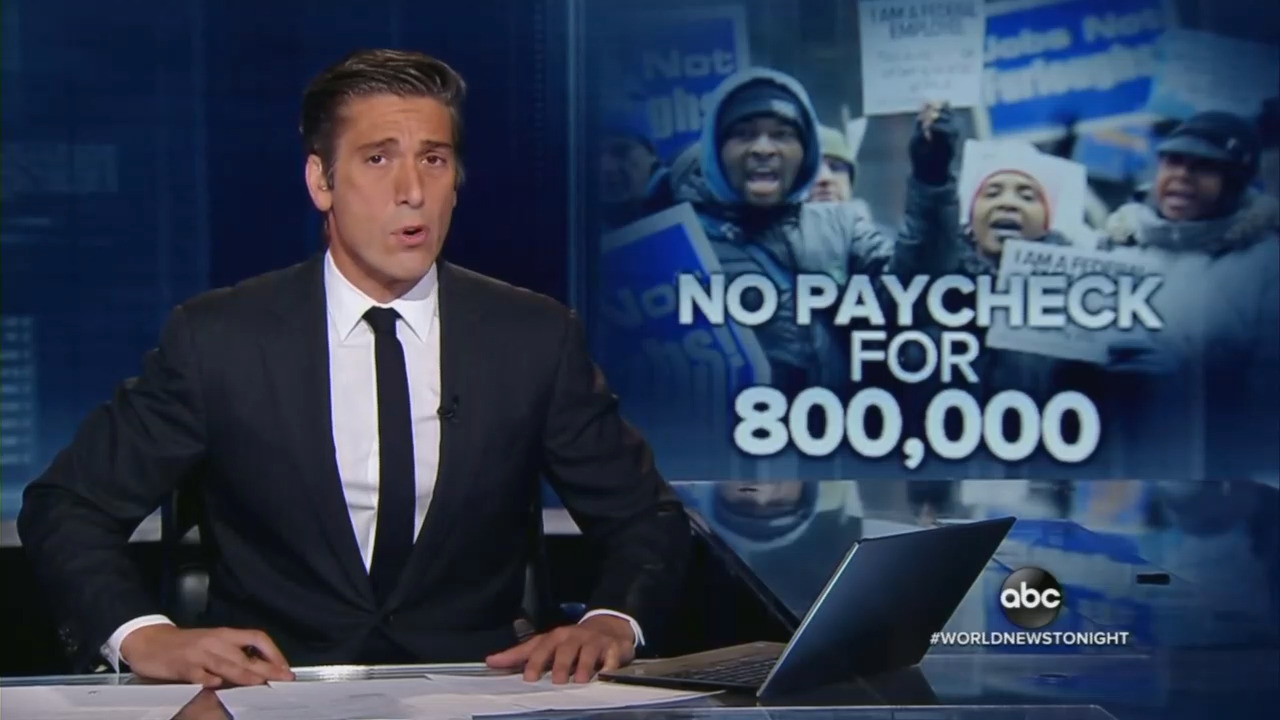 Most of TV’s shutdown coverage consisted of a parade of victims. As early as January 11, ABC was touting workers at food pantries; one IRS worker told the network, “we don’t have any money and we don’t have much food.” On January 17, NBC’s Tom Costello spotlighted another IRS worker “selling her own plasma for $50 to support her family.” On January 23, CBS passed along the claim of a union boss that a worried IRS worker “told her she attempted suicide” because of the shutdown. The next day, ABC highlighted an employee of the Fish and Wildlife Service who said she was “rationing insulin” because she could not afford the $300 co-pay.

These horror stories, repeated night after night, typically followed coverage of the political back-and-forth which blamed President Trump’s demand for border security far more than the recalcitrant Democrats who were refusing to negotiate. Our analysts tallied 156 statements assigning blame to one side or the other, either for causing the shutdown or prolonging it: 133 targeted President Trump and/or Republicans, vs. just 23 targeting congressional Democrats — a six-to-one disparity.

But several polls taken in mid-January found between 29% and 36% of voters actually blamed Democrats (an average of 32%), while those blaming Trump and Republicans averaged 56% (ranging from 53% to 59%). That’s a far more balanced reaction than was evident in broadcast news coverage. 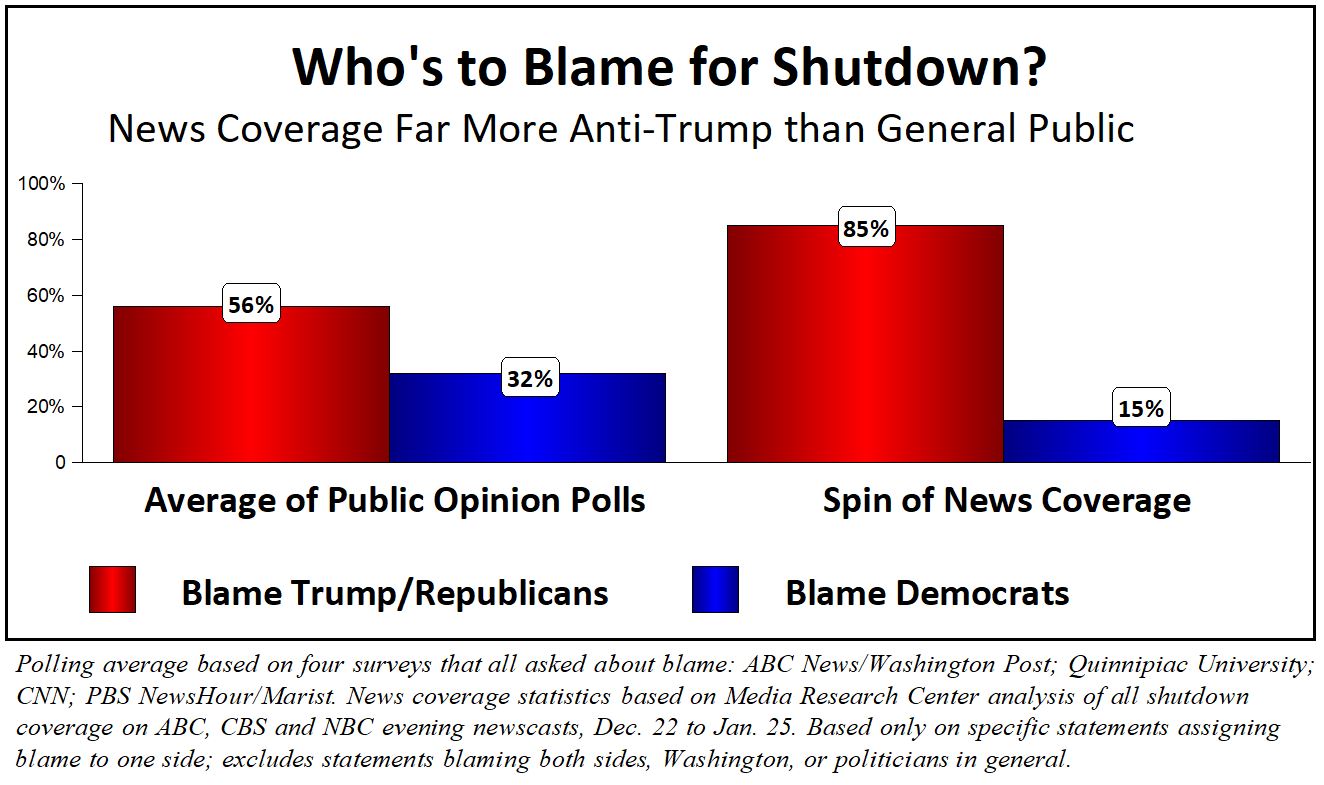 A few journalists actually dared to make the case against Democrats. The January 2 Nightly News, for example, showed a clip of Today co-host Savannah Guthrie confronting Pelosi in an interview that morning: “If you and the Democrats don’t meet halfway, if you don’t compromise, then why isn’t the shutdown partially your responsibility as well?” Pelosi retorted: “It has nothing to do with us.”

And on the January 7 CBS Evening News, correspondent Paula Reid let viewers know it was Democrats who were refusing to talk: “Democrats have not accepted the President’s invitation to return here to the White House to continue negotiations.” But the vast majority of reporter commentary cast Trump as the culprit: “digging in on his demands” (ABC, 12/31); “not budging” (ABC, 1/2); “pretty dug in” (NBC, 1/8); and “more dug in than ever” (NBC, 1/14).

In contrast, during the 2013 shutdown over ObamaCare, none of these networks blamed the Democratic President for being “dug in” in his demands for congressional funding for his signature project. Then, MRC analysts counted the overall spin of stories, not individual statements. We found 41 stories blaming Republicans, 17 blaming both sides, and none blaming President Obama or the Democrats.

When the shutdown ended on January 25, the networks quickly crowned Pelosi triumphant. ABC’s Terry Moran admired how she had gone “toe-to-toe with Trump and bested him at every turn,” while flatly declaring that “Trump caved.” None of the networks that night fretted about the lack of funding for effective border security.

The debate over the border will likely dominate the media coverage leading up to President Trump’s State of the Union address tomorrow night. Expect network reporters to warn the White House against another shutdown, while Democrats almost certainly won’t be pressured to deliver on the improved security they promised to consider once the government re-opened.

And expect network coverage of President Trump to be as hostile as ever, whether or not there’s another shutdown. As we’ve seen over the past two years, even though the topics constantly change, the media’s negativity toward this administration is unrelenting.