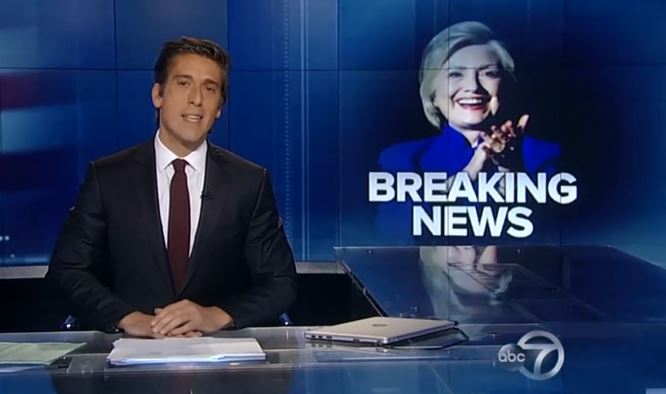 Voters who have relied on the network evening newscasts for information about the 2016 presidential candidates saw four times more airtime devoted to controversies involving presumptive GOP nominee Donald Trump than to the scandals surrounding his Democratic rival Hillary Clinton.

Indeed, the only Clinton scandal to receive more than a minimal amount of attention from the networks during the primaries was the ongoing investigation of Clinton’s use of a private e-mail server and her mishandling of classified information while serving as Secretary of State. The networks paid little or no attention to a host of other Clinton controversies that likely would have been big news if they had been associated with her GOP opponent.

MRC analysts reviewed all 1,099 stories on the ABC, CBS and NBC evening newscasts which talked about the presidential campaign between January 1 through June 7, including weekends. This tally includes 950 full reports and interview segments; 66 short items read by the anchor; plus 83 stories on other topics that included some discussion of one or more of the candidates.

The overall amount of campaign airtime is extraordinary: 2,137 minutes of coverage, or more than one-fourth (26.1%) of all evening news airtime during this period, excluding commercials and teases.

Nearly half of that airtime (1,068 minutes) was spent talking about Donald Trump, the presumptive GOP nominee, compared to 583 minutes of coverage for Hillary Clinton. Clinton’s rival for the Democratic nomination, Vermont socialist Bernie Sanders, came in third, with 366 minutes of coverage, more than any of Trump’s GOP rivals.

Compared to Clinton, a much higher percentage of Trump’s airtime (40 percent, or 432 minutes) was spent discussing the controversies surrounding the Republican’s candidacy. Only 18 percent of Clinton’s coverage (105 minutes) was spent discussing similar controversies, as network reporters paid scant attention to stories that would have garnered far more airtime had Trump been involved. 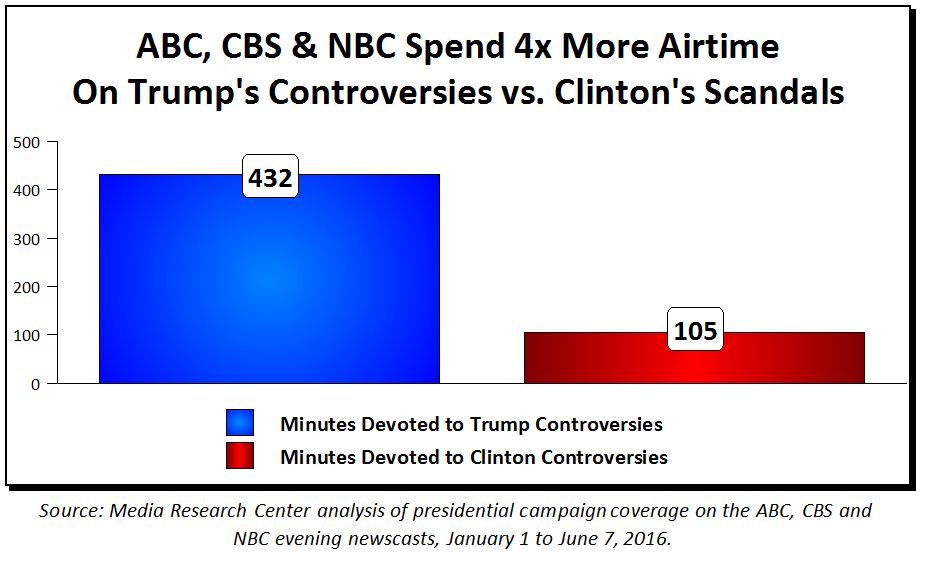 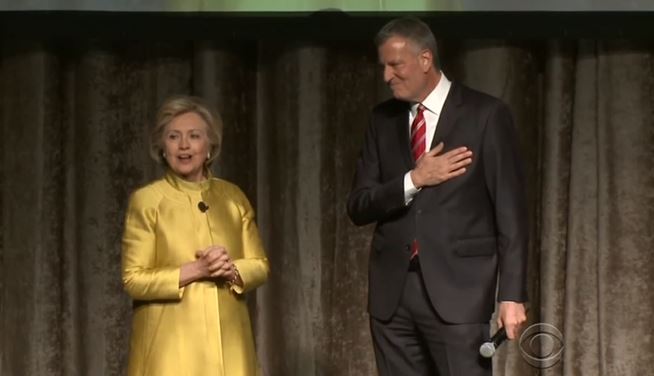 For example, the lingering questions about Clinton’s handling of the 2012 Benghazi attack drew only 77 seconds of evening news airtime from January 1 through June 7. Clinton’s participation in a racially-charged comedy skit with New York City Mayor Bill de Blasio (about running on CP time — “cautious politician time”) was skipped by ABC and NBC’s evening broadcasts, getting just 51 seconds of airtime on the April 12 edition of the CBS Evening News.

The potential conflict-of-interest scandal surrounding the Clinton Foundation and Clinton’s tenure as Secretary of State was given a paltry 44 seconds of coverage — half of which came when her socialist rival Bernie Sanders brought it up during the waning days of the Democratic primaries.

Neither ABC nor CBS mentioned Sanders complaint that night, nor did any follow up in the days that followed.

Clinton’s e-mail server scandal was the most-covered candidate controversy of the primary season, with more than 47 minutes of airtime. The only other Clinton controversy to crack the Top 20 was discussion of Bill Clinton’s past adultery and alleged mistreatment of women — a topic only covered because it was brought up by Trump.

And, most of the network coverage was framed not around the controversy of Clinton’s actual conduct, but the notion that Trump was going too far by raising the issue of the former President’s infidelity. On the May 19 Evening News, for example, CBS’s Nancy Cordes labeled it “harsh” of Trump to bring up the case of Juanita Broaddrick, who in 1999 accused Clinton of raping her in 1978. That same night, ABC’s David Muir said Trump was “proving nothing is off limits,” while NBC’s Andrea Mitchell accused Trump of engaging in “aggressive personal attacks.” 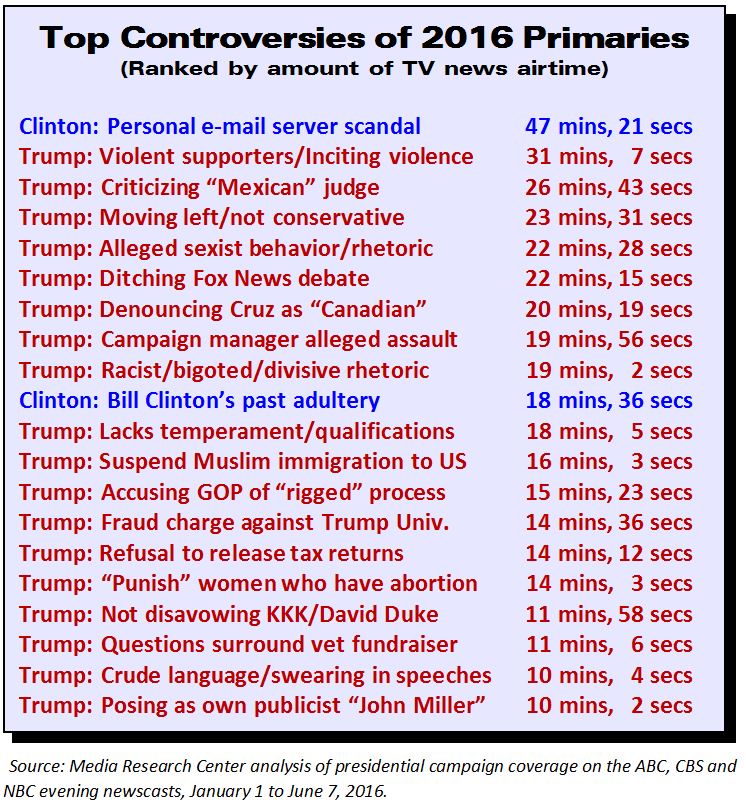 The other 18 controversies on the Top 20 list were all related to the GOP candidate: violence at some of Trump’s rallies (31 minutes); his racially-charged criticism of the judge in the Trump University fraud case (27 minutes); his history of liberal policy positions and shift to the left on some issues after his last GOP rival dropped out of the race (24 minutes); and history of sexist rhetoric and charges of crude behavior with women (22 minutes).

These are obviously valid topics for news coverage, but contrast the amount of network airtime Trump’s problems received with the same statistics for key controversies surrounding Hillary Clinton: her big money speeches to Wall Street banks, and her refusal to release transcripts of those speeches (7 minutes, 35 seconds); and her reliance on massive campaign contributions from the wealthy (6 minutes, 50 seconds).

When cameras caught Clinton angrily yelling at a Sanders supporter over the issue of contributions from those in the fossil fuel industry (“I am so sick of the Sanders campaign lying about me!”) the flap drew just 72 seconds of coverage on the NBC Nightly News, 40 seconds of coverage on ABC’s World News Tonight, and a mere 16 seconds on the CBS Evening News. 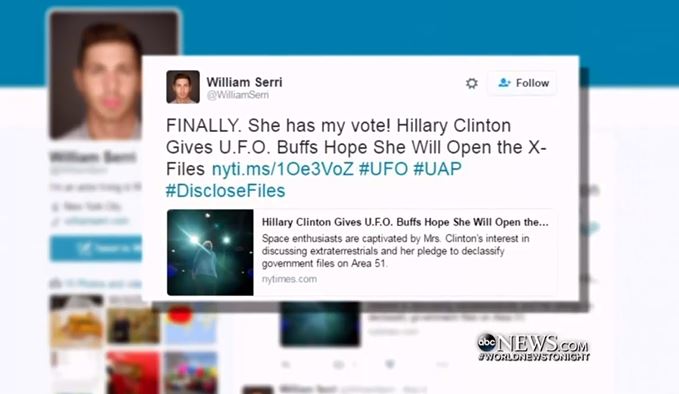 When in May Clinton suggested on a radio show that she believed in space aliens (“There are enough stories out there that I don’t think everybody is just sitting, you know, in their kitchen making them up”), only ABC’s World News Tonight bothered to tell viewers, with a light-hearted one minute, 43 second story on a Sunday night broadcast.

“Clinton’s enthusiasm is winning over one part of the electorate,” ABC correspondent David Wright wryly noted. “‘Finally,’ tweeted one sci-fi fan, ‘she has my vote!’”

If Donald Trump had suggested little green men had visited Earth, his comments likely would have been highlighted as evidence that the Republican candidate is unsuitable for the presidency.

The networks have left no stone unturned in their vetting of Trump. But this is a race between two candidates, and they have an equal obligation to report on the scandals, controversies and gaffes surrounding Hillary Clinton.