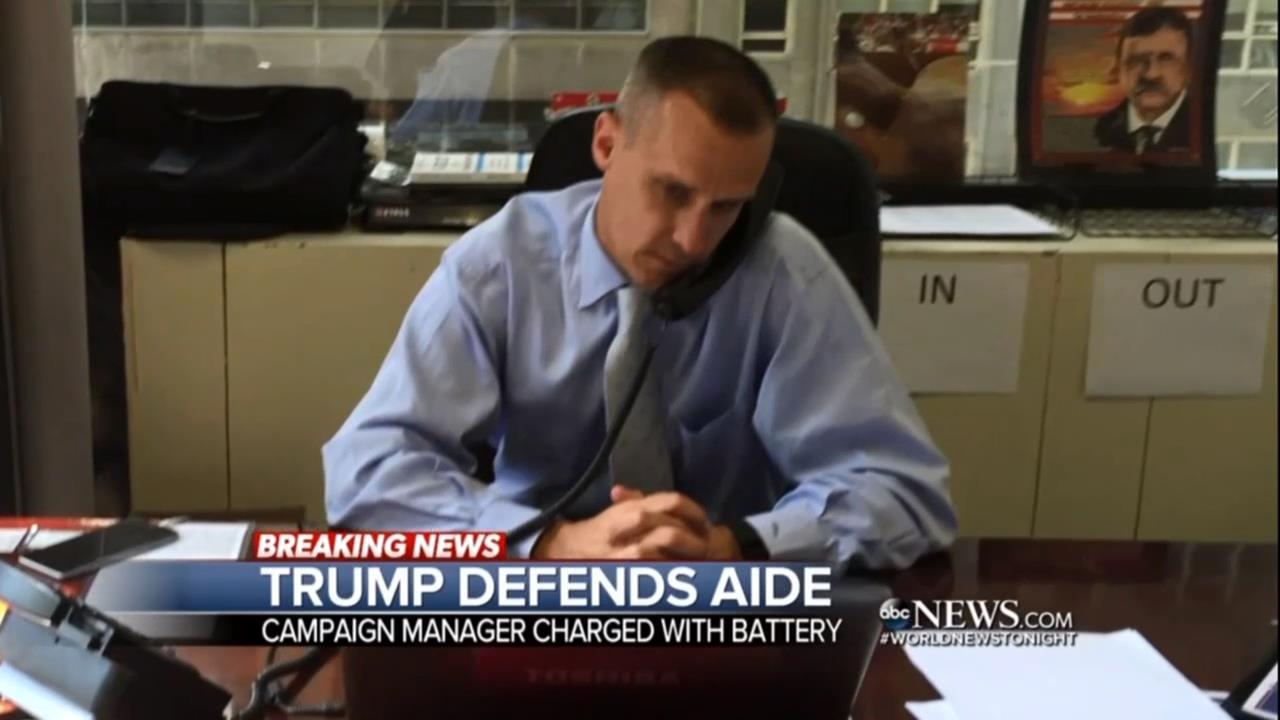 In just the last three weeks, ABC, CBS and NBC’s evening newscasts have generated nearly 16 minutes of coverage looking at charges of misconduct against Donald Trump’s campaign manager Corey Lewandowski. That’s more than eight times the coverage than they’ve given over the past eight months to serious questions surrounding top Clinton aide Huma Abedin for her role in a variety of Clinton scandals (less than two minutes).

The main charge against Lewandowski is that he grabbed a female reporter back on March 8, which resulted in a misdemeanor charge of battery on Tuesday. The networks have also focused on how he allegedly grabbed a protester by the collar at a rally later in March, and NBC on Tuesday night cited allegations Lewandowski had made uninvited verbal advances toward female journalists.

Add it all up, and the network evening newscasts generated 15 minutes, 43 seconds of coverage of Lewandowski from March 9 to March 29. And, of course, the charges against Lewandowski, a top aide to the frontrunner to the Republican presidential nomination, are serious and deserve coverage. 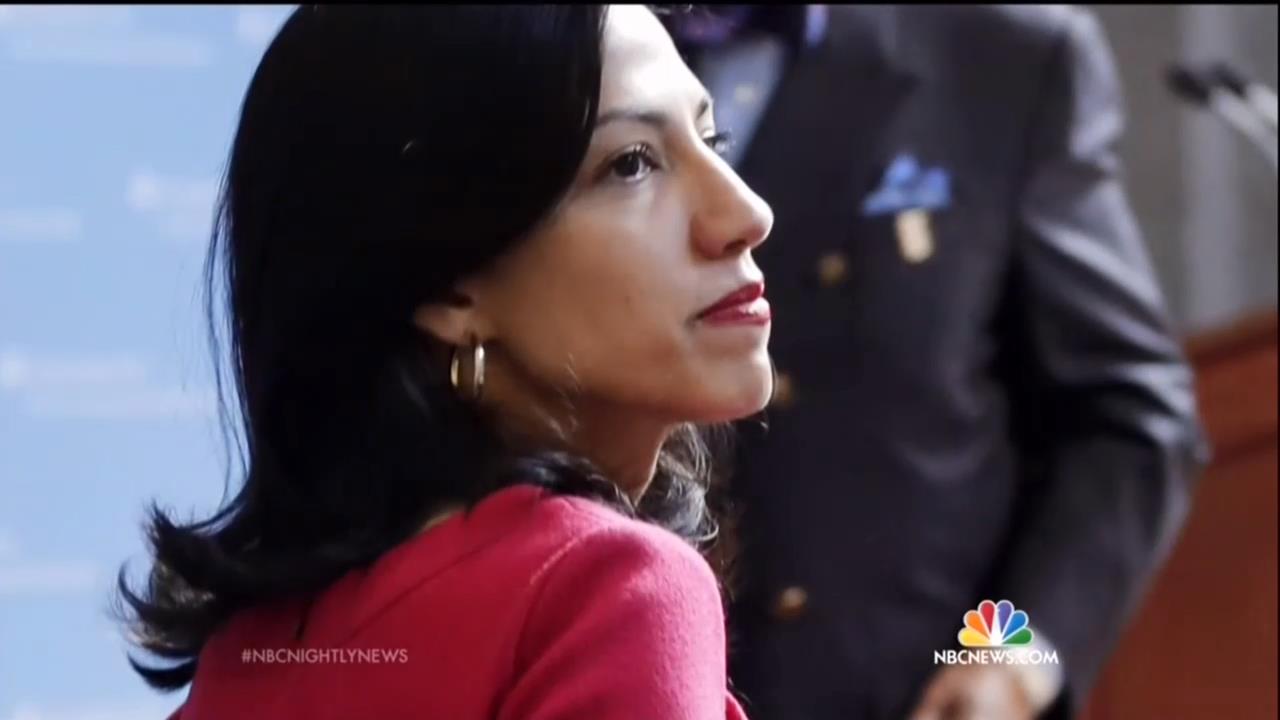 But these same networks are virtually ignoring the legal issues surrounding Huma Abedin, a top campaign aide to Democratic frontrunner Hillary Clinton. Abedin, who was also a top aide to Clinton when she served as Secretary of State, is at the center of the investigation into Clinton’s private e-mail server, the potential mishandling of classified information, and potential conflict of interest with the Clinton Foundation.

In 2012, Abedin simultaneously worked as a private contractor for both Hillary Clinton’s State Department and the Clinton Foundation, along with a Clinton-allied consulting firm. The conservative legal watchdog Judicial Watch filed a FOIA request to shed light on the unusual arrangement, and then re-filed the request in 2015 when it was discovered that Hillary Clinton had bypassed the State Department e-mail system.

This week, a federal judge overseeing the case ruled that Judicial Watch could interview Abedin and other top Clinton aides under oath; earlier, the Los Angeles Times reported that the FBI would be conducting similar interviews with Abedin and others. 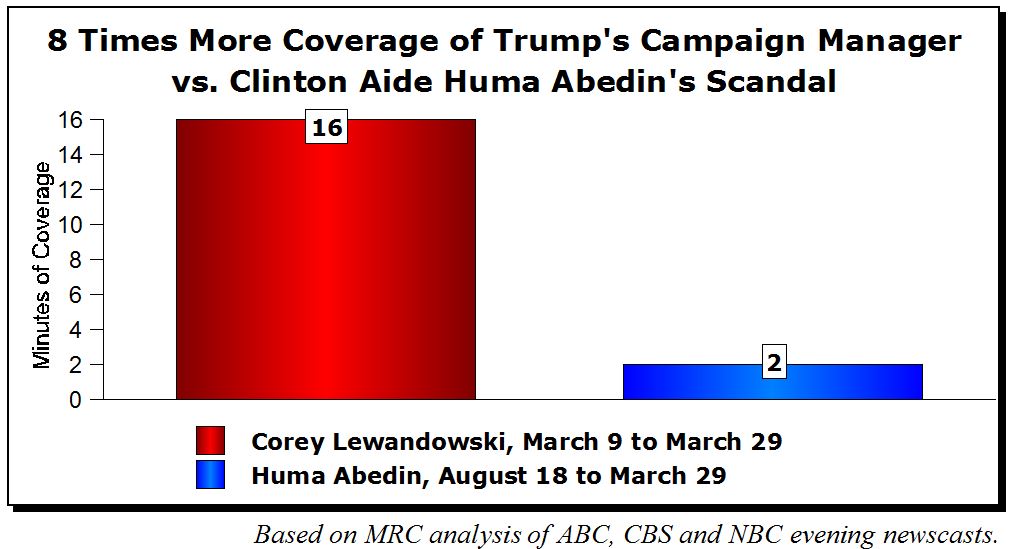 Despite the seriousness of the charges involving Abedin, the three networks have provided a grand total of only 107 seconds in the past eight months talking about her role in any of these Clinton scandals. That’s less than one-eighth the amount of coverage spent on Corey Lewandowski just this month, and slightly less than the 117 seconds of sympathetic coverage Abedin received when she and her husband, the former Congressman Anthony Weiner, were criticized by Trump in late August.

NBC’s Andrea Mitchell was so offended by Trump’s criticism, she raised the issue personally with Hillary Clinton during a September 4 interview shown on the Nightly News: “Donald Trump, among other things that he has done, has really personally attacked one of your closest aides, Huma Abedin. What was your feeling about that?”

Compared to how they’ve treated Lewandowski, the networks’ coverage of Abedin during this campaign is so minuscule, I’ve reproduced all of it below so you can see exactly how she’s been covered. In some cases, I’ve included more of the story for context; the portion in bold is what I deemed to have been focused on Abedin herself.

Correspondent PETE WILLIAMS: On Thursday, a federal judge holds a hearing on a lawsuit touching on the e-mail controversy involving Huma Abedin, a key Clinton campaign adviser constantly at the candidate’s side. She was also a top aide to Secretary Clinton at the State Department and had an account on the private e-mail server. A watchdog group that sued to get details of Abedin’s government contract has expanded its lawsuit, demanding a search of the Clinton e-mails for answers.
Judicial Watch’s CHRIS FARRELL: I think they are dragging their feet. I think that they are engaged in some form of gamesmanship, legal gamesmanship, and they’re being less than frank and forthcoming. [35 seconds] 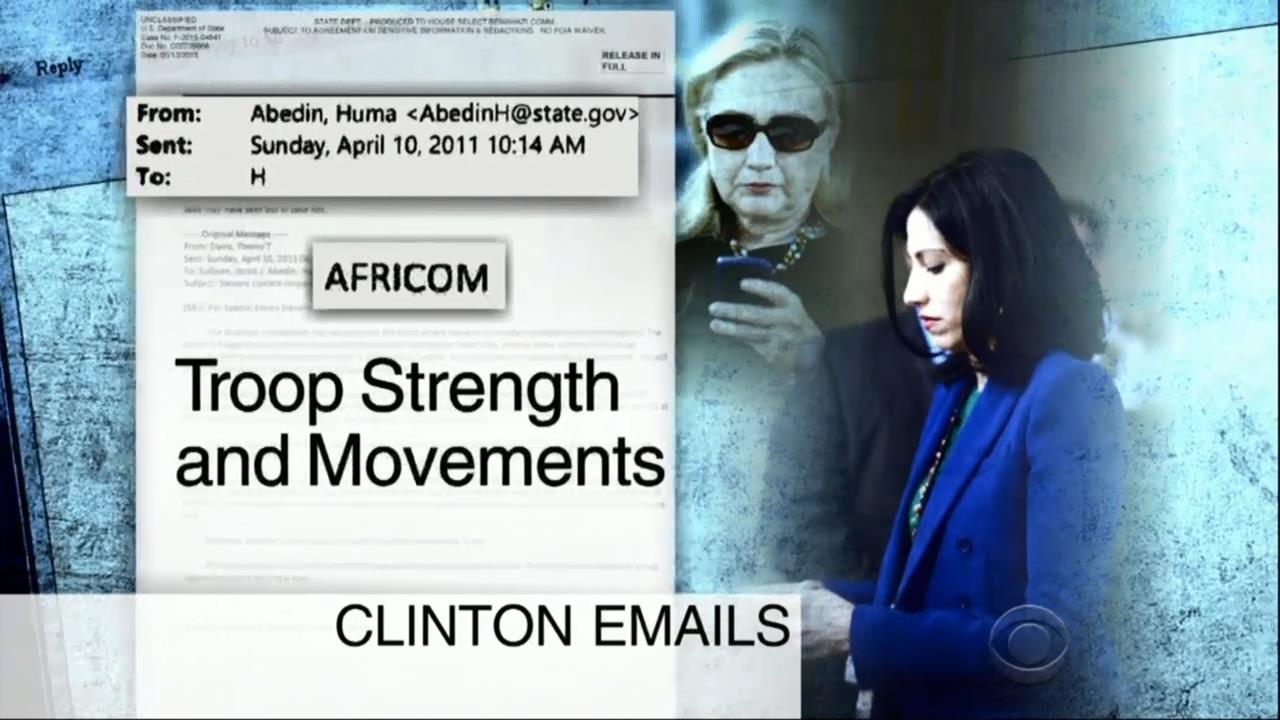 Correspondent JAN CRAWFORD: The two e-mails the intelligence community says contained classified information were uncovered during an investigation of the 2012 attack in Benghazi, Libya, that killed Ambassador Chris Stevens and three other Americans. The first e-mail, from April 2011, was forwarded to Clinton by aide Huma Abedin. It cited intelligence reports from the U.S. Africa Command on Libyan troop strength and movements. [12 seconds]

Correspondent PETE WILLIAMS: What’s the FBI investigating? Federal agents are looking at whether classified information was compromised. They got that assignment after intelligence officials said some e-mails publicly released from her private server contain classified information like this one sent to her in November of 2012 about possible arrests in Benghazi, redacted in part before it was released. Or this one sent by her close aide Huma Abedin on deteriorating conditions in Benghazi. Mrs. Clinton says she didn’t think any of those e-mails were classified. [5 seconds] 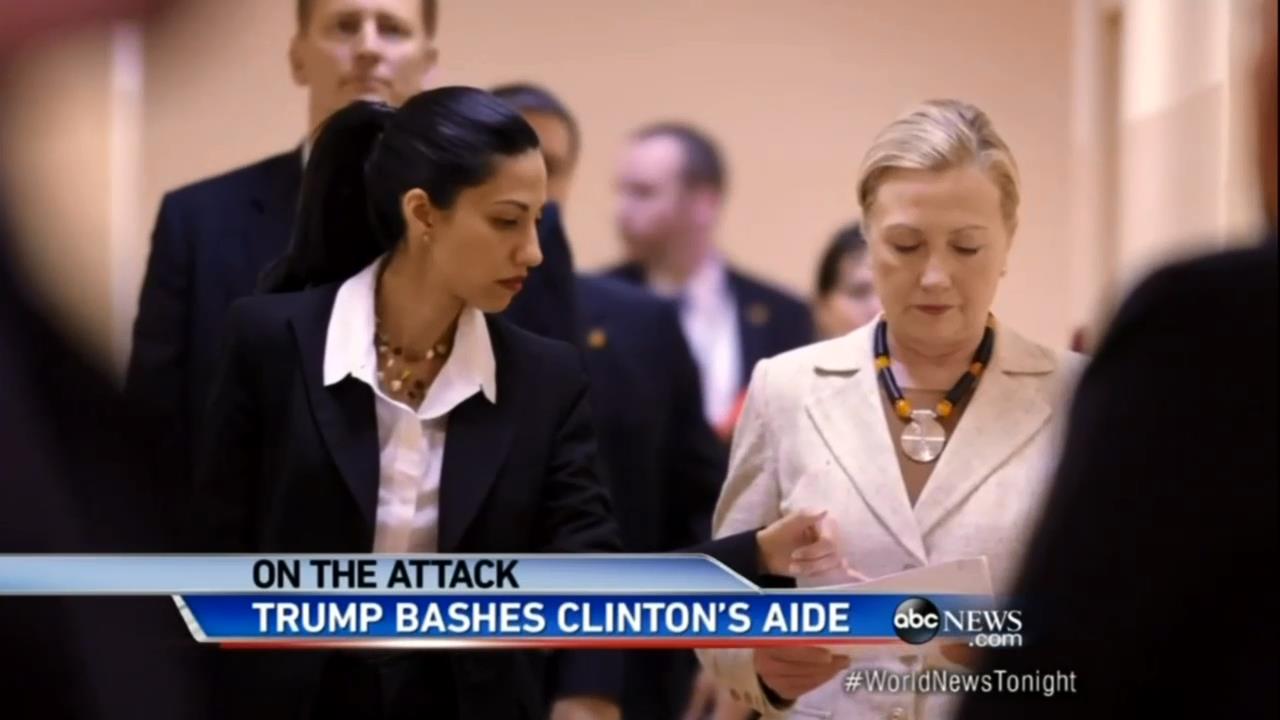 Correspondent KATY TUR: The billionaire’s Nashville appearance a far cry from last night’s rowdy event where Trump was cheered for taking aim at Hillary Clinton’s top adviser Huma Abedin, and her husband Anthony Weiner, who left Congress in the wake of a sex scandal.
Clip of DONALD TRUMP: So Huma is getting classified secrets. [edit wipe] She’s married to a bad guy. I’ve known Anthony Weiner for a long time. I knew before they caught him with the bing, bing, bing.
KATY TUR: The Clinton campaign firing back on Twitter calling his words disgraceful. [30 seconds total /4 seconds about scandal]

Correspondent JONATHAN KARL: Although none of the emails were marked classified at the time they were sent, it's more evidence that classified information may have been mishandled. This as Donald Trump has launched a harsh personal attack on Hillary Clinton's top aide, Huma Abedin.
Clip of DONALD TRUMP: So Huma is getting classified secrets. She's married to Anthony Weiner, who's a perv. He is. [edit jump] I think it's a very dangerous thing when she is the receiver of so much of this very important information and she's married to a guy who obviously is psychologically disturbed.
Correspondent JONATHAN KARL: Abedin's husband, Anthony Weiner, infamously resigned from Congress after tweeting inappropriate photos to young women. The Clinton campaign called Trump's attack disgraceful. [38 seconds total / 21 seconds about scandal]

Correspondent ANDREA MITCHELLL: Clinton says the private system was convenient but the e- mails show it was anything but. An exchange with close aide Huma Abedin reveals even the State Department helpdesk didn’t recognize Clinton’s private e-mail address. In August 2010 Abedin writes Clinton "They had no idea it was you, just some random address, so they e-mailed. Sorry about that." [22 seconds] 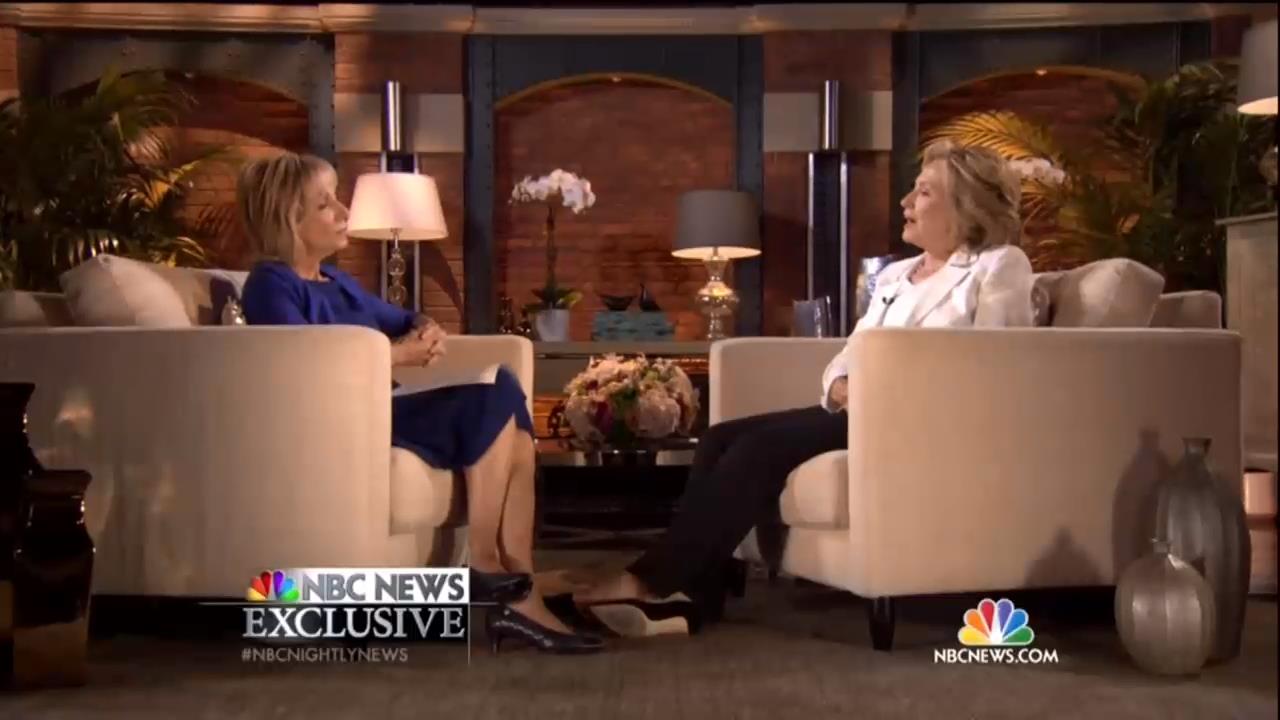 Correspondent ANDREA MITCHELL: And Donald Trump, among other things that he has done, has really personally attacked one of your closest aides, Huma Abedin. What was your feeling about that?
HILLARY CLINTON: Well, he’s attacked so many people, including my-- my close aide and myself, and many other people. I think it’s an unfortunate development in American politics that his campaign is all about who he’s against, whether it’s immigrants or women broadcasters or aides of other candidates. You know, he’s great at innuendo and conspiracy theories and really defaming people. That’s not what I want to do in my campaign and that’s not how I’m going to conduct myself. [31 seconds]

Anchor SCOTT PELLEY: One factor that [Vice President Joe] Biden is weighing is whether frontrunner Hillary Clinton has been seriously damaged by the controversy over her use of a private e-mail system while she was secretary of state. Today, her longtime aide Huma Abedin, testified behind closed doors to the House committee investigating the matter. [8 seconds]