In an already polarized political climate leading up to the convention season for the Democrats and Republicans, CBS This Morning threw the spotlight on a left wing activist group known as Color of Change. The “civil rights” organization is pressuring corporate sponsors of the RNC to pull out of sponsoring the Republican Convention.

JULIANNA GOLDMAN: Donald Trump's inflammatory comments have been a staple of his candidacy… And now that he's the presumptive Republican nominee, some corporate sponsors are distancing themselves from the Republican National Convention. Color of Change is a civil rights group trying to get sponsors to drop out.

RASHAD ROBINSON [Color of Change PAC Executive Director]: This moment is about corporations making a very clear decision about connecting their money and their resources to the type of hate that Donald Trump has been selling America.

Color of Change, tied to such movements like Black Lives Matter, is currently circulating an online petition to coerce corporations and other organizations from participating in the RNC convention. Parts of the petition from this activist groups feature heavily hyperbolic rhetoric meant to enforce their agenda of continuing racial strife:

How can companies like Google, who heavily market to and profit from Black people, fund a platform for a presidential nominee that is being bolstered into office by former Grand Wizard David Duke, the KKK, and other white supremacists?

These companies are stuck pretending that their sponsorship won't provide a platform for Trump’s dehumanizing hate speech. But when corporate dollars are used to fund a platform for a demagogue who promotes a violently anti-Black message that company is just as culpable as the person shouting.

Will you call on Google and other companies to end their sponsorships of a Trump-led convention?

In an interview with The New York Times, Color of Change PAC Executive Director Rashad Robinson alluded to possible riots occurring at the Cleveland convention, stating “These companies have a choice right now, a history-making choice, do they want riots brought to us by Coca-Cola?” The mention of riots at the convention is a rather intimidating word choice since Robinson alludes to the assumption that it would be the anti-conservative organization initiating it. As of now, only Leftist have been responsible for the spring of rioting that has been seen across the country as a result of Trump’s presence.

The transcript from the CBS This Morning June 2 segment is provided below.

NORAH O’DONNELL: Donald Trump's rhetoric has won millions of votes, but it may be scaring away sponsors from next month's Republican convention. Activists are pressuring past RNC sponsors to stay away from Cleveland. Hewlett Packard is the latest to say won't attend. The high-tech company says it will not contribute to either party convention. Julianna Goldman shows us why some corporations are nervous about associating with Trump. Julianna good morning.

JULIANNA GOLDMAN: Good morning. Well traditionally, the Republican and Democratic conventions are meant to introduce each party's candidates to a broader electorate and to the millions of people tuning in. With all eyes on Donald Trump's nominating convention, major companies seem to be staying away from the RNC, wary of potential damage to their own brands.

DONALD TRUMP: There's a great hatred toward Americans by large segments of the Muslim population.

GOLDMAN: Donald Trump's inflammatory comments have been a staple of his candidacy.

TRUMP The only card she has is the woman's card. She's got nothing else going, and frankly, if Hillary Clinton were a man, I don't think she'd get 5% of the vote.

GOLDMAN: And now that he's the presumptive Republican nominee, some corporate sponsors are distancing themselves from the Republican National Convention. Color of Change is a civil rights group trying to get sponsors to drop out. 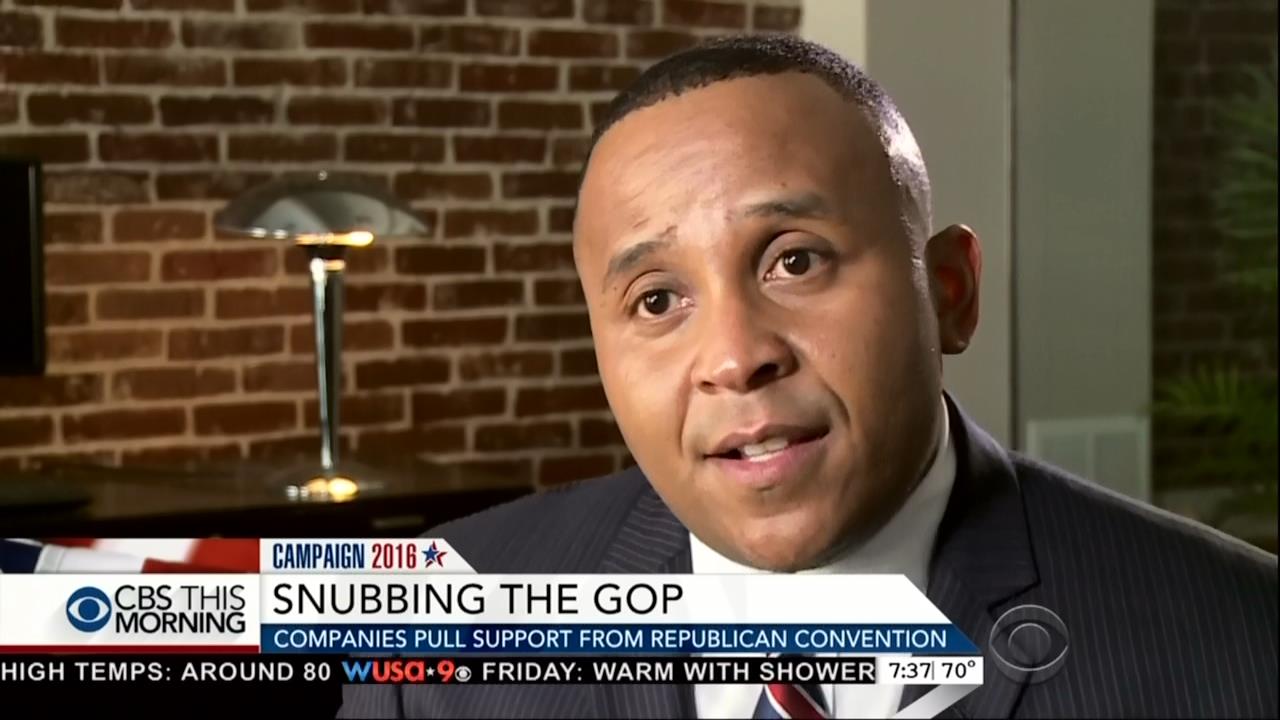 RASHAD ROBINSON: This moment is about corporations making a very clear decision about connecting their money and their resources to the type of hate that Donald Trump has been selling America.

GOLDMAN: Hewlett-Packard is one past participant that won't be playing a part this summer. According to Color of Change, the company provided over $556,000 in cash and in-kind donations four years ago. Microsoft, another RNC donors in 2012, won't be contributing any money this time. Just technical services and products. Coca-Cola, which gave $660,000 four years ago, donated just $75,000 this year.

NATALIE ZAMUDA: Brands are being very cautious around their messaging for the conventions because if they back away from the RNC, that's problematic, too.

GOLDMAN: Zamuda notes many sponsorships are locked up in advance. Google is still an RNC sponsor, so is Facebook, which says its involvement is a matter of civic duty.

ROBINSON: If any employee of a major fortune 500 company went to work and said the things that Donald Trump says on the campaign trail, they'd be fired.

GOLDMAN: Most of the companies we spike with stressed their decisions were nonpartisan. The Trump campaign did not respond to requests for comment. And Gayle, the RNC host committee told CBS This Morning" that it's raised nearly 90% of its budget.