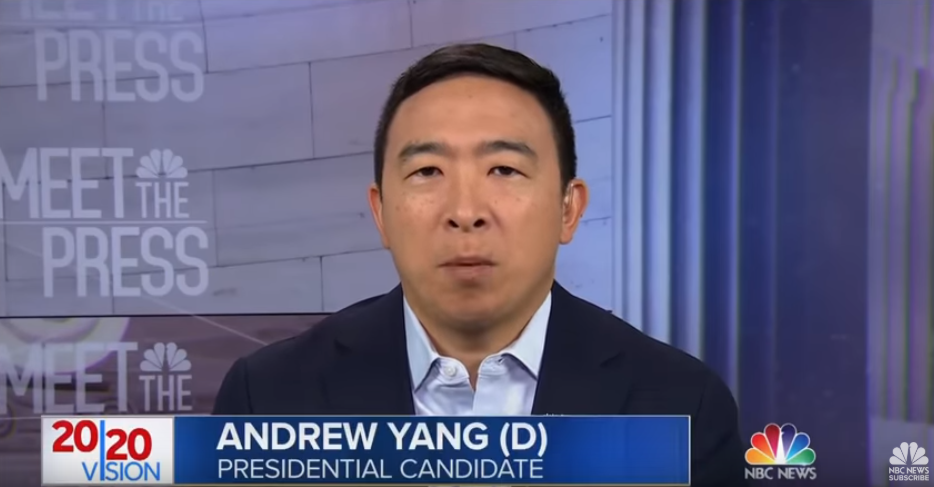 According to a page on Andrew Yang’s website, his liberal policies include providing Medicare for all, fighting climate change, providing a pathway to citizenship for “undocumented immigrants” and supporting LGBTQ+ rights. Despite that, Time magazine on Tuesday failed to label him a “liberal.”

Yang, a 44-year-old businessman who has proposed establishing a Universal Basic Income of $1,000 per month for each person 18 years of age and older, an idea that has proven popular with supporters who have been dubbed the “Yang Gang.”

According to an article posted on Tuesday by Time staff writer Lissandra Villa:

[O]utside of liking UBI, voters often called Yang “revolutionary,” a candidate who gave voice to their concerns about automation.

They like his candidness. And in particular, they like his ability to appeal to people across the aisle.

He's revolutionary, but also bipartisan? In addition, Villa noted: “Several voters either considered themselves moderates or conservative, and Yang has welcomed support from all ends of the political spectrum.”

The staff writer stated that Yang “is still a long-shot candidate. But less than 100 days before the Iowa caucuses and now less than a year away from the 2020 general election,” the Democratic candidate “raised more than $10 million” during the third quarter of 2019, which is comparable to California Senator Kamala Harris’s “$11.6 million haul” during that time.

“And he’s polled well enough (though still in the low single digits) to be one of only nine candidates to qualify for the November debate so far, which is better than several other candidates can say,” she noted. “He now even has a Super PAC backing him,” which can raise unlimited funds for his campaign.

“But as time has passed,” Villa stated, followers have “grown more and more convinced that Yang’s momentum will continue.”

The journalist spoke with Andrew O’Neill, a 23-year-old member of the Yang Gang, a group she described as “a fervent following with online roots.”

O’Neill told the Time reporter: “If this man can unite the YouTube comments section, then he can unite anything.”

I saw him make every single debate. I was like: “This guy has a real chance.”

As soon as I saw people start [to] flip over towards him, there’s not a doubt in my mind that he’s going to make it.

With that in mind, Yang used a rally held at George Mason University in a Washington, D.C., suburb on Monday evening as a chance to “give a shout out” to supporters of former Texas Congressman Robert Francis (Beto) O’Rourke “who had switched over to [Yang's] camp since [O'Rourke] dropped out" late last week.

Apparently none of Yang’s far-left views are worthy of labeling “liberal” for the editors at Time magazine. If he was a conservative, you can bet Time would have warned readers.