Just when it seemed that the ongoing controversy surrounding the nomination of Brett Kavanaugh to fill a vacancy on the Supreme Court couldn’t get more disgusting, the host of All In with Chris Hayes joined the fray by tweeting that confirming the candidate would be “like rape.”

The host of his own prime-time weeknight MSNBC program, Hayes drove the intense debate to a higher level on Friday, when he tweeted: 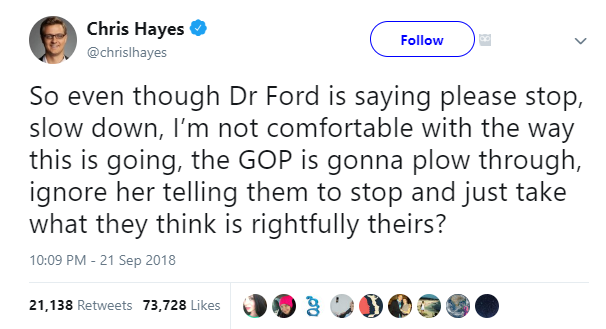 As if the accusation of Kavanaugh being a sexual predator wasn’t bad enough, Hayes actually came up with an accusation that actually compared the process to committing rape.

According to an article by Justin Caruso on the Breitbart website, “Hayes’ hot take came after Sen. Chuck Grassley,” chairman of the Senate Judiciary Committee, “set a deadline of 10 p.m. Friday night for Brett Kavanaugh’s accuser, Christine Blasey Ford, to decide if she would testify in front of the Senate.”

As NewsBusters previously reported, this is far from the first time the MSNBC host tried to escalate an ongoing debate. 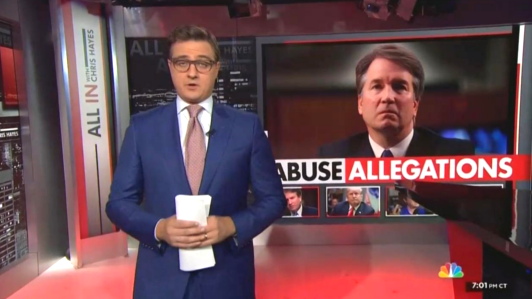 On August 1, 2013, the liberal commentator declared that he had “a little empathy” for kidnapper and rapist Ariel Castro. “There was a tiny, slight pin prick of empathy in me,” Hayes said even though Castro pleaded guilty to kidnapping three women and raping them repeatedly over a period of 10 years and was sentenced to life in prison plus 1,000 years.

But now, however, Hayes apparently doesn’t have even a pin prick of empathy for Brett Kavanaugh. The nominee for the open spot on the Supreme Court is being accused of sexual misconduct, claims he fervently denies and were never discovered during previous vetting over six previous investigations.

Instead, he’s joined the liberals and other people in the mainstream media trying to equate being a conservative Republican with being a serial rapist.