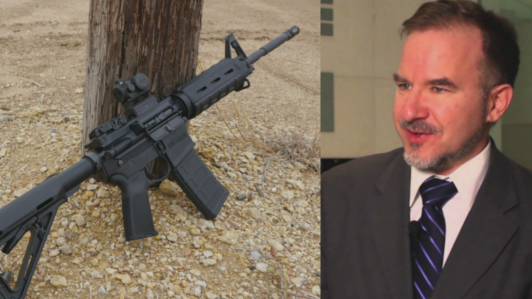 Neil Steinberg of the Chicago Sun-Times decided last week to purchase an AR-15 following the Pulse night club shooting in Orlando, Florida. His purpose, he said, was to demonstrate how simple it was and to explore Illinois’ gun laws concerning assault weapons.

When he bought the gun, Steinberg planned to sell it back to the store. However, his purchase was stopped by the gun store, which canceled the transaction during Illinois’ required 24-hour waiting period after discovering he had lied on his background check about his history of alcohol abuse and domestic violence.

In his article, Steinberg admitted that while driving to Maxon Shooter’s Supplies in Des Plaines, he was nervous because “I'd never owned a gun before,” and with the horror of the Orlando massacre “still echoing” in his mind, “even the pleasant summer day ... took on a grim aspect, the sweetness of fragile life flashing by as I headed into the Valley of Death.”

Earlier, in my editor’s office, I had ticked off the reasons for me not to buy a gun: This was a journalistic stunt; done repeatedly; supporting an industry I despise.

But as I tell people, I just work here, I don’t own the place. And my qualms melted as I dug into the issue.

Steinberg then “found that Illinois has a 24-hour waiting period between buying and taking possession of a gun. Unearthing that fact alone made the exercise seem worthwhile. I was learning something.”

“Reluctance melted when I walked into the large, well-lit store,” he noted. “Maxon’s looked like a meeting of the Mid-50ish Guy Club” with “a dozen grizzled men in ball caps milling around” near “the glassed-in shooting range.”

“I eyed the cases of weapons,” the reporter stated. “Despite the run on weaponry that happens after these shootings ... as gun fans guard against restrictions that never come, there were a few dozen assault rifles, including a Sig Sauer like the one used in Orlando.”

“I’m interested in one of the ARs,” he said, trying to project an air of manly ease to Rob, a clerk with a winged death’s head and a dagger tattooed on his right forearm.

“He immediately asked for my FOID (Firearm Owner’s Identification) Card -- no gun purchase without it,” Steinberg stated.

“Assault rifle” is a misnomer, the reporter asserted. “Despite what another clerk called the 'black, evil-looking' appearance of the guns, the only aspect relevant to the national debate is the 'standard issue 30-round magazine,' which holds a night club-clearing 30 bullets.”

“Eight states and the District of Columbia ban selling them,” he continued. “But not, of course, Florida. Or Illinois.”

“When you buy a gun,” the reporter then stated, “the person you are most likely to shoot, statistically, is yourself. And your family. More preschoolers are killed by guns than are police officers.”

When it came time to make the purchase, the clerk “handed me over to Mike, who gave his name while shaking my hand. I gave mine. 'The writer?' he asked.”

“'Yes,' I said, explaining that I planned to buy the gun, shoot at their range, then give it to the police. He suggested I sell it back to them instead, and I heartily agreed.”

Steinberg then “handed over my credit card: $842.50. Another $40 for the instructor to acquaint me with the gun the next day.”

“I was looking forward to shooting my new rifle the next day,” he stated. “I’ve shot guns. It’s fun. I was worried, though, about having fun with guns in the current environment of outrage and horror.”

However, “at 5:13, Sarah from Maxon called. They were canceling my sale and refunding my money. I … told her I assume they wouldn’t sell me a gun because I’m a reporter.”

“She denied it,” Steinberg stated. “But hating the media is right behind hating the government as a pastime for many gun owners.”

But according to an article by Blake Neff, a reporter with The Daily Caller website, Steinberg never contested the reason the gun store gave, namely “his history of alcohol abuse and domestic violence.”

“Gun makers avoid publicity because … they sell tools of death to frightened people and make a fortune doing so,” Steinberg claimed.

But since the reporter's “undercover” effort backfired and turned up no sign of illegal activities even when he lied about his past to the people at the store, Steinberg "shot himself in the foot" when the worst he could come up with was an imaginary hatred of journalists and government officials.