Politico DROPPED Obsession with Paul Pelosi Attack After Election Was Over 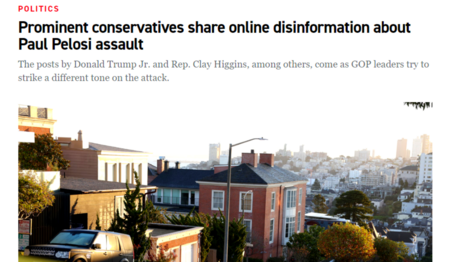 After a total of ELEVEN Paul Pelosi assault  stories appearing in the October 29 edition of Politico in which the alleged assailant, David DePape, was portrayed (with scant evidence) as a MAGA Republican for whom GOP officials were expected to apologize for, the sum total of these stories once the midterm elections were safely past dwindled to the extent that for the past couple of weeks, there has been no follow-up on the investigation of how this attack unfolded.

What makes it more curious is that after their October 31 attack upon conservatives for questioning the official account of the assault, there has been complete silence from Politico on the retraction of an NBC story and suspension of the reporter, Miguel Almaguer, for revealing that Paul Pelosi answered the door on the night the police arrived.

So why the incredible lack of curiosity by Politico over a story that it initially went into absurd overkill mode in promoting? Well, Politico inadvertently provided the reason in its final story related to Paul Pelosi on November 13, "Pelosi: Some people voted because political violence has ‘gone too far’."

House Speaker Nancy Pelosi said Sunday she knew of some individuals inspired to vote last week because of political violence, including the brutal attack on her husband.

“We’ve been so comforted by the outpouring of so many prayers and good wishes, and even people saying, ‘I wasn’t going to vote, but now I’m going to vote, because this has gone too far,’” Pelosi told host George Stephanopoulos on ABC’s “This Week.”

Therefore the politicization of the attack by Politico and much of the rest of the media has served its political purpose, so there is no further need to obsess over it now, especially since legitimate questions are being raised about what really happened and why the suppression of the NBC story and its reporter.

They did find space for a brief story on Virginia Gov. Glenn Youngkin apologizing in a letter to Nancy Pelosi for "making light" of the attack by suggesting voters should send Pelosi home to her husband.

Is it any wonder that fewer and fewer people now trust the media, including Politico, to provide anything approaching objectivity in their news coverage. The flip side is that more and more frequently people have to turn to alternative media to get closer to the truth as exemplified by this Megyn Kelly podcast (labeled by the New York Times as a "purveyor of misinformation"), which questions the official Paul Pelosi assault narrative.

Exit question: Will anyone in the press pull back Paul Pelosi from his current nonperson status and investigate why the post-election suppression of the assault story after having hyped it so heavily before the election?